4
Current ranking of Ryan Bader as a UFC light-heavyweight

14
Wins by “Darth” inside the Octagon, 2nd most in modern UFC light heavyweight history behind Jon Jones’ 16

7
Knockdowns by Bader, tied for most in UFC light-heavyweight history

4
KO/TKOs by Darth inside the Octagon including his most recent second round knockout of Ilir Latifi by knee at UFC Fight Night: Arlovski vs. Barnett, which earned Bader a Performance of the Night bonus
RELATED: Sao Paulo Fantasy Cheat Sheet | KO of the Week - Bader vs Latifi | Free Fight - Bader vs Nogueira

50
Seconds it took for Bader to secure a guillotine choke on Vladimir Matyushenko at UFC on FOX: Johnson vs. Dodson, fastest submission in modern UFC light-heavyweight history

41
Takedowns by Darth, 2nd most takedowns in UFC light-heavyweight history behind Rashad Evans’ 50

8
The Ultimate Fighter season Bader won as a light-heavyweight as a member of Antonio Rodrigo Nogueira’s team, which is Bader’s opponent’s twin brother

2011
Most recent calendar year, besides the current one, where Nogueira competed in two UFC fights

11
Current ranking of Thomas Almeida as a UFC bantamweight

95.2
Career finishing rate percentage by “Thominhas” as he has finished all but one of his opponents - his UFC debut unanimous decision win over Tim Gorman in November 2014

3
Consecutive knockouts by Almeida inside the Octagon

100
Percentage of Almeida’s first four UFC bouts that have earned bonuses - 3x Performance of the Night and 1x Fight of the Night, only UFC fighter thus far to start their career with four straight bonuses 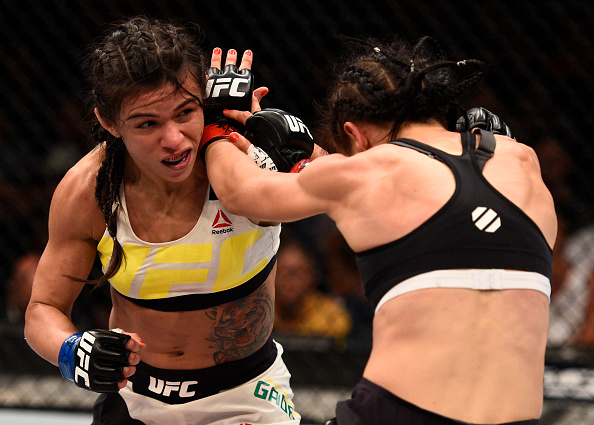 13-2
Pro record by “Claudinha” including two wins inside the Octagon and one win in Invicta FC, both losses by decision to current UFC women’s strawweight champion Joanna Jedrzejczyk

4+
Takedowns by Claudinha in all four of her UFC appearances

2
Of those finishes by Cast Iron occurred inside the Octagon in back-to-back bouts as Casey scored a knockout of Cristina Stanciu and, most recently, submitted Randa Markos via armbar at UFC 202