Take a closer look at UFC Fight Night: Belfort vs. Henderson 3 in this edition of By The Numbers. 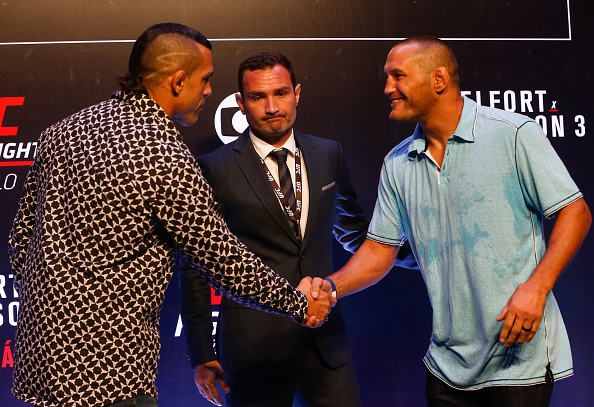 4
Current ranking of Vitor Belfort as a UFC middleweight

11
KO/TKOs by “The Phenom” inside the Octagon, tied with former UFC middleweight champion Anderson Silva for most in UFC history

3
Consecutive KO/TKOs by Belfort via head kick over Michael Bisping, Luke Rockhold and Dan Henderson, only fighter in UFC history to accomplish such a task

12
First round finishes by The Phenom inside the Octagon, most in UFC history

77
Seconds it took for Belfort to score two knockdowns and a KO/TKO of Dan Henderson in their second meeting at UFC Fight Night: Belfort vs. Henderson

12
Current ranking of Dan Henderson as a UFC middleweight

28
Seconds it took for Henderson to score a KO of Tim Boetsch at UFC Fight Night: Boetsch vs. Henderson

19
Knockdowns by Henderson in UFC/PRIDE/Strikeforce/WEC, 2nd most in combined history behind Wanderlei Silva’s 27 knockdowns

11
Career wins by Henderson over current or former UFC, PRIDE or Strikeforce champions

48
Takedowns by Henderson in UFC/PRIDE/Strikeforce, 4th most takedowns by a fighter at 183 pounds or higher

87.5
Percentage of Henderson’s career takedowns starting from the clinch

1992, 1996
Years that Henderson competed as a member of the US Olympic Greco-Roman wrestling team

4
Current ranking of Glover Teixeira as a UFC light-heavyweight

321
Sig. strikes landed by Teixeira inside the Octagon

9
Current ranking of Patrick Cummins as a UFC light-heavyweight

26
Takedowns by Cummins, 3rd most among active UFC light-heavyweights

10
Of those takedowns by Cummins came against Kyle Kingsbury, 2nd most ever landed in a UFC light-heavyweight fight behind Rodney Wallace’s 11 against Jared Hamman