Six years have passed since the first bout between Ryan Bader and Rogerio Nogueira, and while the first bout wasn’t a barnburner by any means, things might be a little different this time around. Back then, Bader was strictly a wrestler and he used his wrestling to win that fight. He’s developed his striking since then, and while he’s no Nogueira on the feet, he may be willing to stand and see what “Little Nog” has left in his fists and his chin. If that’s the case, it could get interesting real quick in Sao Paulo. 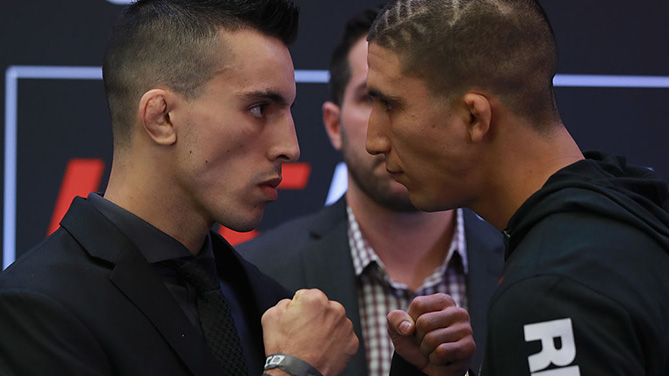 Albert Morales’ willingness to face Thomas Almeida in Almeida’s hometown two months after his UFC debut can mean one of two things. A) Morales is living up to his “Warrior” nickname, or B) Morales believes that Almeida’s KO loss to Cody Garbrandt in May showed the kind of holes he can capitalize on this weekend. Either way, this is an important bout for Almeida, and one that would be costly to lose.

Kudos to UFC matchmaker Sean Shelby, because I LOVE this matchup. Claudia Gadelha is the No. 1-ranked strawweight in the world and a former world title challenger, hence the rightful favorite here. But Cortney Casey is an underdog no one should sleep on. She’s finished each of her pro victories, including two in the UFC, and in the two Octagon bouts she lost, she won Fight of the Night honors. This is my pick for Fight of the Night in Sao Paulo.

If most fighters had an 18-1 record with four consecutive UFC wins, you’d likely hear about it. But Krzysztof Jotko isn’t the bragging type, so he’s remained under the radar. That won’t be the case anymore if he can beat perennial contender Thales Leites for his fifth straight win. Then, you will know who Jotko is. 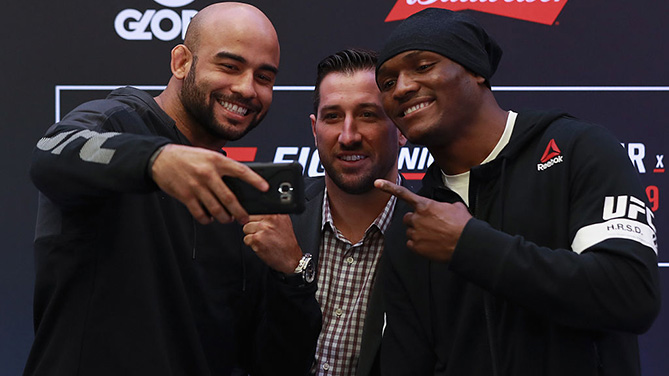 Former TUF winners Kamaru Usman and Warlley Alves collide in perhaps the most evenly matched and intriguing matchup on this card. If you’re making a list of the top welterweight prospects, both fighters should be at the top of this list, and if you think either man is running away with this one, that would be a shocker.

Zak Ottow was more workmanlike than spectacular in his short-notice UFC debut win over Joshua Burkman, but he proved that he’s one of those fighters that will do what it takes to get the job done. That may be just what the doctor ordered against Brazilian vet Sergio Moraes.

Jack “The Joker” Hermansson was impressive in his Octagon debut against Scott Askham in September, and this weekend he’ll look to make it two straight against former TUF winner Cezar Ferreira, whose recent two fight winning streak shows him on the verge of finding the consistency he needs to make some noise in the middleweight division.

With finishes in 17 of his 18 pro wins, Gadzhimurad Antigulov is the latest native of Dagestan to enter the UFC with high expectations placed on his shoulders, and he’s a solid addition to the 205-pound weight class. But he’s got to be careful, because Marcos Rogerio de Lima has the power to knock those expectations and Antigulov’s head off those shoulders, making this quite the stylistic matchup.

There’s no title fight or top 10 ranking on the line in this bout between Manvel Gamburyan and Johnny Eduardo, but it’s going to be fun to watch these two veterans match wits in the Octagon.

Christian Colombo was a point deduction away from a victory in his UFC debut against Jarjis Danho earlier this year, so he’ll be even more eager to enter the win column this week. Unfortunately, if he gets too aggressive, Brazilian young gun Luis Henrique is the kind of fighter that can make him pay in a hurry.

While erratic at times, Justin Scoggins showed enough flashes of brilliance to mark him as a future contender at 125 pounds. But weight issues have forced him to the bantamweight division, and there are few tougher tests for him in his 135-pound debut than fellow up and comer Pedro Munhoz.

You’ve got to respect 7-0 Darren “The Dentist” Stewart for traveling to Brazil to face a 23-fight veteran in Francimar Barroso, but that perfect record has obviously given the Londoner enough confidence to battle both Barroso and the crowd in Sao Paulo in what should be a fun opener.