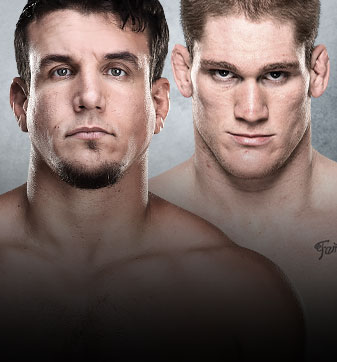 It's always a fun night when the heavyweights are in the main event, and this time around it's former champion Frank Mir looking to build momentum from his last win over Antonio “Bigfoot” Silva when he faces heavy-handed striker Todd Duffee in a five-round fight from San Diego.

Mir was against the ropes going into his last fight after dropping several fights in a row, but the former champion came out looking better than ever as he put away Silva in impressive fashion in the first round. Duffee has been equally as impressive since coming back to the UFC, and with the work he's doing at American Top Team in Florida, the sky's the limit for this heavyweight slugger.

As we gear up for this week's UFC Fight Night card from San Diego, today's fantasy preview will dig into some of those key matchups and see who is favored to win and if there might even be a couple of upsets brewing on this special Wednesday night show.

Todd Duffee lobbied for weeks to land a fight with Frank Mir and now he's finally got him this week and he'll walk into their bout as the favorite, despite his opponent having more fights in the UFC than the American Top Team fighter does in his entire career.

Duffee sees Mir as his gateway to the top 15 and there's obviously something about this matchup that he likes a lot.

Duffee is a blitzing power puncher with bricks for hands and he launches them like missiles rarely aimed for anything other than a knockout. Duffee is a first-round finisher who has the ability to put anybody in the heavyweight division away if they aren't careful.  Duffee is still largely untested, however, because he rarely gives his opponents the chance to even see round two. That said, Duffee has only gone into the second round and beyond twice in his career so there have to be some questions on what happens if he doesn't get the quick finish.

Mir is definitely a more proven commodity, but does his one win over Silva earlier this year erase all the problems he had prior to that fight? Mir hasn't submitted an opponent since he put away Antonio Rodrigo Nogueira in 2012, and during his four-fight losing streak he struggled to get any fights to the ground unless someone else was putting him there.

Mir has improved his striking dramatically over the years and now he possesses the kind of boxing that can give opponents trouble, but his tendency to throw short inside leg kicks could backfire against a fighter like Duffee.  Mir likes to toss out those kicks to gauge distance and get his opponents thinking about him going low before he counters high, but the problem is that he often ducks his head to one side or the other when throwing the kick, and that could spell disaster if Duffee times it right and fires one big punch that lands directly on target.

If Duffee doesn't go out like a ball of fire and just try to torch Mir and instead allows the fight to come to him, he should be able to put together a combination to put the former heavyweight champion on the ground once and for all.

Prediction: Todd Duffee by TKO, Round 1

Tony Ferguson will attempt to keep his winning streak alive when he faces former Strikeforce champion Josh Thomson in an exciting lightweight matchup.

Ferguson has become a finishing machine lately, with four of his last five fights ending by way of knockout or submission. Ferguson has found his groove with a tenacious wrestling game and powerful hands. Maybe above all else, Ferguson has learned patience, which allows him to sit back and wait for his opportunities instead of rushing forward trying to make something happen.

Thomson is still a top-flight lightweight with years of veteran experience under his belt. He's got good wrestling credentials mixed with a very good kickboxing game where he can batter an opponent with punches and kicks from the outside. Thomson is also deceptively strong, which he showcased in his fight with Benson Henderson, who is one of the biggest lightweights in the division.

Where Ferguson can try to take advantage is with his wrestling game, and he's landing takedowns at nearly 67-percent accuracy. Ferguson is a master of putting his opponents in bad positions and while he might not catch Thomson in a submission, his ability to take him to the ground and work from the top could be the difference when it comes to a potentially close decision.

Thomson has fallen victim to a couple close, controversial decisions lately, so it makes you wonder if this one-time lightweight contender might have it in his head that he has to take more chances, which could then force him into a mistake and Ferguson will be ready to pounce.

This fight might serve as a passing of the torch with Ferguson getting a big win over an established lightweight like Thomson, who is still one of the best 155 pounders in the game today.

Kevin Lee will look for his fourth straight win inside the Octagon when he faces James Moontasri in an interesting lightweight battle.

Lee has proven to be a tough customer for anyone at 155 pounds with his mix of powerful wrestling and boxing on the feet. Lee is well-rounded, but he'll always have his wrestling game to fall back on if things aren't going his way, and that makes for the ultimate equalizer in a fight like this.

Moontasri fell victim to a similar fighter in his first appearance in the UFC when he faced Joe Ellenberger and lost by split decision. Moontasri returned in great form for his last fight, but facing another wrestler could spell disaster if he hasn't improved his grappling over the last year.

Lee is averaging over three takedowns per 15 minutes in the cage while also landing 3.73 significant strikes per minute. If he's able to mix things up with equal portions doled out against Moontasri, “The Motown Phenom” should get his fourth win in a row. If he can't get this fight to the ground at all, however, Moontasri has a great chance to steal this one with superior striking by using range and distance to give Lee nightmares for all three rounds.

Jouban is a nasty kickboxer who is averaging over five significant strikes landed per minute with over 51-percent accuracy thus far in his UFC career. While he has shown less than stellar defense through his first few fights with the promotion, Jouban dishes out plenty of punishment in return.

Dwyer can be just as menacing on his feet, as showcased in his last fight, where he knocked out his opponent with a spectacular Superman punch, but playing the striking game with Jouban will probably end poorly for him.

Jouban connects with huge power from the outside, and inside and he's got a truckload of different weapons when he's unleashing his combinations. Jouban has an over 81-percent finishing rate throughout his career and he'll certainly be looking for the knockout with a willing opponent like Dwyer.

Unless Dwyer somehow finds a way to work through Jouban's power and technique, he's going to wake up staring at the lights while his opponent starts celebrating a potential bonus for a great knockout.

Prediction: Alan Jouban by knockout, Round 2

Now here's where things get really interesting on this San Diego card.

Marion Reneau comes into her fight as a near 2-to-1 underdog to former boxing champ Holly Holm, and this matchup might be primed for an upset.  Reneau has looked outstanding since debuting in the UFC with a dangerous striking attack that she backs up with a very good jiu-jitsu game on the ground. Reneau has looked like a potential top five challenger in the future through her first two fights and she might be even closer if she can take Holm out in this fight.

Holm is still considered one of the best prospects in the 135-pound women's division, but she didn't exactly look like a world-beater in her debut. Holm possesses all the talent in the world to be the deadliest striker at bantamweight, but if she can't find a way to pull the trigger in this fight she might be staring back at her first loss in MMA.

Reneau shows no fear when she's striking and that's the same kind of tenacity Raquel Pennington used to nearly shut down Holm when they met back in August. If Reneau can get Holm to back up and play defense, she has a great chance to dictate the pace and really dominate, even if this fight stays standing the entire time.  Holm still has one shot knockout power, so Reneau can't get too fancy while she's striking with the former boxing champion, but if she shows the kind of pop in her punches that she had in her first two fights, this could be her fight to win.

Andrew Craig drops down to welterweight for a fight against promotional newcomer Lyman Good, who accepts this fight on short notice after Craig’s original opponent dropped out due to injury.  Good is a sizable favorite in this matchup despite fighting on just a couple of weeks’ notice, but given the reality of UFC jitters and Craig being a tough out for anyone in their first fight, this could be an upset just waiting to happen.

Craig isn't nearly as technical as good on the feet, but he can still land a haymaker with the best of them. To get ready for Good, Craig called upon former Olympian Ben Askren to help with his wrestling and get some pointers since he already fought and defeated the New Yorker in a previous fight.

Craig won't become a top-level grappler like Askren overnight, but training with him shows that he's willing to exploit Good's biggest weakness, which has traditionally been his ground game. Craig doesn't have to grind Good out to a decision to get the win, but he has to keep the first-time UFC fighter guessing and that could be the difference in this matchup. As long as Craig keeps Good honest with the threat of his wrestling, he should be able to eke out a victory in his welterweight debut.