Fight Night Rio: By The Numbers

Take a closer look at Fight Night Rio in this edition of By The Numbers. 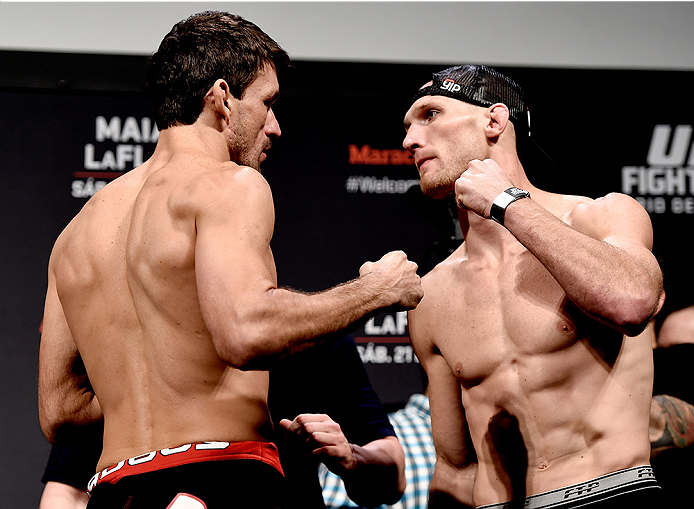 7
Current ranking of Demian Maia as a UFC welterweight

6
Submission wins by Maia inside the Octagon, tied for 3rd most in modern UFC history (post UFC 28)

5
Consecutive submission wins by Maia, only fighter to do so in modern UFC history (post UFC 28)

4
Submission of the Night bonuses by Maia, tied for 3rd most in UFC history

4
First round submission wins by Maia including his rear naked choke of Rick Story at UFC 153, tied for 3rd most in modern UFC history (post UFC 28)

9.85
Takedown attempts per 15 minutes of fighting by Maia

14
Current ranking of Ryan LaFlare as a UFC welterweight

11
Wins and 0 losses by LaFlare as an MMA pro

4
Of those wins are inside the Octagon, tied with Stephen Thompson for the 2nd longest active win streak in the welterweight division behind Neil Magny’s 6

4.75
Takedowns landed per 15 minutes of fighting by LaFlare, UFC average 1.75

100
Percentage of Erick Silva’s wins by first round finish in the UFC - KO of Luis Ramos, rear naked choke of Charlie Brenneman, inverted triangle armbar of Jason High, TKO of Takenori Sato and, most recently, arm-triangle choke of Mike Rhodes

75
Seconds for “Indio” to secure the choke of Rhodes at UFC Fight Night: Machida vs. Dollaway earning Silva a Performance of the Night bonus

2.4
Submissions attempted average per 15 minutes of fighting by Indio, 2nd most among active UFC welterweights

100
Percentage of Silva’s 18 significant strikes attempted that landed against Sato at UFC Fight Night: Machida vs. Mousasi, which broke an esoteric record previously held by Anderson Silva with win over James “Sandman” Irvin where he went 13 for 13 with significant strikes

0
Significant strikes landed by Carlo Prater, Jason High and/or Sato against Silva, only fighter in UFC history to have 3 fights with 0 strikes absorbed

3:50:14
Total fight time by Koscheck inside the Octagon, 2nd most in UFC welterweight history behind Georges St-Pierre’s 5:28:12

14
Wins by Koscheck inside the Octagon, 3rd most in UFC welterweight history behind Matt Hughes’ 16 and Georges St-Pierre’s 19

8
Finishes by Koscheck, 4th most in UFC welterweight history

5
KO/TKOs by Koscheck, tied for 5th most in UFC welterweight history

38
Takedowns by Koscheck, 3rd most among active UFC welterweights