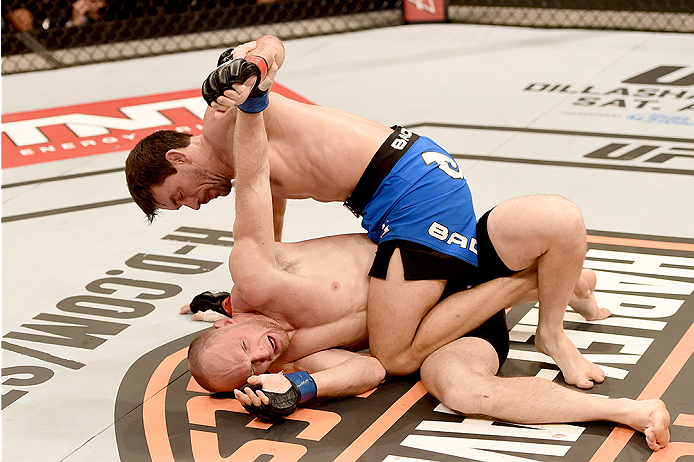 APPRECIATING MAIA
Demian Maia’s Saturday win in Rio over Ryan LaFlare wasn’t the 2015 Fight of the Year. Let’s get that out of the way. Yet when it comes to pure performance under the bright lights, Maia delivered one of those efforts that remind you just how effective the ground game can be in MMA when executed right. It wasn’t one of those fights where Maia grounded LaFlare and just stayed in the top position and stalled; he was constantly looking to improve his position or find a submission, and he kept firing short strikes throughout. That activity level was due in part to LaFlare’s game attempts to escape throughout, and he was seemingly one hard shot or flurry away from victory as he chased an exhausted Maia in the fifth round. Was it an action-packed thriller? No, but it was still an enjoyable chess match to watch, and one that showed Maia to still be a professor on the mat.

KOS
I’m going to save any post-career retrospectives on Josh Koscheck until he makes that retirement call himself, but after his fifth straight loss on Saturday night, it does look like “Kos” may be walking off into the sunset after a stellar career in the Octagon. One of the truest of “true fighters,” Koscheck never turned down a fight, never shied away from a challenge, and he always tested himself against the best in the world. And though he didn’t win them all, showing up is often half the battle, and the confident (okay, cocky) Californian always showed up.

SILVA ON THE UPSWING?
Listening to some of the pre-fight chatter last week, you would have thought that Erick Silva was a 40-year-old pug on his last legs leading into his Saturday bout against Josh Koscheck. Yes, his inconsistency has been an issue, one covered in this space, but if you look at the losses Silva suffered over the course of his UFC career, he went through a controversial DQ against Carlo Prater, got caught by a perfect shot from Dong Hyun Kim, and dropped Fight of the Night wars to Jon Fitch and Matt Brown. In my eyes, Silva’s problem has been an inability to close the show in the big fights, namely the Fitch and Brown fights where he was on the verge of victory at times before losing. Well, now he’s got his first two-fight UFC winning streak and maybe the talk of him never getting to the next level will at least get a little quieter. He’s 30, he’s exciting, and he can beat 80% of the welterweights out there. Now he has to prove he can get by that other 20%.

THE BURNS COMEBACK
Poor Gilbert Burns. This time last week, he was the unbeaten, unstoppable prospect. Today, he’s still unbeaten and still a top prospect, but so many are questioning that “unstoppable” thing after he had to score a come from behind win over Alex Oliveira last Saturday. So let’s stop the nonsense now. These are fights we’re watching, and if you get the call to the UFC, it’s because the matchmakers believe you can hang and succeed at this level. Alex Oliveira had everything to gain when he was brought in to replace the injured Josh Thomson on short notice, and he fought his heart out in Rio. Burns, a heavy favorite, had everything to lose and little to gain, but in a lose-lose situation like that, “Durinho” showed something many hot prospects fail at the first time they’re faced with adversity. He showed a champion’s heart and determination, and he roared back in the third and final round to win the fight. So let’s discard the comments about him not showing off his talent until he had to. Burns was in a fight Saturday night against a determined opponent, he faced adversity, and he came back and found a way to win. I was high on Burns’ potential before Saturday night, and I’m even more convinced after the fight.

PEPEY AND SOUZA
As much as it pains me to write this, the icons of Brazilian MMA, guys like Anderson Silva, Shogun Rua and the Nogueira Brothers, will not fight forever. Hey, it’s the fight game, these things happen. So now we must start looking to the next generation, the one that will make an impact in the title picture five years or so down the line. And though trying to match what the aforementioned stars accomplished in their careers is a lofty and likely unreachable goal, I really enjoy watching Godofredo Pepey and Kevin Souza fight, and if they can remain in the UFC picture for several more years, then Brazilian MMA will be doing just fine because it’s not always about the wins and losses but about how a fighter fights.

THIS AND THAT
With a 3-0-1 record thus far in his UFC career, and a finish of Tony Martin last Saturday, former TUF Brazil winner Leonardo Santos may end up being a dark horse contender at 155 pounds. He’s got the tools to give anyone a tough go in the division, and at 35, expect him to be in a position to accelerate things in the coming months if he’s going to make a run at the top dogs…Amanda Nunes looked frighteningly sharp in her return to the Octagon against Shayna Baszler. I don’t expect too many bantamweights will be lining up to face “The Lioness” in the coming months…Leonardo Mafra and Christos Giagos showed what you want to see from fighters after a debut loss in their wins over Cain Carrizosa and Jorge de Oliveira, respectively. They made adjustments left that previous fight in the past, and moved forward. The result was an impressive win from both lightweights…With just two pro fights, you don’t want to rush Fredy Serrano into the flyweight title picture, but he’s got the power and the Olympic wrestling experience to eventually make a lot of noise at 125 pounds…I wouldn’t want to be a referee. It’s probably the toughest job in combat sports, one where you only get noticed if you screw up. Well, Eduardo Herdy screwed up Saturday night when he stopped the bout between Leandro Silva and Drew Dober, declaring the Silva won via submission. The only problem was that Dober didn’t tap, didn’t come close to showing a tap, and was actually pulling his head out from Silva’s guillotine choke when Herdy pulled the plug on the fight. It was easily the worst call I’ve seen in 15 years of covering this sport, and while the UFC paid Dober his win bonus, that loss remains on his record. Kudos to Dober for taking that “defeat” with class; not many would have showed such restraint.