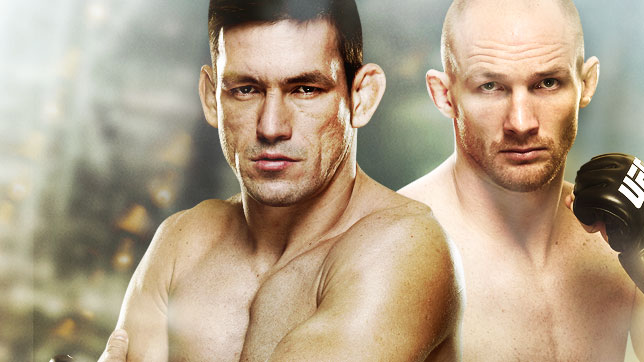 The UFC returns to Brazil this weekend with a welterweight doubleheader at the top of the card, as submission specialist Demian Maia takes on undefeated prospect Ryan LaFlare while perennial finisher Erick Silva faces former Ultimate Fighter season one competitor Josh Koscheck.

Both Maia and LaFlare have been out of action due to injuries, but with the welterweight division in constant need of contenders, the winner of this fight will be in prime position for a big run in 2015.

Meanwhile in the co-main event, Silva looks to finally establish himself as an elite fighter in the welterweight division as he faces Koscheck, who accepts this fight just a few weeks after his last bout at UFC 184 in Los Angeles.

As we gear up for another stellar night of fights, today's fantasy preview will help break down some of these key matchups and see who has the best chance to walk away victorious on Saturday night in Rio.

These are the fights that are just too close to call, with each fighter standing a great chance of coming away with a victory, but a few key points could mean the difference between winning or losing in the final tally of the fantasy game.

It's been nearly a year since Ryan LaFlare last fought in the UFC, but he hopes to pick up right where he left off after winning his first four fights to bump his record to 11-0 overall.  LaFlare is a tough combination to deal with when he's on his game, as he presents trouble both on the feet and on the mat.

LaFlare averages over four significant strikes landed per minute, which is more than double the output of his opponent Demian Maia.  He also mixes in a blitz of takedowns where he's currently averaging 4.75 per 15 minutes in the cage.  LaFlare's ability to dictate where this fight goes could be a big key to his victory.

As for Maia, he's well-known as the craftiest submission specialist in the UFC, with a deadly arsenal of finishing maneuvers, not to mention a much improved boxing game on the feet.  Statistically, nothing Maia does jumps out at you, but he's consistently good on the feet or on the ground.  Maia is dangerous everywhere, but his ground game is world-class and the last place anyone in the UFC should want to be is on the mat with this top 10-ranked welterweight draped on top of them.

Where LaFlare gains a slight edge is with his wrestling, where he's averaging just under 60-percent accuracy with his takedowns, and the pace he sets on the feet with his varied number of combinations.  If LaFlare can keep Maia guessing on whether he's going to throw a punch or shoot for a takedown, that will likely be the difference between winning and losing this fight.  Maia is more than capable of snatching a fight-ending submission at any moment, but LaFlare is well versed enough to not fall into any obvious traps, and if he fights with a fundamentally sound strategy, he should make it out of Brazil with a win.

A clash of submission specialists goes down in this lightweight matchup as Leonardo Santos takes on Tony Martin.

Santos has remained undefeated in his UFC career, most recently picking up a win over Ultimate Fighter Latin America coach Efrain Escudero, while Martin is fresh off a submission win over Fabricio Camoes in his last bout.

Santos is an accomplished Brazilian Jiu-Jitsu practitioner with submission victories in numerous fights, including his UFC debut over William Macario.  Santos has worked hard on his striking game as well, as witnessed in his last two bouts against Escudero and TUF: The Smashes winner Norman Parke.  Santos will have to rely more on technique in this fight because Martin is a brute for 155 pounds, and his confidence is soaring after his recent win in the UFC.

Martin is a phenomenal athlete competing in the lightweight division with good accuracy in his striking and a dynamic ground attack.  Martin showed real potential with his submission win against Camoes and a victory in Brazil this weekend would do wonders for his long-term success in the Octagon

A slight edge still goes to Santos, however, because as much as this fight might end up as a striking battle between two submission specialists, the Brazilian is just a better fundamental fighter on the feet.  It's going to be a game of inches and a few strikes might separate winner from loser in this one.  In the six main card fights on Saturday night, this might be the toughest to choose a winner.

This lightweight matchup between Andre Fili and Godofredo Pepey could end up being the show stealer and Fight of the Night if things play out right.

Fili has proven to be a great addition to the UFC roster since joining the promotion, and Pepey has been non-stop excitement in all of his fights after appearing on the first season of The Ultimate Fighter Brazil.

Pepey is an unpredictable mix of knockout power on the feet and submission skills on the mat. He's also picked up two very impressive victories lately with Performance of the Night bonuses earned against Noad Lahat and Dashon Johnson in back-to-back fights.  If there's a knock on Pepey's style, it's the fact that he gets a little wild at times and it has cost him in past fights.

Fili is very similar in the way he fights because he tends to enjoy a good old-fashioned slugfest from time-to-time as opposed to a more controlled, methodical pace. It leads to exciting fights, but also sometimes lands him in some dangerous positions.

Still, Fili will enter the fight with a decided height and reach advantage over Pepey and as long as he doesn't leave too many openings in the exchanges, he should be able to tag the Brazilian with some hard shots from the outside before charging in for the finish.

Prediction: Andre Fili by TKO, round 3

These are the fights that are a little more lopsided in the odds and should be a much easier selection when it comes to winning and losing.  What may matter most is how these fights come to an end.

Despite some inconsistencies during his time with the UFC, Erick Silva remains one of the most dangerous fighters in the world at 170 pounds and he should get a chance to showcase that this weekend in his bout against Josh Koscheck.

Silva is as heavy-handed as they come in the welterweight division and unfortunately Koscheck's ability to take a punch isn't what it once was early in his career.  A broken orbital bone near his eye from a fight with Georges St-Pierre has forced Koscheck to adapt his style while standing and as witnessed from his last bout against Jake Ellenberger, the former Ultimate Fighter contender just doesn't look comfortable once he gets hit.

If there's one thing you can count on in an Erick Silva fight - he's going to hit you.

Unless Koscheck can find a way to land one of his signature overhand rights or put Silva down on the mat with his wrestling and hope to keep him there, this could be a very short night for the veteran welterweight.

Prediction: Erick Silva by KO, Round 1

Brazilian bantamweight Amanda Nunes was just seconds away from beating top-ranked women's contender Cat Zingano in her last fight before the matchup slipped away from her after almost getting the win in round one.  Nunes showed a fierce ground game, where she absolutely pummeled Zingano on the mat with a barrage of punches and elbows that nearly won her the fight.

For her next matchup, Nunes should get a chance to show off some of the same moves, except this time it should earn her a victory.  Shayna Baszler is a true legend of women's MMA and one of the toughest fighters on the planet, but she hasn't looked like a top 10 fighter since coming to the UFC.

Baszler is capable of wrapping up a submission in this fight, but chances are she's going to find herself planted on the mat, eating shots from above with Nunes just gunning for a finish. Given the way her last fight went, Nunes might be better served to control her punches in the first round, just in case Baszler refuses to go away, but in the end, the result is still the same.

Prediction: Amanda Nunes by TKO, round 2

Francisco Trinaldo looks to pick up back-to-back wins for the first time in the UFC in nearly two years when he meets Akbarh Arreola on Saturday night.

Trinaldo has proven to be an impossibly tough fighter for anyone at 155 pounds to face, as he has better than average stand-up and a solid ground game to match. Trinaldo doesn't do any one thing well, which makes him that much more dangerous everywhere the fight goes. He lands punches with nearly 49 percent accuracy while mixing in takedowns, where he can count on a very good submission arsenal at his disposal.

Arreola didn't get to show much in his UFC debut in a rather uninspiring performance, but he certainly proved he could hang with the best in his second fight when he put away former top-ranked lightweight Yves Edwards in the first round.  The word from Arreola's camp was that he's finally acclimated to life in the UFC and moved past any possible nerves he may have had early on.

If Arreola attacks with the same kind of relentless ferocity he did against Edwards, he should find a way to win.  Arreola has good submission skills to give Trinaldo problems on the mat and his striking is powerful.  With a 96-percent finishing rate, Arreola isn't a big fan of allowing his fights to go to the judges' scorecards either.

Prediction: Akbarh Arreola by submission, round 2