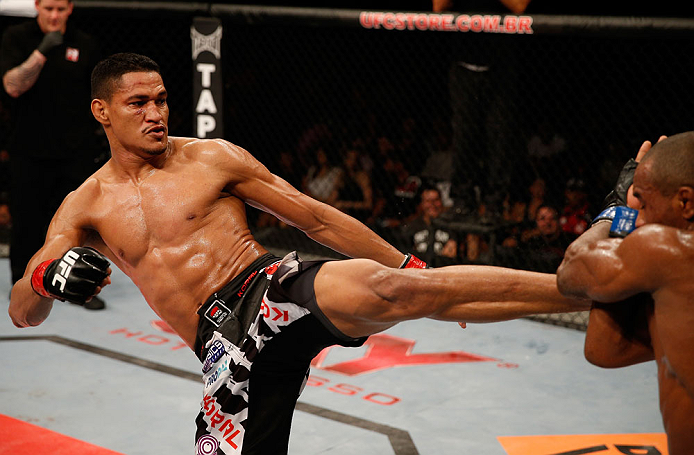 One of the best parts about the UFC Fight Night cards traveling to areas like Brazil are all the young, up and coming fighters that get discovered by making an impression on a show like the one coming up on October 9 from Barueri.

The main card features a who's who list of UFC contenders, top ten fighters and those who want to start entering title shot conversations.

The undercard may not have as much in terms of pure name value, but there are certainly some talented competitors who will be fighting on the prelims, and by night's end, some of them may have even earned some of that much coveted bonus money.

In today's fantasy preview, we check out the preliminary card to see whose stock is rising and whose might be falling by the time the UFC leaves Brazil.

1) Ildemar Alcantara is another prospect to watch on this UFC Fight Night undercard.  A former light heavyweight who has now miraculously dropped all the way to welterweight, Alcantara is a solid kickboxer who admittedly put on a sloppy performance in his last fight against Leandro Silva, but still came away with the victory.  With size and power on his side, Alcantara's record shows that he's quite competent on the feet or on the ground, but in this fight against Igor Araujo, he'll probably want to keep it standing.  Araujo is a former Ultimate Fighter contestant who has a very solid winning record, but that struggles against top talent.  Alcantara is exactly that, and maybe more if he can go out and finish Araujo the way he did Wagner Prado in his UFC debut.  This is a chance for Alcantara to make a statement, and erase the memories of his last fight.  Araujo does have a good team behind him, as he trains at Greg Jackson's in New Mexico, but a competent coach and corner probably won't get him the win in this one.  Expect Alcantara to feed off of the home Brazilian crowd and put some serious fists on Araujo's head.

2) Yan Cabral could have been The Ultimate Fighter Brazil season two winner if not for a broken hand. Cabral is a nasty submission specialist who looked like an early favorite for his coach Fabricio Werdum, but the injury forced him out of the competition. Now he faces fellow Brazilian jiu-jitsu practitioner David Mitchell at UFC Fight Night.  Mitchell is fighting with his back against the wall after losing three of his last four fights in the UFC.  Mitchell may be the more well rounded fighter in this bout, but Cabral is going to be a lot of fun to watch during his UFC career.  Cabral is slick and crafty on the mat, and all 10 of his career wins come by submission - the last of which is over PRIDE legend Kazushi Sakuraba in 2011.  Mitchell is no slouch, training jiu-jitsu under former UFC contender David Terrell, but this is Cabral's show. He will use a high pace to keep Mitchell at bay and then start looking for arms, legs or chokes to finish this one quick.

3) Desperation can sometimes bring out the best or the worst in fighters, depending on how things play out.  In the flyweight fight between Chris Cariaso and Iliarde Santos, with both men coming in off back-to-back losses, a win is paramount or the loser could be looking for a job.  Cariaso is the higher level fighter in this matchup, having fought for a big part of his career at bantamweight, where he holds wins over Takeya Mizugaki, Vaughan Lee and went to a close decision against Michael McDonald.  His last two fights have ended in losses, but he kept it close in both bouts.  As for Santos, he hasn’t been as lucky, losing to Iuri Alcantara and Ian McCall in fairly one-sided bouts.  Long story short, this is Cariaso's fight to lose.  His ranking is still giving him a place in the top ten, and now he really needs to earn it.