2019 has given fight fans plenty of memorable fights. Here's how every Fight of the Night this year stacks up against each other.
By Gavin Porter • Apr. 15, 2019

Fight Of The Night honors is the type of recognition that fighters look to associate with their name.

Earning FOTN indicates that the bout produces adrenaline, excitement and fireworks in way that stood out from the rest of the card. That stand-out fight could come in the form of a back and forth brawl, a fast-paced slugfest or an incredible display of high-level martial arts.

At UFC 236 both the main and co-main event were declared FOTN, sparking the concept of this piece.

Starting with UFC Saint Petersburg, UFC.com will list out and update the power rankings of each 2019 FOTN ending the calendar year with a complete picture of the year’s best fights.

The criteria applied to each ranking includes: Entertainment value, watchability, competitiveness (back and forth), the type of fight (technical vs brawl vs well-rounded), intensity (crazy moments) and the quality of the finish (if there is one).

Each fight is viewed as if they are in a vacuum, meaning the context surrounding a fight does not factor into the rankings. For example: A title fight could definitely have more implications that the opening fight on the prelims, but the best fight based off the given criteria will receive the highest ranking.

Let's get to the rankings.

Note: These rankings only represent FOTN awards confirmed by the UFC. 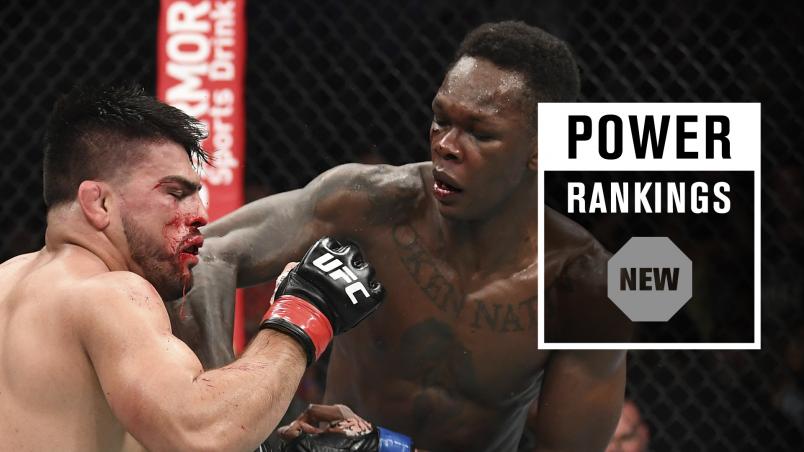 The war between Kelvin Gastelum and Israel Adesanya for the interim 185lb belt at UFC 236 won’t be forgotten anytime soon, as both fighters put on a thrilling show that prompted Dana White to describe the bout as “one of the best fights I’ve ever seen.” And the boss isn't exaggerating.

Both middleweights had their moments in the first four rounds of the fight, with Gastelum dropping “The Last Stylebender” in the first round and Adesanya upping his offensive output in the second and third rounds. In the final minute of the fourth round Gastelum landed a head kick that badly hurt Adesanya, but the New Zealander was able survive and take the fight to the final frame.

With the momentum on Gastelum’s side, he continued executing his gameplan of constant pressure and closing the gap on the lengthy Adesanya. But Adesanya would fire back, stunning Gastelum with a big right that sent him to the canvas. Adesanya pounced, nearly locking up a guillotine and triangle choke before Gastelum made it back to his feet. With a little over a minute left, Adesanya dropped Gastelum for just a moment, and when he got up, Adesanya sent him right back down to the floor with a right hand. Dripping blood and exhausted, Gastelum refused to give in, but Adesanya would not be denied, sending Gastelum to the floor once more before the final horn sounded. What a rise to the top of the fight game for Adesanya and what a display of heart in that fifth round from Gastelum.

Without question this fight deserves to be in the "Top 10" fights of all-time conversation. 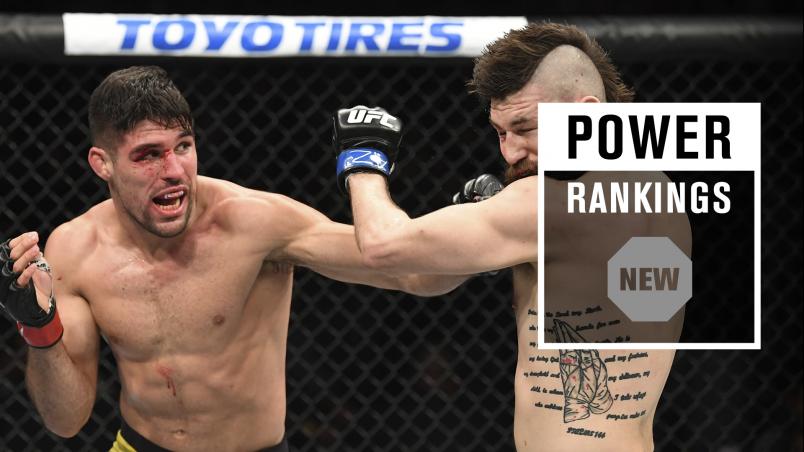 Both Luque and Barberena were battered and bloody heading into the final moments of the third round, with neither fighter giving an inch. In the closing moments of the fight Luque pushed Barberena up against the fence in the clinch and landed two devastating knees to his opponent’s mid-section, dropping the durable Barberena once and for good. The performance from both fighters sent the crowd at Talking Stick Resort Arena into a fever pitch. 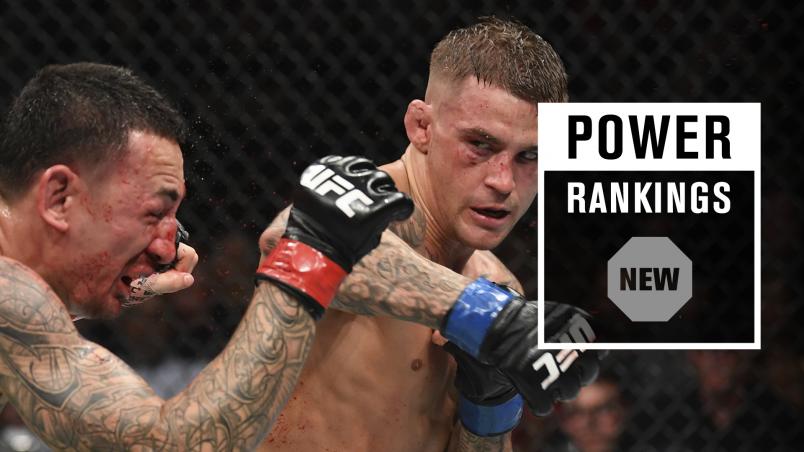 Max Holloway and Dustin Poirier 2 delivered an even better fight than the prequel, as both fighters competed with grit and determination for the entire 25-minute interim title fight. With the crowd erupting with each massive strike and big time combination, fight fans around the world were on the edge of their seats during the whole fight.

The opening round of the fight might have been the most important of the entire fight, as “The Diamond” connected on huge power shots that wobbled and hurt the featherweight champ like we’ve never seen before. But despite getting beat-up badly in round one, Holloway’s unbelievable toughness and durability allowed even up the momentum by hitting Poirier with a barrage of accurate strikes. Rounds two, three, four and five featured impressive surges from both fighters. Holloway and Poirier combined for 359 significant strikes, the second highest tally in UFC history (Holloway vs Brian Ortega combined for 400 last December). In the end, it was the fighter from Louisiana who left Atlanta with the interim lightweight strap. 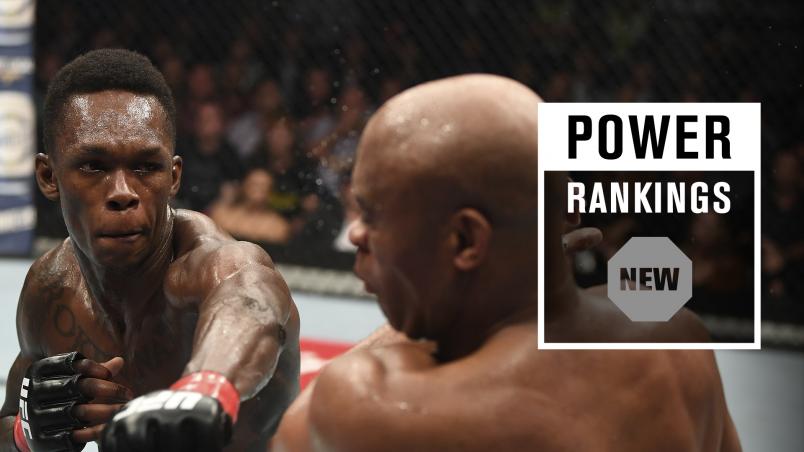 2019’s first Pay Per View featured what might be the greatest display of high-level striking we’ve ever seen. The chess match between the charismatic Israel Adesanya and the legendary Anderson Silva was almost breathtaking, as each fighter displayed their usual level of showmanship and unique striking techniques.

“The Last Stylebender” was able to touch-up, confuse and stun Silva with his creative strikes that became more effective as he adapted to the style of the former champion. Adesanya also showed his fight IQ, not falling for traps set by Silva. By the end of the fight, it was clear that the torch that “The Spider” had been carrying for years had been passed to Adesanya. 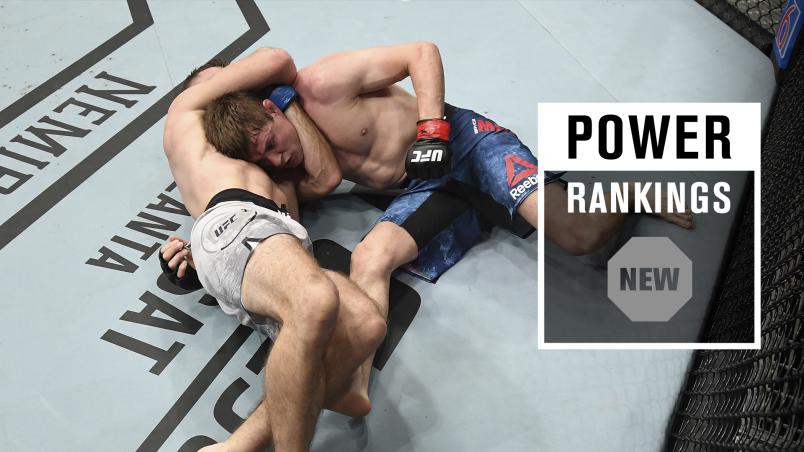 Both Bryce Mitchell and Bobby Moffett earned their way into the UFC by performing on shows (Mitchell on The Ultimate Fighter: Undefeated, Moffett on Dana White Looking For A Fight and Dana White’s Tuesday Night Contender Series) and after they both secured wins in their first official UFC appearances, it was critical that they keep the ball rolling in Nashville.

Their fight ended up being just as crazy as Mitchell’s drill story. In the first round Mitchell dropped Moffett with a perfectly timed punch but Moffett would go on to recover, take Mitchell down and attempt submissions. The next 10-minutes featured crazy scrambles, position changes, submission attempts and near finishes for both “Thug Nasty” and “The Wolfman.” In what might have been a deciding factor in the fight, with just over a minute remaining in the fight Mitchell was able to explode out from under Moffett and take his opponent’s back to end the round in a favorable position. The judges would go on to give Mitchell the victory. 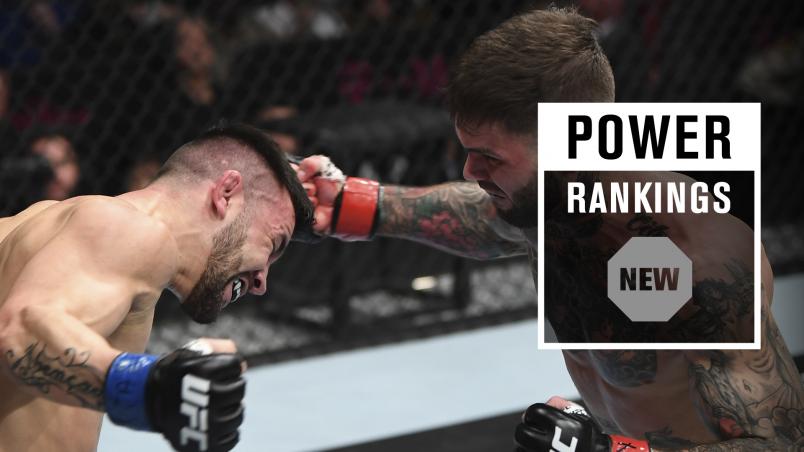 Fight fans were treated to a bantamweight banger at UFC 235, as Cody Garbrandt and Pedro Munhoz sent the T-Mobile Arena in Las Vegas into a frenzy.

After spending the first few minutes of the fight feeling each other out both fighters started finding their range on the feet. Munhoz struck first, stunning Garbrandt with a massive shot and after a mad scramble on the canvas it was Garbrandt’s turn to attack. Like a man possessed Garbrandt charge “The Young Punisher” hitting him with multiple shots directly to the chin. But Munhoz’s chin would prove to be iron as the final 50 seconds of the first round consisted of Garbrandt and Munhoz standing and delivering huge punch after huge punch until “No Love” was knocked out of the fight for good. It was a crazy sequence that ended perfectly for Munhoz. 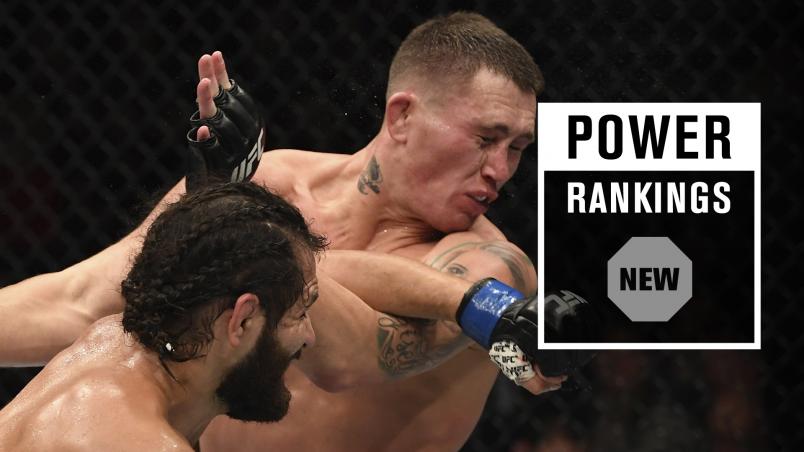 One fight removed from his title shot at UFC 228, Darren Till went to battle against veteran Jorge Masvidal at the O2 Arena in London.

Moments into the fight “The Gorilla” landed a straight punch that sent Masvidal reeling, but “Gamebred” recovered so quick that he was seemingly talking trash to Till before he even hit the floor. Till hit the gas, attempting to finish the fight quickly in front of his home crowd. Masvidal was able to survive and work his way into the second round thanks to his crafty striking and toughness. Then out of nowhere, Masvidal closed the gap with a unique entry point and hit Till with a devastating strike that put Till out before he hit the canvas. The epic finish completely silenced the crowd and earned Masvidal just the type of win he needed after such a long layoff. 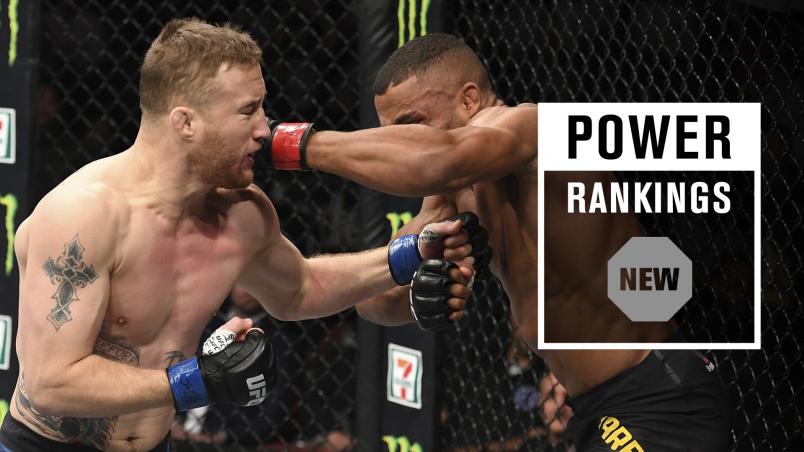 From the moment Justin Gaethje is placed on a card, whatever fight he is a part of is instantly the front runner for FOTN. And when you add the explosive Edson Barboza to the equation it was a main event that was almost too good to be true.

The two lightweights didn’t disappoint, landing their trademark kicks in the fights opening moments. But it was Gaethje who would solidify his spot as a member of the UFC lightweight elite. “The Highlight” was able to hunt Barboza down as he moved around the outside of the cage and connect with a devastating combination that shut Barboza’s lights off. It was an incredible performance from Gaethje, who at this point could probably just change his nickname to “The Fight Of The Night”. 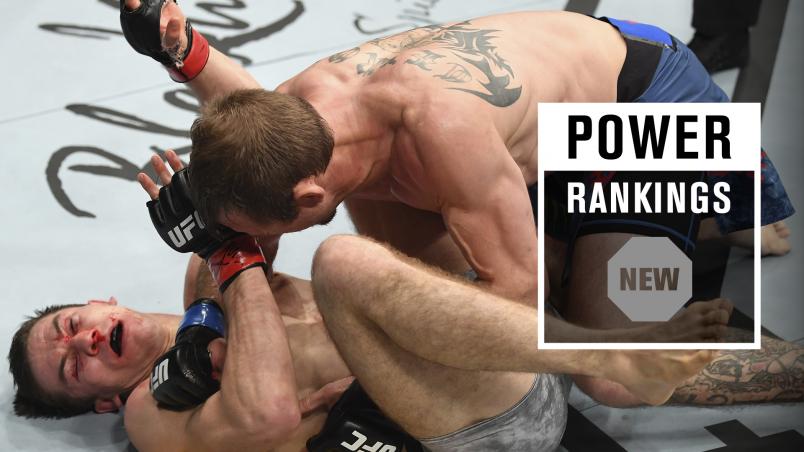 Making the move back down to 155lbs isn’t easy for Donald Cerrone but that’s where he feels that he is the most dangerous. And at UFC Brooklyn he proved just that against the young and upcoming Alexander Hernandez.

In the lead-up to the fight things were heated between “Cowboy” and “The Great”, with both exchanging words with plenty of intention behind them. But once the talking stopped and the fists started flying, it was clear that Cerrone was on a mission to demolish Hernandez. Cerrone had immediate success against the quick Hernandez, landing crushing body shots and mauling the young prospect to the point of a TKO stoppage. And just like that Cerrone was right back in the lightweight picture. 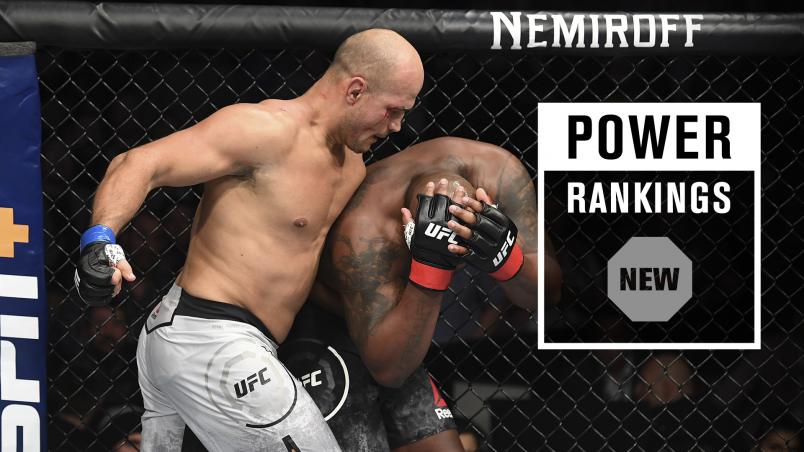 UFC’s first trip to the state of Kansas featured a heavyweight showdown between former champion Junior Dos Santos and title challenger Derrick Lewis. With both fighters capable of knocking each other at any moment, the intensity inside the Intrust Bank Arena in Wichita was palpable.

“The Black Beast” struck first, hitting Dos Santos with a power shot that got the attention of the Brazilian. But the turning point of the fight between these two goliaths was a kick to the body of Lewis, immediately hurting him and forcing him to retreat. “Cigano” charged ready to end the fight only to be forced to dodge a massive uppercut from the hurt Lewis. Heading into the next round it was clear that Lewis was still injured and Dos Santos capitalized by cornering Lewis against the fence and landing power shot after power shot until the referee had no choice but to stop the contest.

Check back next week to see where the FOTN for UFC St. Petersburg lands in the rankings.

Tags
Fight of the Night
UFC 236