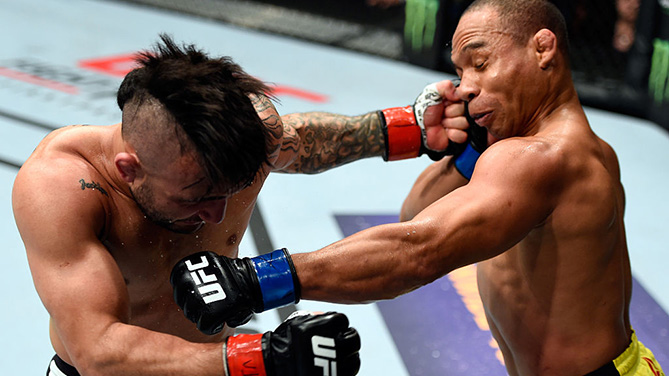 The main event from Portland certainly did not disappoint on Saturday night, as John Lineker eked out a razor close split decision over John Dodson after five hard fought rounds.

Lineker showed off an aggressive game plan as he stalked Dodson around the Octagon for all 25 minutes while throwing more than 300 significant strikes, and he never slowed down once over the course of the fight.

Dodson fired back with some extremely nasty counter shots and even uncorked a pair of head kicks that landed flush, but somehow Lineker managed to walk through both of them.

When it was all over, Lineker's dogged pursuit of Dodson, along with a power punching strategy over five rounds, was enough for the judges to give him the win as he moves to 4-0 at bantamweight in the UFC.

Despite Lineker walking into the night as the No. 3-ranked fighter at 135 pounds, only 28 percent of fantasy players had him winning against Dodson. For the players who did manage to pick Lineker in the main event, 78 percent of them had him winning by knockout.

In other words, the select few who had Lineker winning by decision got a leg up on the fantasy competition when the final scores were tallied.

Lineker wasn't the only Brazilian to pull off an upset on Saturday night, as Alex Oliveira also got a win after walking into his bout with Will Brooks as a massive underdog.

Only 29 percent of players selected Oliveira to win against the highly touted lightweight out of American Top Team, but he managed to get the TKO victory deep into the third round to cap off his first trip to Oregon.

The main and co-main event were both surprising results based on the picks from fantasy players, but as it turns out, every single fight on the main card ended up as an upset when the night was over.

Newcomer Zak Ottow was only selected by 17 percent of players to get a win over Octagon veteran Josh Burkman after he accepted the fight on short notice. Ottow employed a strong striking attack over three rounds to get the victory and added even more points for the additional 45 percent of fantasy players who picked him to win by decision.

The biggest upset all night actually kicked off the main card as Ultimate Fighter season 24 competitor Brandon Moreno submitted No. 9-ranked flyweight Louis Smolka by first round guillotine choke submission. Moreno was selected by just 16 percent of fantasy players after he took the fight on extremely short notice following his stint on the reality show this season.

While the main card was filled with nothing but upsets, the prelims saw quite a few more favorites come away victorious.

Henrique da Silva kept his undefeated record intact with a win over Joachim Christensen with 86 percent of players picking him on Saturday night. Meanwhile, Andre Fili picked up a huge win over No. 12-ranked featherweight Hacran Dias with 58 percent of players selecting him going into the card.

On paper, Fili was actually a solid underdog, but the Team Alpha Male fighter picked up a very impressive win after three hard fought rounds.

Nate Marquardt also came away with an outstanding victory in his fight with Tamdan McCrory following a head kick knockout in the second round. Marquardt was selected by 66 percent of fantasy players, although 48 percent said he would get the job done by decision.

Heavyweight prospect Curtis Blaydes also picked up a win after he was selected by 68 percent of players to get past Cody East on the early prelims.

When the night was over, seven out of 12 fights on the card ended in upsets according to the picks by fantasy players on UFC.com.