All before the main card even started, there was a Knockout of the Year candidate, a come-from-behind KO finish and a 24-second stoppage.
The combat sports world seemed rightfully focused on one of the most marquee boxing matchups in recent memory Saturday night when Gennady Golovkin and Canelo Alvarez fought to a draw back in Las Vegas. But in the Steel City, Fight Night Pittsburgh delivered in a big way.
Eight of the 10 fights ended with a finish and former middleweight champion Luke Rockhold reestablished himself as a force in the weight class ahead of the anticipated Michael Bisping-Georges St-Pierre super fight at Madison Square Garden on Nov. 4.
Mike Perry’s star continues to grow after a knee-to-the-head stopper in the opening minutes in the co-main event. Speaking of rising stars, welterweight Kamaru Usman delivered a first-round KO of his own and put the entire 170-pound division on notice.
These are the Fight Night Pittsburgh Talking Points
Rockhold still elite; warns GSP about move to 185
Heading into this fight it’s almost like people forgot just how good Luke Rockhold has been over the course of his excellent MMA career. He’s beaten the best of the best and handed former champion Chris Weidman – the same New York hero who halted the reign of the legendary Anderson Silva – his first loss as a pro.
David Branch was taking a big step up against Rockhold, who said at Open Workouts he’d be welcoming Branch up from the minor leagues. The former World Series of Fighting champion looked good in the opening round, landing big shots in a flurry of punches as Rockhold was backed up against the fence and forced to adjust.
But it was nothing he hadn’t seen before.
“This is not my first rodeo,” Rockhold said. “I wait and I find my timing. Getting that timing and that range, that’s how we do it at the top of the game. You leave openings when you rush forward like that, hit or miss. He came forward and I didn’t expect it. He forced me to fall back on my right hook and I clipped him a couple times.
As far as what’s next for Rockhold, he’s keeping a close eye on the GSP-Bisping fight scheduled for UFC’s return to New York City. He is determined to get his belt back and he’s issued a warning to St-Pierre about a jump up to the middleweight division.
“GSP is going to get crushed,” Rockhold said. “His game plan will not work against Bisping, as much as I don’t like the other guy – he’s going to lose. … If GSP wins, somehow some way, he ain’t going to f**king fight any of us. I’m trying to inspire him in every way possible to get the f**k out. This is my fight and I will be ready.”

Perry clucks like chicken in one-sided demolition
Mike Perry literally strutted around the Octagon like a chicken after his quick work in the co-main event. It’s hard to blame him for taking in the moment – enjoying his handiwork.
In five Octagon appearances he has four knockout wins and a pair of performance bonuses. Perry’s straight-forward personality and promise of excessive aggression every time he fights has made him one of the most must-see fighters in the UFC.
“I’m the best knockout artist in the division and I want to fight on that Detroit card, I’m ready to fight again,” Perry said. “I want to fight again ASAP. Dana White, Sean Shelby, please I want to get back in there.”

"I know everyone wants to see me fight @Ruthless_RL." @PlatinumPerry calls out the top of the division. #UFCPittsburgh pic.twitter.com/XNwXuX1Af9
— #UFCPittsburgh (@ufc) September 17, 2017

Gillespie continues to collect big checks
Three fights in for Gregor Gillespie and he’s still undefeated and a perfect 3-0 UFC mark has yielded two performance bonuses.
Gillespie’s wrestling prowess allows him to go crazy on the feet, push the pace and throw big bombs. He got clipped with a few head kicks but kept pressing, mixing combos with shots. His wrestling won out as he submitted Jason Gonzalez in the second round, but the young New York native is showing his well-rounded game.
“I think I showed I’m a complete fighter. I was out there doing what I’ve been doing in sparring, my striking coach has been preparing me the right way for the striking,” Gillespie said. “Everyone likes to say the weight class is so deep, but I don’t have to fight everyone in the division at once. I just have to fight the next guy in line.” 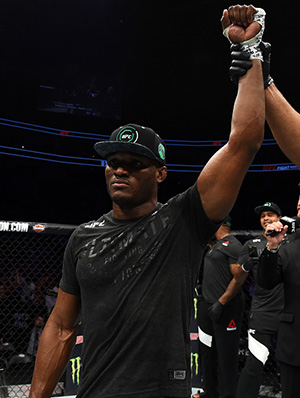 Sergio Moraes</a> of Brasil in their welterweight bout during the <a href='../event/UFC-Silva-vs-Irvin'>UFC Fight Night </a>event inside the PPG Paints Arena on September 16, 2017 in Pittsburgh, Pennsylvania. (Photo by Josh Hedges/Zuffa LLC)" align="right" />Kamaru Usman has a good point when he wonders how his unblemished 6-0 record in the UFC hasn’t yielded a Top 10 ranking. That could change when the new ones come out next week, but Usman showcased just how dangerous he has become against Sergio Moraes.
Known for his wrestling, Usman works with Henri Hooft and company down in Florida and has now evolved into a dangerous fighter in all areas.
“That was the statement win I’ve been looking for. If people around the world are thinking that I’m not the guy to take that belt away from (Tyron) Woodley, they are crazy,” Usman said. “I think RDA (Rafael Dos Anjos) and then I think after RDA is a title eliminator against the winner of Colby Covington and Demian Maia. I want to beat up RDA before the end of the year, early next year fight the title eliminator and then the middle of the year, after Woodley is healthy, I’m taking that belt from him.”
Matt Parrino is a digital producer and writer for UFC.com. Follow him on Twitter at @MattParrinoUFC