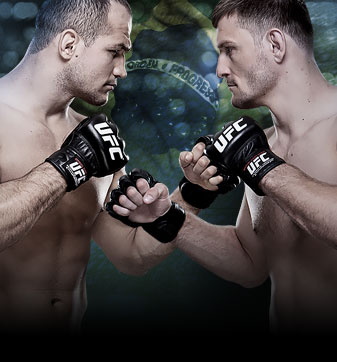 For the first time ever, the UFC will embark on a trip to Phoenix, Arizona, and the promotion is bringing a star-studded card headlined by two of the best heavyweights in the world squaring off in the main event.

Former UFC heavyweight champion Junior Dos Santos returns from more than a year away from the sport to take on Ohio native Stipe Miocic in a headline bout between the No. 2 and No. 4 ranked fighters in the division.

Dos Santos looks to get back into the title hunt, while Miocic hopes to go there for the first time ever with a win on Saturday night.

Also on the card, Rafael dos Anjos looks to build on his last fight, where he took out former UFC lightweight champion Benson Henderson, when he faces perennial bad boy Nate Diaz in the co-main event.

As the weekend draws near, in today's fantasy preview we're going to examine the four fights on the main card to see who has the upper hand going into Saturday night's card from Phoenix.

The main event matchup between Dos Santos and Miocic features two of the best strikers and finishers in the UFC heavyweight division. Dos Santos is at the top of the list with 11 career knockdowns - the most of anyone in the division's history - while also picking up eight career UFC finishes by TKO or knockout. Dos Santos is lethal with his boxing and may have the best hands of anyone in the division. There are still questions about Dos Santos going into the fight, however, because he's been out of action for 14 months and will be returning after suffering the worst defeat of his career, a fifth-round TKO stoppage to current heavyweight champion Cain Velasquez.

Miocic will look to take advantage of any openings Dos Santos gives him, and his best chance of winning this fight will be mixing things up and never staying on the outside for the Brazilian to pick him apart. Miocic will have about a three-inch reach advantage, but he shouldn't be lulled into a false sense of security thinking he can just keep Dos Santos at range with his long strikes. Miocic works best in combinations, where he lands 5.25 significant strikes per minute with 47 percent accuracy. He also mixes in just over two takedowns per 15 minutes, and that's key if he wants to win on Saturday night.

Miocic has to keep Dos Santos guessing and try to beat him up on the inside or the ground, just like UFC heavyweight champion Cain Velasquez did in two separate fights. The issue with that strategy is that Miocic has never fought that way during his UFC career. He's not a clinch fighter and prefers to land hard, heavy shots from the outside. If he gets into those kinds of striking exchanges with Dos Santos, his night could be over in a hurry. Unless Dos Santos is so mentally beaten after those losses to Velasquez that he can't get back to the same level of performance as before, he should have another impressive win on Saturday night.

Rafael dos Anjos will look to take another step closer to a potential lightweight title shot in 2015 as he faces the always dangerous Nate Diaz.

Diaz is returning from more than a year away from fighting due to a contractual dispute, but he's been itching to face a top five-ranked opponent and now he'll get his wish. Unfortunately, as the old adage goes, be careful what you wish for because you just might get it.

Dos Anjos has really come into his own in the last two years, putting together an impressive streak of victories over names like Benson Henderson and Donald “Cowboy” Cerrone while rocketing into the top five of the division. Dos Anjos combined his already potent ground attack, where he's scored 28 career takedowns in the UFC, with a nasty mix of power punches and kicks. He became the first fighter in the UFC to knock Henderson out in his last fight and he's got the power to do the same thing to Diaz.

Diaz is a volume striker, landing 4.13 per minute, and he never slows down from the moment the fight starts until it's over. Diaz presses the action and doesn't understand the meaning of letting his foot off the gas pedal. He might be forced to do so in this fight because his tendency to step forward could land him in a world of trouble against a fighter like dos Anjos.

The Brazilian is great with counter strikes and power punches. He hits hard to the body and if he hurts Diaz, dos Anjos won't let up until the fight is over. Mix in his strong wrestling and jiu-jitsu game and this is a recipe that could see dos Anjos walking out with a win while taking one step closer to that elusive UFC title shot.

Two Dutch big men will face off on the UFC Fight Night on FOX main card as Alistair Overeem tries to rebound from a recent knockout loss to Ben Rothwell while Stefan Struve attempts to get his career back on track after a heart condition, as well as a panic attack prior to his last fight, has kept him out of action for well over a year.

On paper, Overeem should still be one of the top five heavyweights in the world, but he's struggled against some of the top fighters he's faced while suffering knockout losses along the way. Overeem is still ultra dangerous if he's on his game, especially on the inside, and if Struve allows him to put together combinations. Overeem lands nearly four strikes per minute with close to 60 percent accuracy. When he traps his opponents in a phone booth with him, Overeem is like a wrecking machine. His knees might be his best weapon, as he fires them to the midsection like a missile, doing maximum damage along the way.

At 6-foot-11 ½, Struve has the size to keep Overeem away, but as long and lean as the Dutch kickboxer can be, he sometimes struggles to use that reach in his fights. Struve is a gritty striker with knockout power in his hands, but rarely does he keep opponents on the end of his punches and in most cases the fact that he's almost a foot taller than some heavyweights rarely gets mentioned because he just doesn't fight with reach very well. Struve is proficient on the ground and he might even have to fight off a takedown or two because Overeem will mix in some wrestling from time to time.

The biggest factor working against Overeem is the pressure he has to be feeling going into the bout with Struve. After being lined up for a title shot in his second UFC bout, Overeem has gone a paltry 1-3 with all three losses coming by way of knockout. He needs a win in this fight or he might be looking for a new place to call home. Stylistically, Struve's tendency to fight close to opponents, combined with his lengthy time off, should make for a compelling reason to bet on Overeem to walk out victorious.

Perennial heavyweight contender Gabriel Gonzaga wants to get back on a win streak as he faces former Ultimate Fighter competitor Matt Mitrione on Saturday night in Las Vegas. Gonzaga had picked up two wins in a row before losing a close decision to Stipe Miocic back in January. A broken hand forced Gonzaga to the sideline, but now he returns to face Mitrione, who is currently riding a two-fight win streak of his own with both victories coming by first-round knockout.

Mitrione has shown flashes of potential time and time again during his UFC career, but he's always struggled against the top 15 fighters he's faced in the heavyweight division. Gonzaga has a similar problem, but he goes a little higher up the ranks. He's feasted on every fighter he's faced outside the top 10, but his losses have all come against the best of the best in the division.

To win this fight, Mitrione is going to have to stay light on his feet and use good head movement to avoid Gonzaga's power shots. Mitrione packs a serious punch of his own, but he hasn't faced the kind of striker Gonzaga is. Gonzaga may be best recognized as a Brazilian Jiu-Jitsu expert and he certainly has a huge advantage if the fight hits the ground, but he's confident in his hands and feet and has no problem standing with the best fighters in the weight class. He might land a knockdown on the feet before applying his considering grappling skills on the mat.

Mitrione's development into a top 10 fighter hasn't happened yet and it's hard to predict if that maturation process will take place in Phoenix either. Gonzaga is a crafty veteran with a few more tricks up his sleeve and this should end up as another impressive mark on his record as he continues to be the best gatekeeper the heavyweight division has ever known.