When the UFC returns to Phoenix for a special Sunday night show this weekend, a Hall of Famer will come out of retirement as BJ Penn returns to action for the first time in over two years to face rising star Yair Rodriguez in a five-round main event in the featherweight division.

Penn is regarded as one of the greatest fighters of all-time and one of only three UFC athletes to hold titles in two different weight classes. Prior to his retirement, Penn had fallen on tougher times, but now the Hawaiian legend returns to reclaim his legacy.

Penn has no easy test in front of him, as Rodriguez has looked like a future champion thus far in his UFC campaign, but the former Ultimate Fighter winner will face his toughest task to date when he takes on “The Prodigy.”

Also on the card, submission specialists Joe Lauzon and Marcin Held face off in the co-main event while ultra exciting welterweights Ben Saunders and Court McGee throw down in a featured bout at 170 pounds.

In today’s fantasy preview, we'll examine these fights and several more on the card to see who has the upper hand and if there might be an upset brewing at UFC Fight Night: Rodriguez vs. Penn.

Not since Conor McGregor has there been a better or brighter prospect in the featherweight division than Yair Rodriguez. Combining incredible athleticism, flashy moves and solid technique, Rodriguez appears to be the total package, primed to one day make a run at the 145-pound title.

Rodriguez combines a volume striking game, where he lands just under four significant strikes per minute, with a slick ground game. Rodriguez is tough to predict, although he's most dangerous on the feet, where he uncorks any number of unorthodox moves to keep his opponents guessing.

As for Penn, at the top of his game he was one of the best fighters to ever step foot in the Octagon. Penn was one of the first UFC competitors to truly develop a boxing-style lead jab where he would absolutely punish his opponents with the flick of his wrist while virtually stabbing them in the face with a rapid-fire succession of his punches. Of course, Penn also has world-class Brazilian jiu-jitsu, although he rarely seemed to use his ground game much in recent years, instead favoring his striking arsenal for most of his fights. Penn has been spending time under coaches like Greg Jackson and John Crouch, so he's had plenty of top people to advise him on his return to action.

If Penn comes back at full strength, he could still be one of the best fighters in the world.

That said, Rodriguez seems to be a younger, stronger, hungrier fighter right now, and unless he wilts from the spotlight while going up against a bona fide legend, he should get the job done. Rodriguez has the power, speed and versatility to give Penn problems on the feet or on the mat. Penn has also struggled in the past with his conditioning when going into the deepest parts of the championship rounds and that could backfire on him in a five-round fight after two years off.

Prediction: Yair Rodriguez by TKO, Round 4

Many times when two submission specialists meet in the Octagon, the fight ends up as a standup war, but if Joe Lauzon and Marcin Held hit the mat, the exchanges between them could be something truly special.

Lauzon has built his UFC career on being one of the most exciting fighters on the roster, whether he's striking or on the ground. Lauzon has a long history of putting his opponents away by submission, but in recent years his boxing has been the best set up so he can finish the fight on the ground. As for Held, he's not as comfortable on the feet, but don't blink for one second if he drags this fight to the mat because his leg locks are so quick and so devastating that his opposition rarely has a chance to get free before they are tapping out.

The key in this fight is Lauzon's ability to avoid those submission attempts from Held while keeping this fight standing. Lauzon defends just over 62 percent of his opponent's takedowns and Held isn't known for being the strongest wrestler. Where Lauzon has to be careful is not allowing Held to get too close to latch on to his body because he'll gladly pull guard or just flop to the mat where he can apply his dangerous grappling arsenal. As good as he is on the ground, Lauzon can ill afford to get caught slipping because Held is more than capable of tapping him out.

If Lauzon can avoid those takedown attempts, he's shown far superior boxing throughout his UFC career and that experience should lead him to victory on Sunday night.

Two UFC veterans will battle it out in what could be a Fight of the Night candidate, as Ben Saunders meets Court McGee on the main card.

McGee is a volume striker who lands over five significant strikes per minute with just over 37 percent accuracy. McGee isn't known for his power, but he can certainly rack up a lot of shots landed over three rounds if given the opportunity. McGee will also mix in takedowns, as he lands over two per 15 minutes in the Octagon. McGee's constant pressure is typically an asset, but he has to be careful in this fight because Saunders is a very nasty counter striker with deadly knees and elbows in the clinch.

Saunders is a very tall, long welterweight who will enjoy a two-inch reach advantage in this fight. Where Saunders has to be careful is not allowing McGee to engage in the clinch and pressure him against the cage, where this fight could turn into a grind. At distance, Saunders can land with speed and accuracy, but his best weapon could be catching McGee when he comes forward with a flurry. Saunders has a deadly Muay Thai clinch and he only needs to land one knee flush on the chin to put anybody away in the UFC welterweight division. Saunders is also well versed on the mat, so he's not afraid to take chances during exchanges that could result in a takedown from McGee.

While McGee could certainly grind out a decision, it's Saunders' finishing ability that gives him the edge in this fight. Saunders only needs to clip McGee one time on the feet to potentially stop him with strikes or transition to his slick submission arsenal to get the tap out on the mat.

Prediction: Ben Saunders by TKO, Round 3

Tony Martin will look for his second win in a row when he takes on late replacement Alex White. Martin has been an 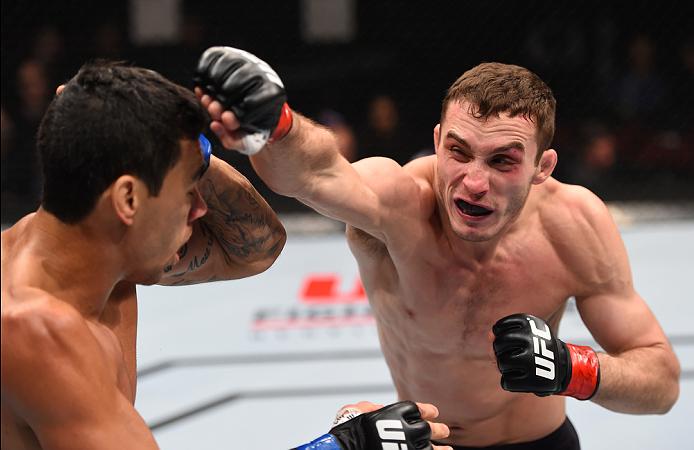 exciting addition to the lightweight division since joining the UFC roster and while he's faced his share of ups and downs, there's no doubt that he still has a ton of potential left in his career. Martin is a very active fighter on the feet and on the ground so he's more than capable of winning this matchup wherever it goes.

Alex White has been an exciting fighter during his stint with the UFC as well, including his unanimous decision win over Artem Lobov in his last fight in the Octagon. White will actually be moving up to lightweight for this fight after competing at 145 pounds in his previous bouts in the UFC and that size disadvantage might come back to haunt him against a long, rangy fighter like Martin.

Martin lands with power on the feet while also mixing in a very versatile ground game that has him sporting a wide range of submissions. Martin will also enjoy a reach advantage over White, so that could allow him to set up his strikes on the feet before potentially dragging this one to the mat to look for a submission finish. White won't go away easy, but it's tough to see any outcome that doesn’t end with Martin getting his hand raised at the end of the night.

Prediction: Tony Martin by submission, Round 2

In the matchup between Frankie Saenz and Augusto Mendes, the fight really comes down to one very key element - whether or not the action hits the ground.

Mendes is a submission specialist with a deep lineage in Brazilian jiu-jitsu and several championships during his career. If this fight hits the mat, Mendes is more than capable of putting Saenz away in a split second with world-class grappling that is virtually unmatched at 135 pounds in the UFC.

That being said, Saenz is a former college wrestler with plenty of grappling in his background as well. Where Saenz will use those skills in this fight is with an anti-grappling game plan that will stop Mendes from taking this to the ground and then punishing him on the feet at a distance. Saenz has to know that Mendes' best shot to win this fight is to drag him to the mat and apply a submission.

On the flipside, Saenz has far superior striking and his wrestling skills are good enough to keep Mendes from ever taking him to the ground. Saenz may have to fend off some interesting submission attempts from Mendes - even while standing - but ultimately he should be able to fend off those attacks and counter with volume striking on the feet to get the win. 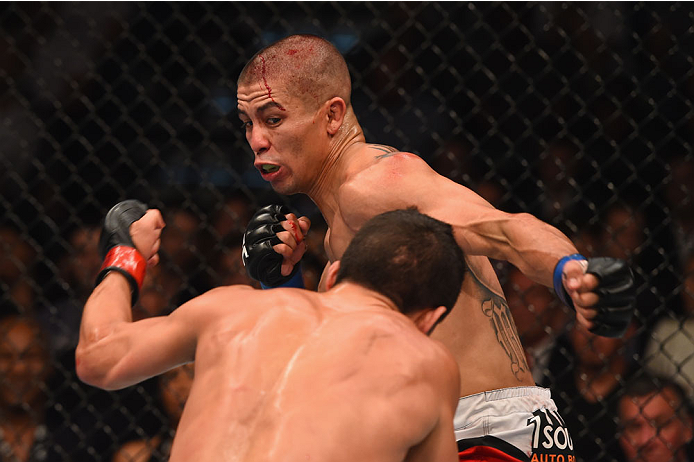 John Moraga accepted this matchup on late notice, but he still has a great chance to pull off the victory and that's why he's a very solid upset pick to get past Sergio Pettis.

Moraga has suffered back-to-back losses in his most recent fights but he remains one of the toughest outs in the entire flyweight division. With a devastating mix of powerful wrestling and strong striking, Moraga is very well rounded and has ways to win whether he decides to stay standing or go to the ground with Pettis.

Pettis has definitely looked better than ever in his last two fights, picking up wins over Chris Kelades and Chris Cariaso, but he's facing a different kind of animal against Moraga. With a college wrestling background, Moraga could vastly alter Pettis' game plan by taking away his kicks with the threat of the takedown. Like his older brother Anthony, Pettis is best when he's controlling the distance and able to out work his opponents on the feet.

Thanks to Moraga's constant threat of the takedown, he should be able to control the pace of this fight and then decide if he wants to try and out box Pettis or just plant him on the mat with a series of takedowns. Moraga just has more ways to win, and as long as he doesn't make any big mistakes by allowing Pettis to strike at distance, he should find his way back into the win column by the time this flyweight matchup is finished.