CUB SWANSON VS. ARTEM LOBOV
Some would put this in the “be careful what you wish for” department when it comes to unranked Artem Lobov’s call out of No. 4-ranked featherweight contender Cub Swanson, but don’t count “The Russian Hammer” out just yet. The SBG Ireland standout has bricks for fists, and as a veteran of the game, he wouldn’t just haphazardly call someone out if he didn’t see some flaws he could exploit in Saturday’s main event. Is Swanson the favorite? Absolutely. But if Lobov can goad “Killer Cub” into a brawl, this fight will get interesting in a hurry.

AL IAQUINTA VS. DIEGO SANCHEZ
He’s been the “Nightmare,” “The Dream,” and now “Lionheart.” But whatever Diego Sanchez wants to call himself, know that nothing ever changes for him on fight night. He is going to be aggressive and in his opponent’s face when the Octagon door closes, and the way Al Iaquinta sees it, that’s the perfect scenario for him when he returns for the first time in a little over two years. If the rust comes off quickly, this one will heat up immediately. But if Sanchez can push Iaquinta into some deep water early, an underdog may become a favorite in a hurry.

OVINCE SAINT PREUX VS. MARCOS ROGERIO DE LIMA
After three consecutive losses, light heavyweight contender Ovince Saint Preux needs a win in a big way on Saturday when he faces heavy-handed Brazilian Marcos Rogerio de Lima. Luckily, OSP is fighting at home in Tennessee, and it’s key to point out that two of those losses came to Jon Jones and Jimi Manuwa and the third was via split decision to Volkan Oezdemir. So don’t write off Saint Preux yet, even though he is going to get his chin tested early and often by de Lima, who is aware that a win over the former title challenger will be a huge boost for his career.

JOHN DODSON VS. EDDIE WINELAND
On a card stacked with Fight of the Night candidates, this matchup between bantamweight vets John Dodson and Eddie Wineland may be the frontrunner. Clearly a clash of speed (Dodson) vs. power (Wineland), this may come down to who can deal with the other’s strengths the best, and while Wineland will never match the speed of “The Magician,” Dodson can crack with the best of them, and that gives him a decided edge on Saturday.
MORE FROM NASHVILLE: Sanchez goes from 'Nightmare' to 'Lionheart' | Iaquinta is all in on his return | Swanson credits reinventing himself | Open workout highlights | Matchup: Sanchez vs Iaquinta

JOE LAUZON VS. STEVIE RAY
If Dodson and Wineland don’t collect bonus checks this weekend, Joe Lauzon may be the cause of it. Already tied with Nate Diaz for most post-fight bonuses in UFC history, Lauzon is always a threat to steal the show on fight night, and in Scottish prospect Stevie Ray, he’s going to have an opponent willing to engage. Plus, Ray can make a name for himself stateside with a win over an established foe like Lauzon, giving him even more motivation to bring the fight to the New Englander.

JAKE ELLENBERGER VS. MIKE PERRY
The hits keep on coming in “Music City” with a welterweight grudge match between power hitters Jake Ellenberger and Mike Perry. These guys have made no secret of their dislike of one another, and getting the opportunity to punch each other in the face probably makes it Christmas in April for “The Juggernaut” and “Platinum” Mike. The easiest breakdown is to say whoever lands first wins, but if Ellenberger decides to use his wrestling, it’s a whole new fight. 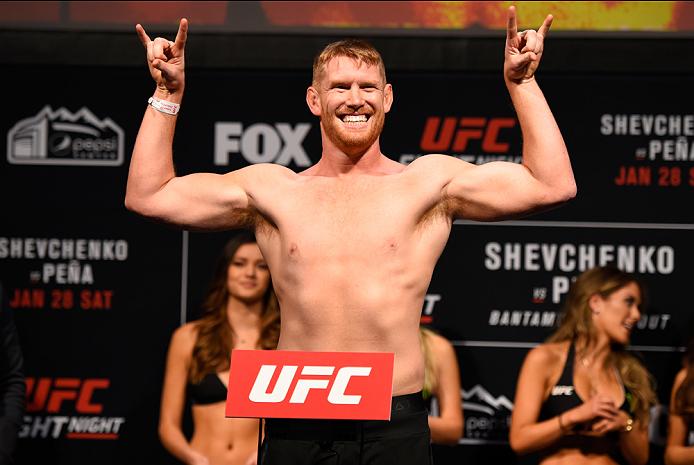 challenger Leites has hit some rough road as of late, losing three of his last four, but when those losses are decisions to Michael Bisping, Gegard Mousasi and Krzysztof Jotko, it takes a little bit of the sting off such a string. Suffice to say that the Brazilian is still one of the best 185-pounders in the world, but Alvey, who has won four straight, is hungry to get into that conversation, and with a win on Saturday, it would be impossible to ignore him.

DUSTIN ORTIZ VS. BRANDON MORENO
Brandon Moreno has impressed in two UFC bouts thus far, but the Mexican phenom is taking a big step up against Tennessee veteran Dustin Ortiz. It’s a testament to Moreno’s willingness to test himself against the best, and if he wins, it’s going to skyrocket him up the rankings. But Ortiz has proven himself to be pretty dangerous in matchups like this, and this fight will be no exception.

SCOTT HOLTZMAN VS. MICHAEL MCBRIDE
Unbeaten in Tennessee, Knoxville’s Scott Holtzman returns to Nashville, the site of his first UFC win, to face fellow lightweight prospect Michael McBride. Holtzman, while only 2-2 in the Octagon thus far, looks like he’s got all the tools. All that’s missing for “Hot Sauce” is a little seasoning, and he hopes to get in some good rounds with dangerous submission artist McBride, who will be seeking his first UFC victory.

JESSICA PENNE VS. DANIELLE TAYLOR
Strawweight contender Jessica Penne is a lot better than her 1-2 UFC record would indicate, and Saturday night is her chance to prove it against Danielle Taylor. Taylor is a scrapper who finds a way to win, but she will be giving up five inches in height to Penne, and whether the fight stays standing or hits the mat, that’s a lot of size to give up. But again, “Dynamite” does seem to always find a way to make it a fight that she can win.

ALEXIS DAVIS VS. CINDY DANDOIS
Given the track record of both Alexis Davis and Cindy Dandois, it’s no surprise that these ladies have been elevated to the UFC FIGHT PASS Featured Bout slot on Saturday night. Davis is an underrated treasure at 135 pounds, battle-tested against the best in the game for years. And even though Dandois is making her UFC debut, she’s no newbie to the sport, and she’s got the wins over Invicta FC champion Megan Anderson and former Strikeforce champ Marloes Coenen (in her first pro bout, no less) to prove it.

BRYAN BARBERENA VS. JOE PROCTOR
Joe Proctor makes his welterweight debut against all-action Bryan Barberena in what should be an entertaining scrap. Proctor is fighting in a new weight class after a long layoff, so that’s the main storyline here, but it will be interesting to see how perennial underdog Barberena responds to being the favorite here.

HECTOR SANDOVAL VS. MATT SCHNELL
Flyweights Hector Sandoval and Matt Schnell should get the night off to a rousing start, with Sandoval looking to build off the momentum of his first UFC win and Schnell trying to notch that elusive Octagon victory for the first time. Two names to keep an eye on, for sure.