MARK HUNT VS. ALEKSEI OLEINIK
In a classic matchup pitting striker against grappler, Mark Hunt will travel into enemy territory to take on submission specialist Aleksei Oleinik at the first ever UFC card in Russia. Hunt has built his reputation on being one of the most ferocious knockout artists the heavyweight division has ever known, but he also possesses arguably the greatest chin in the history of the sport. Hunt has the ability to put anybody's lights out with just one shot and he's definitely not afraid to take a couple punches if that gives him the opportunity to return fire. Meanwhile, Oleinik has been one of the most prolific ground specialists since first arriving in the UFC. The Russian battler has pulled off two extremely rare Ezekiel choke finishes inside the Octagon. Plus, Oleinik has worked tirelessly to improve his striking over recent years to help set up his ground attacks. Still, this fight really might come down to Hunt's ability to keep the action on the feet while Oleinik's best chance for victory will be finding away to drag the “Super Samoan” to the ground. One more factor to consider is the incredible finishing rate between these two fighters, which means the judges can probably take the night off once Hunt and Oleinik clash in the cage.

JAN BLACHOWICZ VS. NIKITA KRYLOV
Polish light heavyweight Jan Blachowicz has been on the best run of his career lately with three wins in a row, including a unanimous decision over British slugger Jimi Manuwa in his most recent performance. The win streak has put Blachowicz inside the top five rankings at 205 pounds, but to protect his spot, he'll have to go up against a blistering finisher in Nikita Krylov this weekend. Krylov returns to the UFC after a brief exit at the end of 2016 and he's coming back off four straight wins, all by knockout or submission. Krylov boasts a ridiculous 100-percent finishing rate, so don't blink once he steps into that Octagon to do battle with Blachowicz on Saturday.

ANDREI ARLOVSKI VS. SHAMIL ABRURAKHIMOV
Former heavyweight champion Andrei Arlovski will look to get back on track following an absolute war in his most recent fight against highly-touted Australian heavyweight Tai Tuivasa. Arlovski had won his two previous fights before that setback and now he'll get the chance to fight close to his native Belarus for the first time since 2013. As for Abdurakhimov, he's been knocking on the door of the top 10 since for quite some time while going 3-1 in his past four fights. Abdurakhimov is a very durable heavyweight so he won't go away from the first minute until he last as he looks to add a former UFC champion to his resume while fighting at home in Russia. 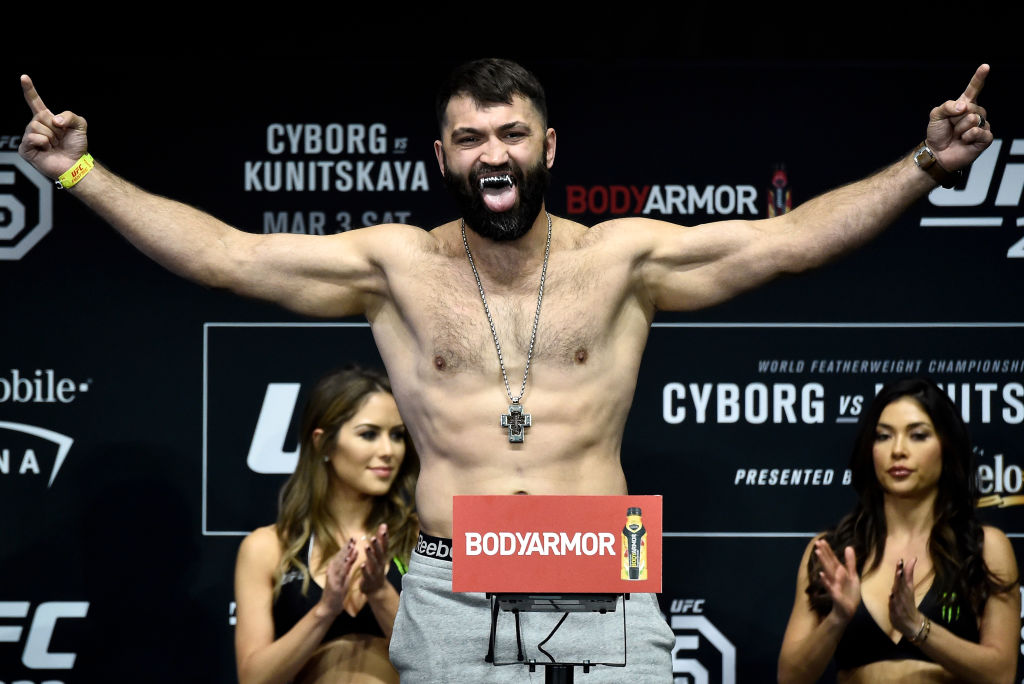 ALEKSEI KUNCHENKO VS. THIAGO ALVES
Undefeated Russian wrecking machine Aleksei Kunchenko will make his UFC debut when he faces veteran welterweight Thiago Alves in Moscow. The book on Kunchenko is that he's a nasty finisher with 13 knockouts on his resume and obviously he'll have the favor of the crowd on his side. He's getting no easy test in his first appearance, however, as Alves has consistently been one of the best welterweights on the roster for years. Alves has fought the best of the best at 170 pounds, including a title fight against Georges St-Pierre at UFC 100. Now Alves will step into the lion's den while looking to hand Kunchenko his first career defeat.

CB DOLLOWAY VS. KHALID MURTAZALIEV
Former Ultimate Fighter competitor CB Dollaway had a change of opponents recently, as he will now be taking on late notice replacement Khalid Murtazaliev. Dollaway's body of work is well known, with a long list of fights in the UFC, including back-to-back wins in his most recent fights. As for Murtazaliev, he comes into the fight off two wins in a row while going 5-1 over his past six performances. Murtazaliev also has a ton of power to display, with knockouts in four of his most recent victories.

PETR YAN VS. JIN SOO SON
Russian bantamweight Petr Yan has been called one of the best young prospects in the entire sport and he proved that in his UFC debut when he dismantled Teruto Ishihara in the first round. Yan will now face South Korean fighter Jin Soo Son, who took this fight on short notice. Son is 9-2 as a professional, including four wins in a row and a TKO victory in his most recent performance back in April. Son will look to pull off the upset while Yan will attempt to show once again why there's so much hype surrounding his arrival in the UFC.

RUSTAM KHABILOV VS. KAJAN JOHNSON
With five wins in a row, Rustam Khabilov is once again making noise in the UFC's lightweight division, where he's amassed an impressive 8-2 record inside the Octagon. Khabilov is a monster in the clinch and with his wrestling, where he's well known for tossing his opponents around like rag dolls. Johnson will certainly give him everything he can handle, as the Canadian lightweight has gone 4-1 in his past five fights, including a stunning knockout over Adriano Martins back in 2017.

MAIRBEK TAISUMOV VS. DESMOND GREEN
Mairbek Taisumov is yet another ferocious lightweight looking to climb into the top 15 rankings while building on his past five wins in a row. Taisumov is a devastating finisher with all of his recent wins coming by knockout, so don't expect him to look for a decision in this matchup against Desmond Green on Saturday in Russia. Green will obviously come into the fight as the underdog, but that certainly won't scare him away. Green has picked up two impressive wins in the UFC, including a victory over veteran lightweight Gleison Tibau in his most recent performance.

MAGOMED ANKALAEV VS. MARCIN PRACHNIO
Russian light heavyweight Magomed Ankalaev will look to get his first UFC victory when he returns to action against Polish fighter Marcin Prachnio this weekend. Prior to a loss in his Octagon debut, Ankalaev had won all nine of his previous fights, with several of those coming by way of knockout. Prachnio is also looking to get back on track after falling to veteran knockout artist Sam Alvey in his most recent outing. Prachnio is another punishing finisher, so he'll throw everything in his arsenal at Ankalaev when they meet in the center of the Octagon.

ADAM YANDIEV VS. JORDAN JOHNSON
Somebody's “0” has got to go when undefeated light heavyweights Adam Yandiev and Jordan Johnson meet in Moscow. Yandiev has earned nine career victories while finishing all of his opponents, with six submissions and three knockouts on his record. He'll have his hands full with Johnson as he boasts an identical 9-0 record that includes three straight wins to start his UFC career.

RAMAZAN EMEEV VS. STEFAN SEKULIC
Highly touted middleweight fighter Ramazan Emeev will look to move to 3-0 in the UFC when he faces newcomer Stefan Sekulic. Emeev has been dominant since first arriving in the UFC, including back-to-back wins over Sam Alvey and Alberto Mina. As for Sekulic, he's gone 8-1 over his past nine fights while earning finishes in six of those victories.

MERAB DVALISHVILI VS. TERRION WARE
Merab Dvalishvili has dealt with a pair of heartbreaking losses since joining the UFC roster, but he'll look to get back in the win column when he faces Terrion Ware on Saturday to kick off the card. Dvalishvili trains under coaches Matt Serra and Ray Longo so he definitely has a good team behind him to get ready for this fight. Ware will certainly give him everything he can handle as he looks to earn his first UFC win after a trio of losses has put his back against the wall going into this matchup.