Fight Night Monterrey: By The Numbers

Take a closer look at UFC Fight Night: Magny vs. Gastelum in this edition of By The Numbers. 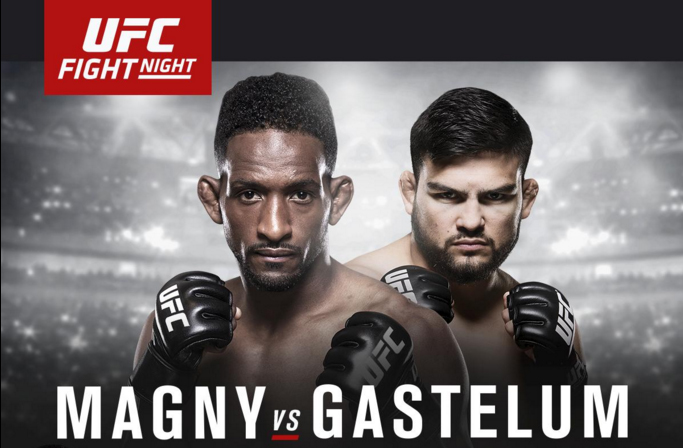 13
Current ranking of Neil Magny as a UFC welterweight

9
UFC wins by Magny, tied with Donald Cerrone for most UFC wins since 2013

7
Fight win streak by Magny inside the Octagon from February 2014 to August 2015, one of 26 fighters in UFC history to win at least seven consecutive UFC fights

5
Of those wins by Magny occurred in 2014, tied with Roger Huerta’s 2007 for most UFC wins in a calendar year

27
Takedowns by Magny, tied for 5th most among active UFC welterweights

15
Current ranking of Kelvin Gastelum as a UFC welterweight

278
Significant strikes landed by Gastelum in the UFC

93
Percentage of Gastelum’s sig. strikes were standing, UFC average is 76.7

4
Current ranking of Ricardo Lamas as a UFC featherweight

4
Finishes by Lamas inside the Octagon (2 KO/TKOs, 2 sub)

100
Percentage of Lamas’ UFC finishes were on the ground

16
Takedowns by Lamas in UFC/WEC competition

14
UFC wins by Diego Sanchez, tied with Rashad Evans for 2nd most UFC wins by a former The Ultimate Fighter winner behind Michael Bisping’s 17

4:37:57
Total time Sanchez has spent fighting inside the Octagon, 5th most in UFC history and most by any fighter who has not held a belt

15
Times that Sanchez has fought to a decision across his 21 fights inside the Octagon, most in UFC history

6
Fight of the Night bonuses for Sanchez, tied for 2nd most in UFC history behind Frankie Edgar’s 7

2
KO/TKO victories for Sanchez via flying knee, only fighter in UFC history to do so

2176
Significant strikes attempted by Sanchez in his UFC career