The main event battle between the No. 2 and No. 3-ranked lightweights paid off in a big way on Saturday night as Tony Ferguson defeated former champion Rafael Dos Anjos in an epic five round war.

While Ferguson was the underdog heading into the night according to the oddsmakers as well as fantasy players, with only 42 percent picking him to win, the former Ultimate Fighter winner showed up in a big way with a relentless pace and a damaging offense that had Dos Anjos busted up and bleeding throughout the 25-minute fight.

Ferguson dished out 199 significant strikes and his aggression was unstoppable, especially as the fight pushed into the championship rounds. Dos Anjos certainly didn't have a bad performance, but it was clear after five rounds that he took the brunt of the damage as he dropped his second fight in a row after losing the title to Eddie Alvarez back in July.

Ferguson has now won nine fights in a row - a record for the UFC lightweight division - as he takes one step closer towards becoming a title contender at 155 pounds.

Despite being an underdog on the betting lines, fantasy players had a lot of faith in Diego Sanchez as he took on 24-year old newcomer Marcin Held on Saturday night and it paid off big. A whopping 71 percent of players picked Sanchez, who was a 2-to-1 underdog according to some sportsbooks, but that didn't matter after he applied a powerful wrestling game that grounded Held throughout the three round fight.

Out of the 71 percent who picked Sanchez to win, another 58 percent correctly selected him to get the victory by decision as well.

Ricardo Lamas pulled off a minor upset in a featured featherweight bout on the card as he submitted Charles Oliveira with a second round guillotine choke. Lamas was selected by 46 percent of players compared to 54 percent going with Oliveira, but he made the most of his opportunity to get a win after just accepting the fight three weeks ago.

In The Ultimate Fighter Latin America finals, Martin Bravo put on a stellar show as he battered Claudio Puelles before earning a TKO victory with a vicious body shot that earned him a contract with the UFC and his first finish inside the Octagon. 73 percent of players selected Bravo to get the job done and the young Mexican fighter came through with flying colors after a dominant performance on Saturday night.

Two more favorites got wins on the main card, including Beneil Dariush, who defeated Rashid Magomedov after three rounds. Dariush was picked to win by 61 percent of players, with another 60 percent saying he would win by decision, which was ultimately the correct call. Meanwhile, top rated prospect Alexa Grasso, who was a heavy favorite with 74 percent of players picking her to win, defeated former Ultimate Fighter competitor Heather Jo Clark. 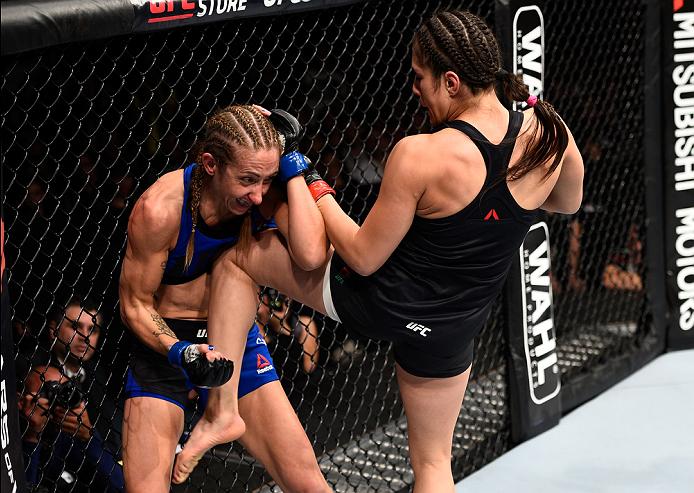 Grasso was one of the biggest favorites going into the card, but Clark did a good job surviving until the final bell. Fantasy players astutely recognized Clark's toughness with 65 percent saying Grasso would get the win by decision.

On the prelims, Erik Perez kept the string of wins going for the favorites after 75 percent of players had him beating Felipe Arantes in their bantamweight showdown. Meanwhile, Joe Soto also enjoyed favorite status with 59 percent picking him to defeat Marco Beltran. Soto's win also earned fantasy players an extra 50 points because he took the bout on extremely short notice.

The favorite streak stayed alive in the early prelims on UFC FIGHT PASS as well, with Sam Alvey earning a unanimous decision over Alex Nicholson. Alvey was actually the biggest favorite all night, with 86 percent picking him to defeat Nicholson in their middleweight bout.

As it turns out, according to the selections made by fantasy players, only two upsets occurred on the entire card, with favorites winning the majority of the fights on Saturday night in Mexico City.