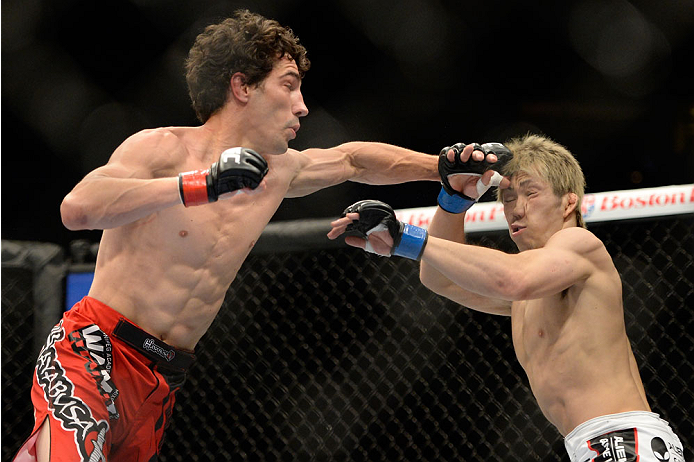 When the UFC lands in China this Saturday, the undercard will be filled with a ton of local talent, including Ultimate Fighter China runner up Wang Sai, as he looks to get his first win inside the Octagon against British submission specialist Danny Mitchell.

Also on the preliminary portion of the show, a pair of highly-touted prospects will debut, as Alberto Mina takes on Shinsho Anzai, while Japanese newcomer Yuta Sasaki takes on Canadian fighter Roland Delorme.

When there's a slew of rookies and relative novices when it comes to Octagon experience all competing on one card, it not only makes picks nearly impossible to make, but these fights really do make the difference between winning or losing in the UFC Fantasy Pick Em game.  So in today's preview, we'll look at a few of the key fights from the undercard to pass along some knowledge about the fighters as well as some picks that could help lead you to victory on Saturday.

Most of the fighters who competed on TUF China were relatively inexperienced when it came to the level of competition they would soon face in the UFC.  Wang Sai was no exception to that rule, although he progressed at a fast rate and continues to do so training under the tutelage of former Ultimate Fighter season one competitor Mike Swick.

Swick has opened an affiliate school in Thailand based around his home camp at American Kickboxing Academy and Wang is one of his prized pupils.  Wang is a combination of power and technique, especially on the feet, which is the place he excels most during his fights.  Wang lands about two strikes per minute, which isn't the best average in the world, but he's got the kind of strength to make every punch and kick landed hurt his opponents.  He's a good finisher who can smell blood in the water and go for the kill when the opening presents itself.

His opponent, Danny Mitchell, is a submission fighter with long range, standing 6'2" while fighting at 170 pounds for most of his career. Mitchell isn't going to blow anybody away with his striking, where he mostly likes to keep opponents on the end of his punches and kicks because he will likely be the taller fighter in most of his bouts.  Mitchell's real strength lies in his ground and clinch game where he likes to look for submissions early and often.  He's also faced a slew of top fighters during his day, including Gunnar Nelson, Niko Musoke, and former TUF 19 fighter Cathal Pendred.

As long as Mitchell isn't drained from the time difference and travel to China, he should be able to dispatch of Wang without too much trouble unless he tries to get cute and turn this into a striking battle. If this fight stays standing, all bets are off because then it's just a matter of which one lands first.  Wang has more power than Mitchell, but the British fighter has more range and reach.  On the ground or at worst in the clinch, Mitchell has a game better suited to winning this fight.  Knowing his opponent's tendencies to look for the knockout, Mitchell has to know his best way to win is to get this fight to the mat as quickly as possible.  If he does that, Mitchell might just pull off a first-round finish.  If not, he may go to war for three rounds and then it's anybody's guess who wins.

Injuries robbed this fight from being a potential barnburner when former TUF Nations fighter Sheldon Westcott was slotted to face newcomer Alberto Mina, but instead, with the Canadian off the card due to injury, the UFC signed Shinsho Anzai for this matchup.

Anzai may be new to the UFC and taking this fight on short notice, but he's well known throughout Asia as a serious knockout threat with his hands and feet. Anzai has no problem opening up a flurry on an opponent from anywhere and he's got the kind of power to hurt the best of the best in the division.  Anzai is definitely still raw with some of his striking, getting wild at moments when he allows himself to slip away from the fundamentals.  The debuting Anzai also has a tremendous wrestling game in his back pocket, which is really where his foundation comes from in the fight game.  He's also fought for much of his career as a middleweight, but this fight is at 170 pounds, so if he's cut the extra pounds effectively it could give him a power advantage as well come fight night.

He'll need that strength to deal with Alberto Mina's flawless attacks with his Brazilian Jiu-Jitsu and judo. Mina is a highly-touted prospect who has been talked about in MMA circles for quite some time now as a fighter to watch over the next few years.  Mina's grappling is absolutely top-notch and he incorporates that very well with a Judo background that gives him a solid foundation for throws and takedowns.

Mina should have the advantage on the ground, especially if he lands on top. Where he has to be careful is if Anzai controls the pace of this fight and never allows him to drag it to the mat.  As a wrestler, Anzai should be able to dictate where he puts this fight, but if Mina gets a hold of him in the clinch and starts moving his hips to either side, the Japanese fighter could be going for a ride.

Mina is still developing his overall MMA game, but his effective use of jiu-jitsu and judo should make him a fun fighter to watch over the next 12 months.  He should win this fight against Anzai with superior mat control and technical standup.  He may not get a chance to truly impress the powers that be given the fact that Anzai is going to be a tough matchup for him stylistically, but he should still get the win by decision.

Yuta Sasaki might be the next big Japanese superstar to come to the UFC, and though he's still very young, he already has 20 fights to his name.  Sasaki originally stated that he was going to sit out for probably another year and gain more experience, but when the UFC comes calling, it's awfully hard to turn down an offer.

Sasaki, at 5'10", is a tall, lanky fighter for bantamweight with a nasty submission arsenal and a good striking game as well.  Sasaki loves to get the finish and he has the ability to put a fight away from anywhere.  He's slick with his transitions on the mat as well as fast on his feet with good range and long reach.  Now he won't have as much reach as he will normally get fighting at 135 pounds in the UFC because Roland Delorme also stands 5'9" tall.

Sasaki comes out fast and hard and doesn't slow down until the fight is over.  He's finished seven out of his last 11 opponents inside the first or second round, and he's done it by submission and knockout, showing he can pull off the victory from anywhere.

Delorme is going to be a good measuring stick to see where Sasaki stands during his UFC debut. The former Ultimate Fighter competitor comes to the bout with a mix of Brazilian Jiu-Jitsu and judo.  While he's normally the taller fighter in his bouts, Delorme prefers to get on the inside with his opponents and work for takedowns and then submissions from there.

This fight comes down to control and distance - if Sasaki handles both of those areas he'll make a successful debut.  Sasaki has also worked during certain stretches with the camp at Team Alpha Male in California, so he's well-versed in what it feels like to go with the best of the best in the world at featherweight and bantamweight.  Sasaki is a potential star on the rise and the world should be watching when he competes on Saturday in China. Delorme is tough enough to stick around for all 15 minutes, but the result stays the same, with Sasaki coming out as the victor.

Another rookie to watch on Saturday is Russian Milana Dudieva, who makes her UFC debut after being forced to sit out from her originally scheduled bout back in June due to injury.

Dudieva will come into this fight with some of the best power at 135 pounds in the UFC women's bantamweight division. She's got a wicked right hand that comes looping in from over the top, and if it lands, it's lights out and party over.  Dudieva also favors her right leg when throwing kicks so it does make it a little easier to guess which direction she's going, but until someone stops it or avoids it, she'll keep going to the well over and over again.

Phillips comes out of a good camp from Washington that also produced Ultimate Fighter winners Julianna Pena and Michael Chiesa, so there's no doubt she's scrappy and tough in every part of the fight.  Phillips lost her debut fight in the UFC when she just couldn't keep up with her opponent Valerie Letourneau.  Phillips is definitely a brawler by trade and that's the exact recipe for disaster facing a power puncher like Dudieva in this fight.

Dudieva has the kind of pop behind her punches to come after Phillips multiple times in the fight and all it takes is one right hand slipping through and the fight is over.  Even if it doesn't land, Phillips is going to be forced to circle away from the right enough that it could potentially throw her off her game and allow Dudieva to set the pace and take the center of the Octagon, which always sways the judges.  Still, the judges may get the night off if Dudieva can dive in with one of her right hands and put Phillips to sleep.  It's not going to happen quickly, so this is a bout that could go deep into the third round before it happens, but Dudieva definitely has the skills to get it done, whether it's during the first minute or the last.