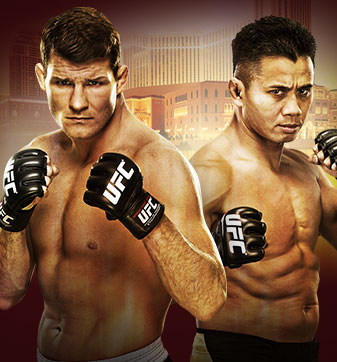 The UFC returns to Macao, China this weekend with a top-heavy main card as well as some former Ultimate Fighter China participants looking to make an impact on a growing roster of international competitors.

At the top of the show is former TUF China 'administrator' Cung Le, who returns from a lengthy layoff due to injury to face off with the man many fans love to hate, Michael Bisping.  The two middleweights are both known for strong stand-up games, so this should be a striker's delight when they throw down in the headline bout from China.

Also on the card is Korean star Dong Hyun Kim, who has found a career rejuvenation of sorts after being pegged as a wrestler and grappler for most of his time in the UFC. Lately he's been knocking opponents out left and right, the most recent being highlight reel finishes of Erick Silva and John Hathaway.  His opponent, Tyron Woodley, will be searching for redemption after an ugly showing in his last bout against Rory MacDonald as he looks to re-establish himself as a top five welterweight contender.

In today's fantasy preview, we're going to examine the four fights on the main card to see who has the advantage come fight night and which of these bouts may end before the final horn gets the chance to sound.

Michael Bisping will look to erase the bad memory of his last fight, where he lost a decision to Tim Kennedy in a largely forgettable performance by both men.  Bisping has always been the picture of consistency inside the Octagon up to the point where he lost to Kennedy, and he'll hope to find his footing again with this fight against Cung Le in China.

Bisping's best weapons are always his fists, because he lands early and often in his fights.  He has landed the greatest number of significant strikes in middleweight history, and also puts together some serious volume as he lands 4.4 significant strikes per minute as well.  He's also nearly impossible to hit, with over 70 percent striking defense.

If there's one person who has the kind of striking arsenal to uncork that one punch or one kick to put Bisping away, it's former Strikeforce champion Cung Le.  As a traditional martial artist coming from San Shou, Le is a nasty striker with a barrage of kicks at his disposal coming from every angle during a fight.  As he showed in his last trip to the Octagon, he's also got some serious power in his hands, folding former middleweight champion Rich Franklin like an accordion and finishing the fight by knockout. Le is tied with Anderson Silva for the most knockouts in middleweight history when combining statistics from the UFC and Strikeforce, and he's also got tremendous accuracy, hitting his opponents over 52 percent of the time he throws something.

On paper, Bisping remains the favorite and should walk out of this fight the winner.  The way he puts combinations together in volume and then moves out of harm's way should keep him from Le's powerful punches or kicks.  Where Bisping can't make a mistake is allowing Le to find his rhythm because he can't match the former Strikeforce champion when it comes to strength in his strikes, and going toe-to-toe will likely end badly for him if that's the strategy he has on fight night.

Expect Bisping to fight at a controlled pace with solid footwork and a lot of boxing.  If he can keep Le at a distance and avoid damage, he'll coast out of China with a unanimous decision win.  If there's a finish in this one, however, watch out for Le, as he can unleash a head kick from anywhere and he hits like a sledgehammer when he lands.  All it takes is one to slip through and Bisping will wake up with visions of Dan Henderson dancing in his head.

The odds can't get any closer than they are in the welterweight co-main event with Dong Hyun Kim taking on Tyron Woodley.

Lately, Kim has turned himself into one of the most exciting fighters in the welterweight division with a mix of basic striking and some highlight reel finishes from out of nowhere.  While statistically Kim still reeks of a grappler – he has the fourth largest ground control percentage in UFC history - his recent fights tell a much different story.  Kim's striking has started to come together in a way it’s never done before, with 51.1 percent striking accuracy while finding some real power in his hands.  He knocked Erick Silva out cold two fights ago and did the same with an elbow strike to John Hathaway that may go down as one of the best knockouts of the year.

Woodley has plenty of counters to Kim's offense; however, it's just a matter of whether or not he'll employ them. During Woodley's career with Strikeforce he was a prolific wrestler and clinch fighter with over 40 percent of his strikes landing from that position while taking down opponents at will.  He also stuffed anybody attempting to take him down with a ridiculous 95 percent success rate defensively. Woodley has turned into more of a power puncher since coming to the UFC after putting away both Jay Hieron and Josh Koscheck with strikes.

Woodley started to employ his wrestling a bit more in his win over Carlos Condit, but he failed to put any kind of attack together in his last fight against Rory MacDonald in June.  Did nerves get to Woodley with a potential title shot on the line or did he just run into a horrible matchup against a top three welterweight like MacDonald?

The only way to know for sure is if Woodley comes out of the gate in China and imposes his will on Kim from start to finish.  If Woodley is the aggressor, pressing the action and looking for the clinch early, then this is his fight to win.  If he's tentative and doesn't engage, Kim could see this as an opening to target Woodley's head and body for a striking attack.

The odds aren't wrong because this is an impossibly tough fight to pick, but based on recent performances, the edge goes ever so slightly to Kim based on his wins and confidence of late, along with a short travel time from Korea to China for this fight.  Woodley didn't get much time off after losing to MacDonald, and when you couple that with a day-long flight to get to his next bout and the mental questions that still surround him, he's just not an easy bet to take at this stage of the game.

The first ever winner of TUF China returns for his next fight in the Octagon, as Zhang Lipeng looks to carry over his success on the reality show when he takes on another Ultimate Fighter veteran in Brendan O'Reilly, who travels from Australia to give him a challenge in his home country.

This fight really is the classic striker vs. grappler mold based on the type of performances these two men gave during their time on The Ultimate Fighter.  Zhang is a wrestling-heavy fighter who averages over four takedowns per 15 minutes in the cage.  While his accuracy is less than 50 percent, it's the tenacity of his attacks that give him the edge, as Zhang rarely gives up, even if the first attempt fails.

O'Reilly, on the other hand, is a heavy puncher who loves a good knockout.  He's not bad on the ground either, but his experience is pushed more towards a striking-based attack.  Facing a fighter like Zhang, it's likely O'Reilly is working on his takedown defense and looking to keep this fight standing. With a boxing background that reaches back to his teenage years, O'Reilly definitely likes throwing his hands and overwhelming opponents when he gets them hurt.

Still, Zhang has shown tremendous growth since his time on TUF China and he was a welterweight with some solid strength who is now moving down to 155 pounds. If the weight cut went well, Zhang should exhibit some power as he presses forward and looks to put O'Reilly on the mat.  If he does that enough times, the Australian's frustration level will go through the roof and it will affect every other part of his strategy as he starts to worry about the takedown.

Zhang should escape with a unanimous decision win here as he slowly eases into a shark pit known as the UFC lightweight division.

The featherweight final from TUF China will finally go down this weekend after an injury forced the two fighters to forgo their spot on the UFC's last card in Macau.

Ning was a very impressive specimen during his time on the reality show, putting together two knockouts in two fights, although he classifies himself as a wrestler when it comes to his style.  Ning also idolizes former PRIDE champion Wanderlei Silva and works tirelessly on his Muay Thai attacks, so that should give you some idea of the kind of fighter he likes to be inside the cage.

As for Jianping Yang, he's a more well-rounded fighter with a more complete submission arsenal in his toolbox than his opponent.  Yang has shown some creative striking in his past as well and he trains out of the same camp as TUF China champion Zhang Lipeng.  Yang mixes things together very well and he has to know that Ning will come into this fight trying to take his head off, which can many times lead to some really effective counters.

Yang just has to be careful of not getting caught in a firefight with Ning, because that is like juggling dynamite and one of them will get blown to smithereens.  As long as Yang can stay controlled and composed, he should be able to outstrike Ning with a more precise kickboxing attack and then work the fight to the ground, where he can start fishing for submissions.  He may not get the finish, but he'll try early and often and that should be enough to get Yang the win and the TUF China crown he's been waiting to wear for months.