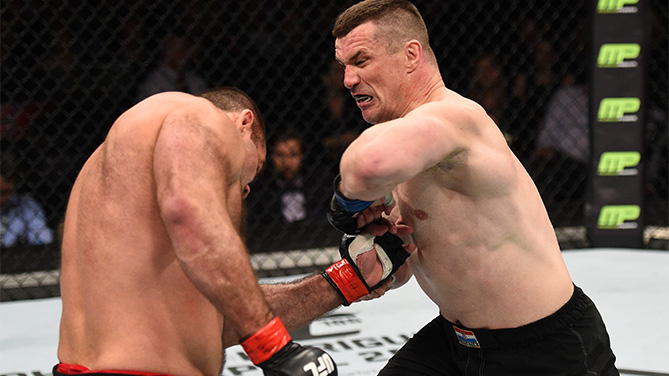 What’s better than breakfast with the UFC? How about breakfast and lunch?

Saturday’s Fight Night from Krakow, Poland, allowed UFC Fight Pass viewers – at least those on the west coast – to pour a cup of coffee and watch the early prelims from the comfort of their beds. And then maybe stick around for lunch and the main card.

It was well worth it.

The much-anticipated rematch between heavyweights Gabriel Gonzaga and legendary Mirko Cro Cop leads off our Talking Points on the day after. 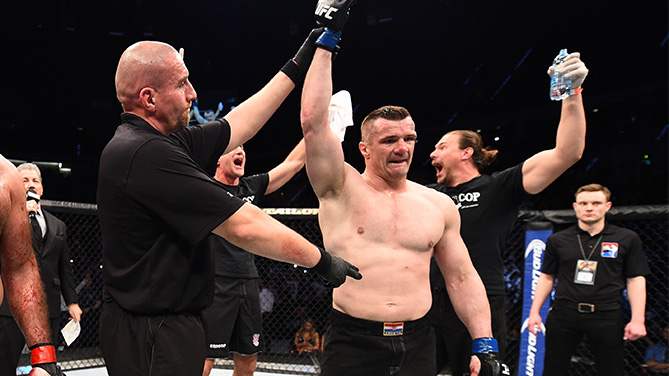 1. Eight years. That’s how long Cro Cop waited for a rematch with Gonzaga, who scored a stunning knockout of the Croatian in 2007 with an electrifying head kick – the same maneuver Cro Cop used so often during his storied career.

Cro Cop wanted a second chance, and he finally got it. But he had little success for most of the first two rounds of their scheduled five-rounder and even suffered a deep gash on the corner of his left eye.

Then, suddenly, he proved that 40 is the new 30 – a triumph for middle-aged men everywhere. In the third round, Cro Cop dropped Gonzaga to the canvas with two left elbows and pummeled him with more head strikes before the fight was stopped at the 3:30 mark.

It was a perfect execution of his team’s strategy, Cro Cop said: Wear out Gonzaga for two rounds, then go for the finish.

The win, selected fight of the night, ended a three-fight UFC losing streak for Cro Cop and avenged his earlier loss to Gonzaga. It clearly put his career back on track, assuming he continues to fight, but it also validated an MMA career that encompasses 44 fights (31-11-2 record).

“This was must-win situation for me, not because of my future status in UFC but because of my whole career,” he said at the post-fight press conference. “I just knew I’ve got to beat him.” 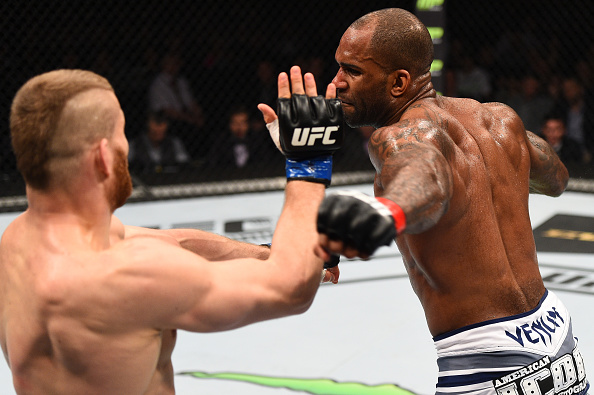 2. Ninth-ranked light-heavyweight Jimi “Poster Boy” Manuwa won a unanimous decision over Jan Blachowicz in the co-main event, but he apparently needed to overcome more than just a tough opponent.

Afterward, Manuwa revealed that he fought despite a torn meniscus, ACL and MCL, perhaps one reason he went the distance for the first time in his 16-fight career.

The win was important for Manuwa (15-1) since it came after he suffered the first loss of his MMA career, a TKO at the hands of Alexander Gustafsson in March 2014. He said he still intends to fight twice more this year, preferably against top-10 opponents, but not until he’s fully recovered.

“I almost didn’t make it to the fight,” he said. “I only got cleared last week to fight. I got advised not to fight, but I didn’t want to pull out and ruin the card.” 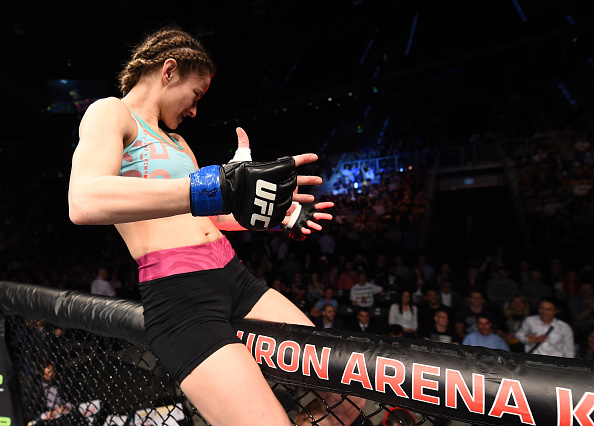 After upsetting No. 6-ranked Joanne Calderwood with a first-round armbar, Moroz did her best McGregor imitation – leaping to the top of the Octagon fence and calling out UFC champion Joanna Jedrzejczyk of Poland, who was sitting ringside.

Moroz, who was making her UFC debut but is 6-0 overall, pointed at the strawweight champ and jestered that the belt belonged around her waist.

Asked later if she felt it was too early to challenge Jedrzejczyk, Moroz said through a translator, “Why too early? I consider myself to be ready to fight for the title, and I think I showed in this fight that I’m ready to even win.”

4. The card was loaded with tough Polish fighters, but it took a while before one of them earned a victory. In fact, they started out 0-4 before middleweight Bartosz Fabinski of Warsaw won a unanimous decision over Garreth McLellan.

Welterweight Pawel Pawlak then pounded out a unanimous decision over Sheldon Westcott, but even American-born Seth Baczynski, known as the “Polish Pistola,” lost. He lasted a mere eight seconds before being KO’d by Leon “Rocky” Edwards.