Who were the winners at UFC Fight Night Arlovski vs Barnett? Click below to get the results for all the fights at Barclaycard Arena in Hamburg, Germany on Saturday, September 3, 2016. 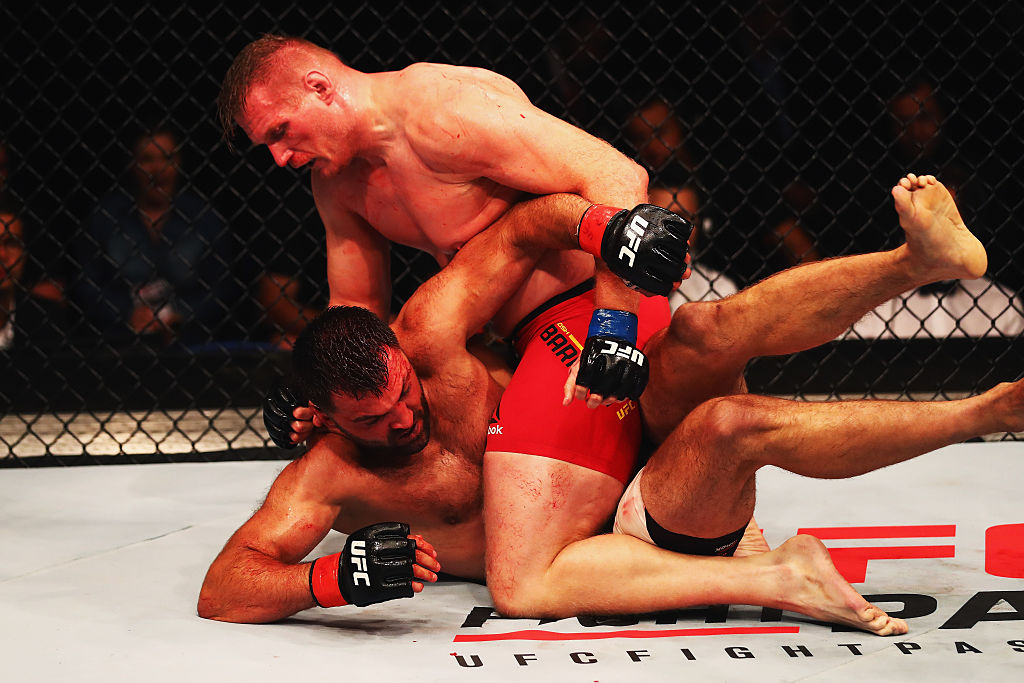 Barnett wins by rear naked choke submission in the third round! 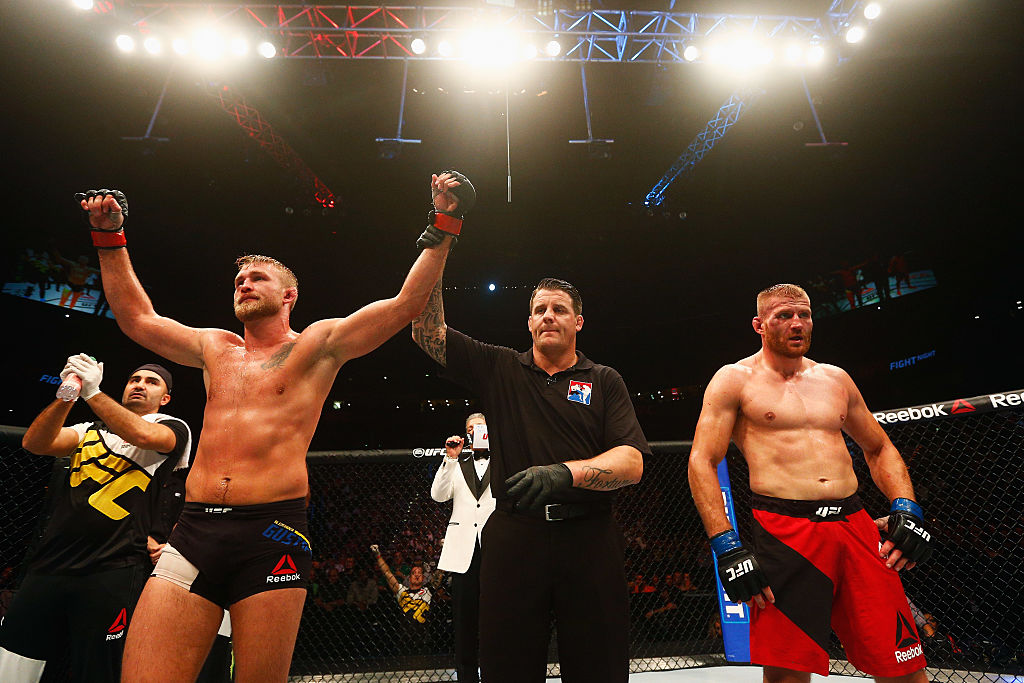 No finish, but there was no doubt that Gustafsson dominated this fight from beginning to end. The No. 2-ranked light heavyweight had 4 takedowns in the bout and doubled his opponent’s striking total (142-71), leading to a definitive unanimous decision on the judges’ scorecards (30-27, 30-27, 30-27)

They said it:
Alexander Gustafsson: “It felt wonderful. It’s so good to be back in the Octagon and to start winning again. I came in with an open mind, I knew that he wanted to finish me early and he came in hard. I didn’t connect my punches really in the beginning though. Jan Blachowicz is a very tough opponent. He has been in the game for a very, very long time and I knew I had to be on top form for this fight. And here I am now with the win. I’m glad I got to fight him because now everything is clear; I am the best guy in Europe."
Jan Blachowicz: “I feel sad because I lost the fight but in another way I feel great because I can fight against Alex Gustafsson who is one of the very best in the world. I didn’t expect him to take me down, that really surprised me. I thought that I would be the one that would try to take him down. That was my mistake in my training; I focused on stand up too much. But he was better, that is it.” 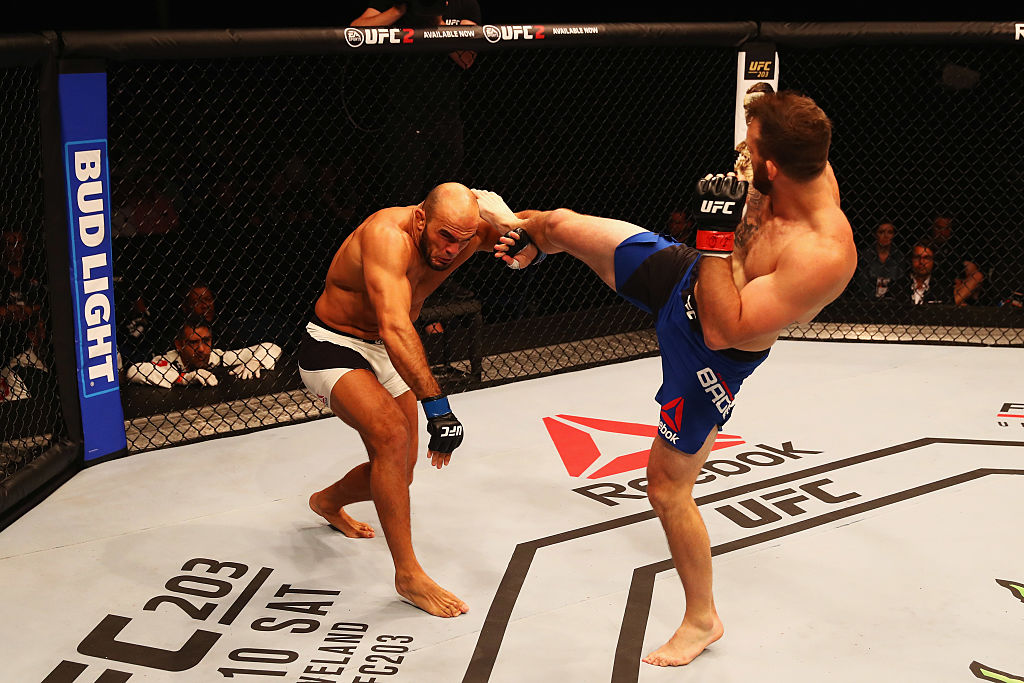 WHAT A KNOCKOUT! Latifi was strong in the bout, but he got caught by a Bader knee in the second round and dropped to the mat immediately. Bader walked off, secure in knowing he had a KO victory.

They said it:
WINNING FIGHTER: “This was something new, you know, I haven’t had a kick or a knee knockout. You kind of know when it hits a sweet spot and you see him go back and he’s done. It was just a great feeling. All the accumulation of hard work comes together at that one moment. I like to enjoy my fights afterwards and relax and let my mind just kind of relax too, so we’ll wait and see what happens next. I’ve fought everybody in the division – a who’s who throughout my career – so at this point who cares who’s next." 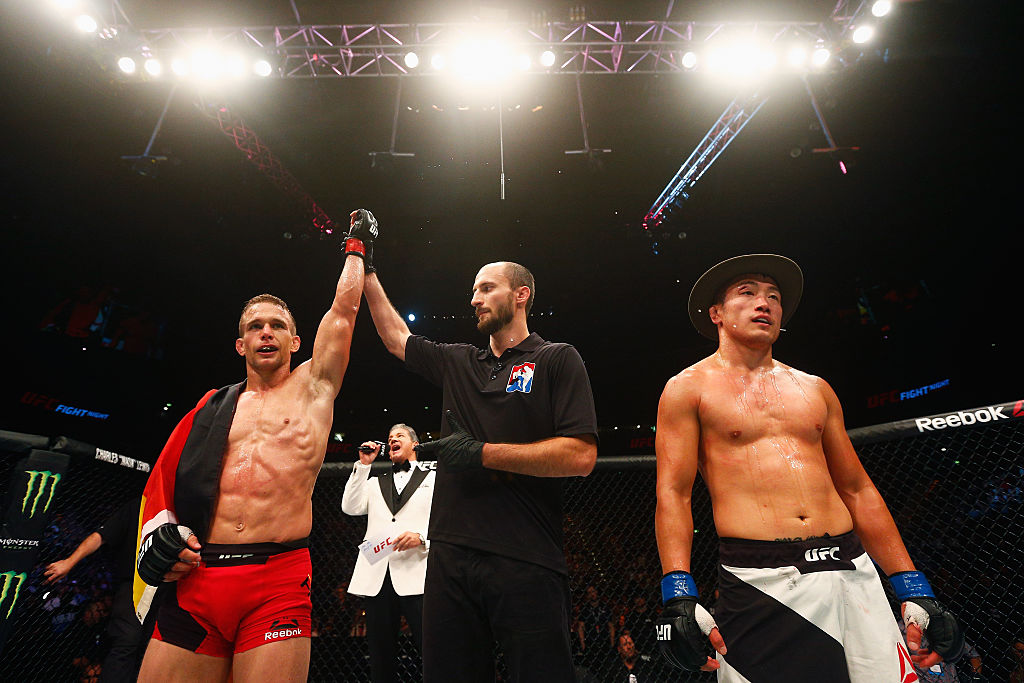 They said it:
Nick Hein: “I’m feeling good. I’m just happy. You know there were a lot of expectations for me going into the fight. With Antoni Hardonk, he took me by the hand and told me that we can do everything better than you did before. I have to bow in front of this man. He’s basically the man that I am going to move to Los Angeles for. I’m travelling around the world because of him! It makes me happy to walk out there in front of home fans. Of course, people always want you to win and to knock somebody out – to do some sort of flying kick or to see fireworks – but I have to get used to the fact that that’s not always going to happen."
Tae Hyun Bang: “I have a lot of regrets about how the fight played out. I felt like I should have been on the attacking end a little bit more. I was a little bit too tentative, especially in the first two rounds. I should have gone in on attack mode, and I’ll be working on that for the next camp.” 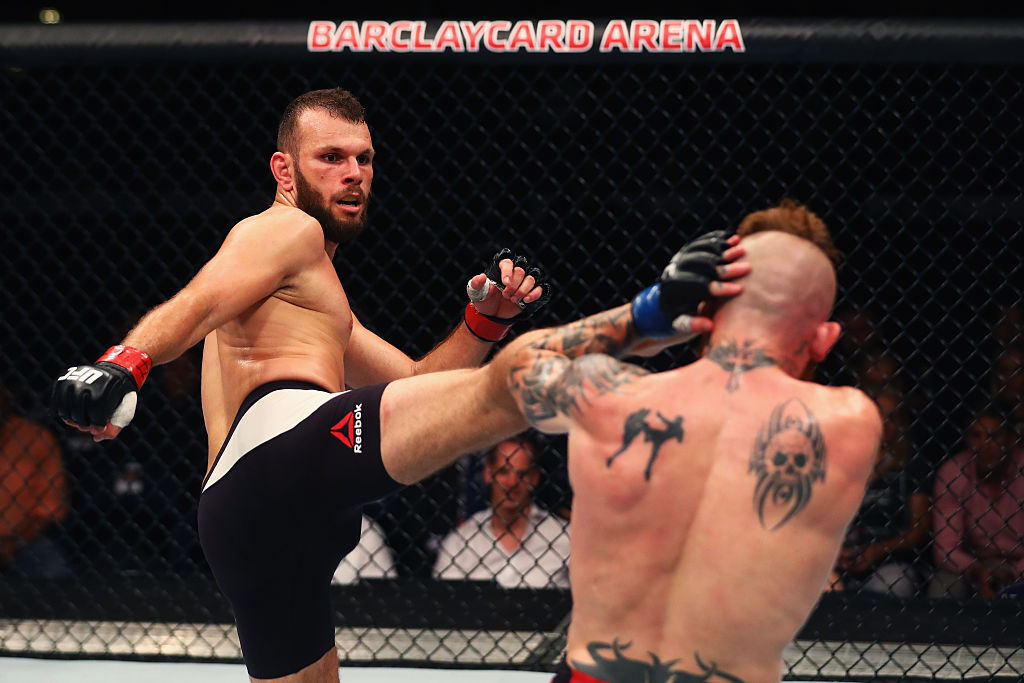 The two UFC newcomers put on a show, with a frantic finish as both traded blows trying to get a finish in the waning seconds. But the fight went the distance and the judges ruled in favor of Ayari (30-27, 29-28, 28-29)

They said it:
Jessin Ayari: “I’m feeling good - my first victory in the UFC. It was not an easy fight. Jimmy Wallhead is such an experienced guy. He has twice as many fights as I have had. My debut though – I’m very happy. I’ve thought about this for so long, but now it’s reality and I feel so free. UFC is like home now. Now I will take a little break and then next week, I’ll be back at training and I will be waiting for the next fight."
Jim Wallhead: “I need to watch the fight back. I’m not happy with my performance. I just couldn’t get close to him the whole fight. Very good game to him, fair play. I messed up. I feel like I’ve let a lot of people down." 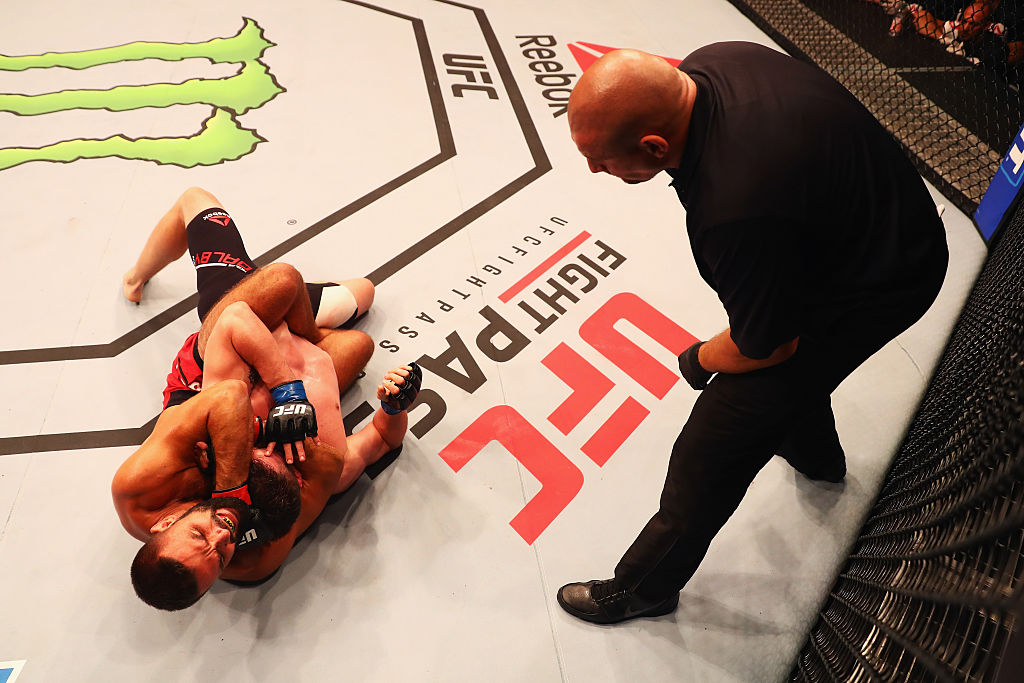 Sobotta came out strong from the start, taking Dalby down and pounding him in the first round before dominating throughout the fight. It went the distance, but Dalby couldn’t keep it close – losing by unanimous decision (30-26, 30-26, 30-26)

They said it:
Peter Sobotta: "I'm a big grappler but I see that striking is more important in the UFC so I got a new coach and I've been working on my striking hard. He was tough but when I'm fighting at home in Germany, I'm going to win!"
Nicolas Dalby: “The first thing of significance which happened was that he caught me with a very stinging jab, and that kind of left me with double vision and so after that I had trouble judging distance. But still, he did a good job. He got me down and stayed somewhat active on the bottom and he won the fight fair and square. I wish I would have given a better show but I hope that it got noticed that I didn’t quit and I didn’t just lay down but I kept on fighting. Hopefully I’ll get the chance to showcase my skills in another fight in the UFC but we’ll see." 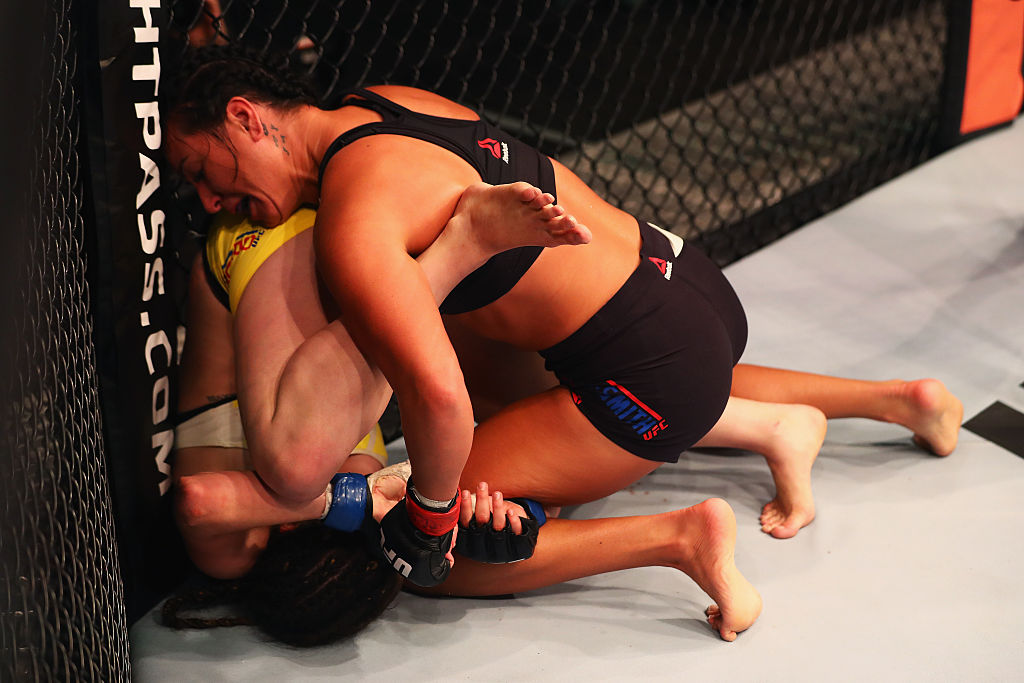 UFC debutant Macedo was eager, but Evans-Smith’s experience came through as she worked her opponent throughout the fight and earned a third-round TKO win.

They said it:
Ashlee Evans-Smith: "I feel happy. I was surprised by her movement. She knew I was going to come forward and she angled well. I felt like in the second and third I found my range. She's young but she's good. I'm not surprised that she was undefeated. I wanted a first round finish but I guess I can't be greedy."
Veronica Macedo: “I feel like I could have won that fight, I just feel like I made a few technical mistakes that I need to fix, which shouldn’t be a problem. I felt a bit bad because of course I didn’t have a full camp so I didn’t have much cardio and she was able to use my lack of energy to her favour. But I do believe that I’m a better fighter and I will show it soon enough when I come back. Next time, with a full camp, I finish her in the first round.” 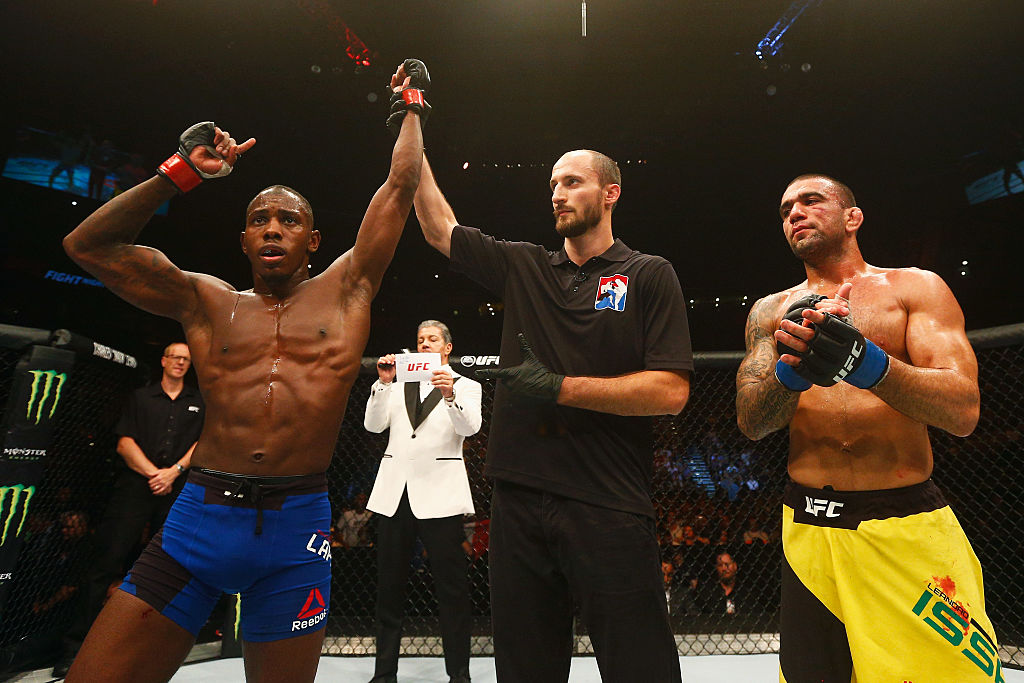 They said it:
Taylor Lapilus: “I think I did a good fight. He was stronger than I thought. But thank you to him for giving me the opportunity to have this fight. Thank you to all my team, my sparring partners in the gym and my coaches and to my corners. Thank you for giving me this opportunity to fight. You will see me again soon, and I hope that next time I will do better than this time."
Leandro Issa: “In the first round my plan was to take him down but he defended very well. He did a good job defending and landing his strikes.” 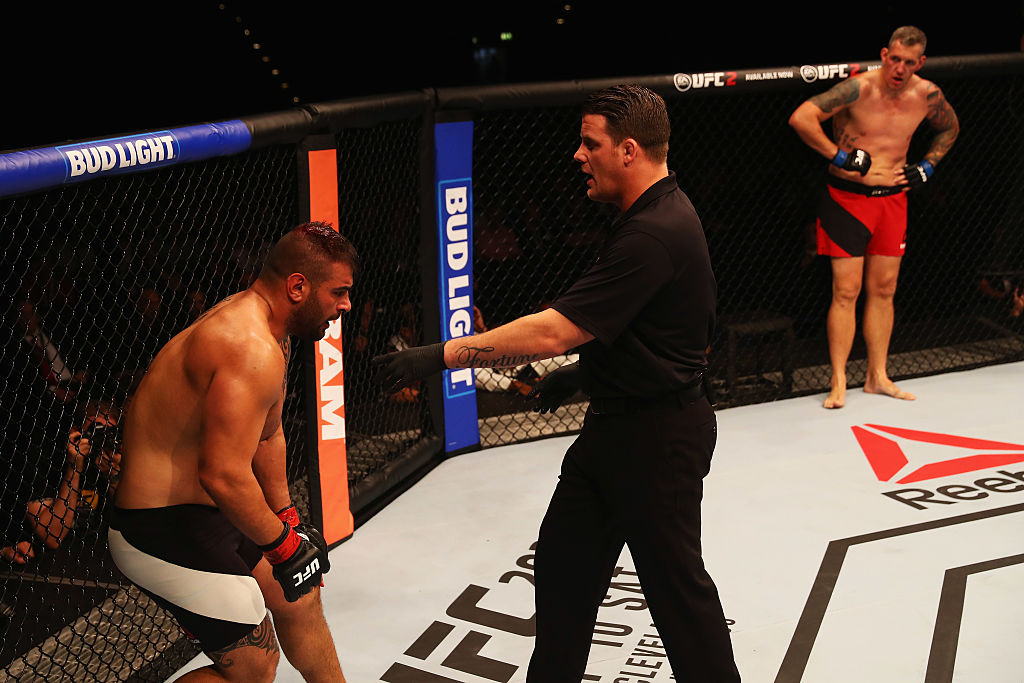 A point deduction in the first round was the difference in this fight as Colombo was docked when he hit Danho with a knee while he was in an illegal position (Danho’s hand was on the ground). The fight went the distance and it was ruled a majority draw. (29-27, 28-28, 28-28)

They said it:
Jarjis Danho: "The knee made a huge difference. Germany is my home and I was happy to fight in front of such a great crowd. I trained very hard for this fight but for some reason couldn't keep my energy up. He was a tough guy. I will go back to training and come back better."
Christian Colombo: “He was a little stronger than I thought, and he didn’t want to wrestle as much as I thought he would. He was a bit quicker than I thought too, and those big swings he threw - a couple of them landed but they didn’t really hurt me. I knew he was going to try to grab the floor when I kneed him so it’s a bit disappointing that he got the hand down. One of the judges gave me the fight 29-27. Even though I got deducted a point, it’s still a draw. I just think it’s kind of wrong. But don’t leave it to the judges, right." 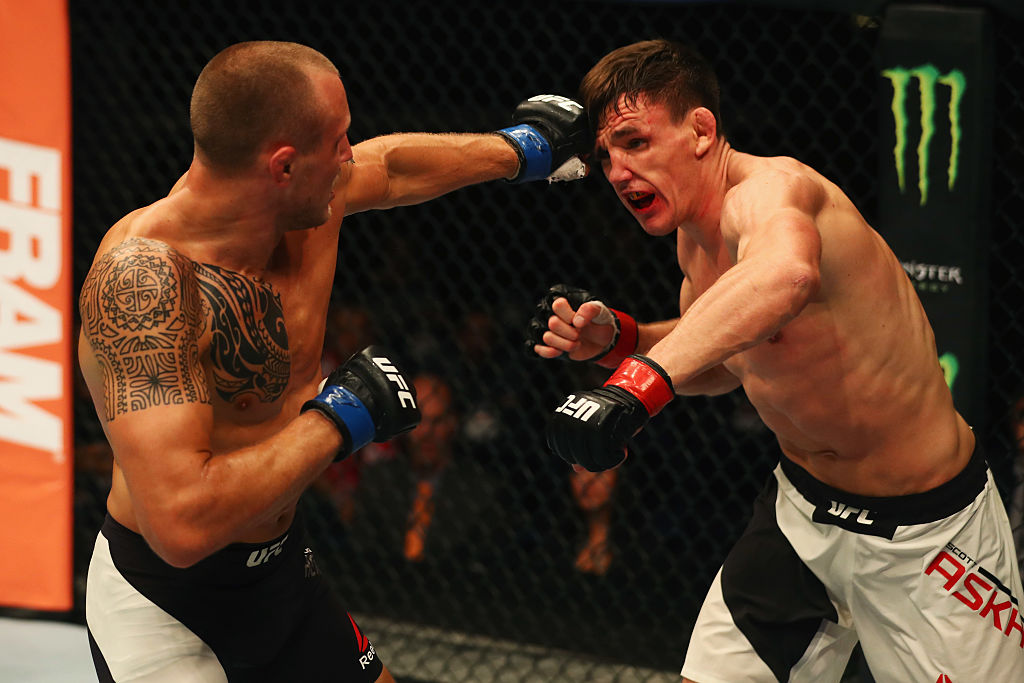 Cagey start to the fight, but both unleashed as the minutes ticked. However, neither was able to finish the job, leaving the result in the hands of the judges who ruled in favor of Hermansson by unanimous decision (30-27, 30-27, 29-28). The UFC debutant from Sweden held the edge in overall strikes by 50 (116-66), with the majority of the advantage coming after the first five minutes of the contest.

They said it:
Jack Hermansson: "I'm not very happy with my performance. I had a plan to keep a high pace but I didn't manage to do it. I'm in good shape but I couldn't get my body to respond and keep that pace. I was at his pace and that was why it was such a tough fight.”
Scott Askham: “Obviously I’m disappointed. I feel like I’m really struggling to get momentum in the UFC at the moment. It hurts. I feel like this was my time to get on that winning streak, start pushing forward and show that I’m ready. I still feel like I can make waves in the UFC, it’s just that I’m really struggling to get that momentum." 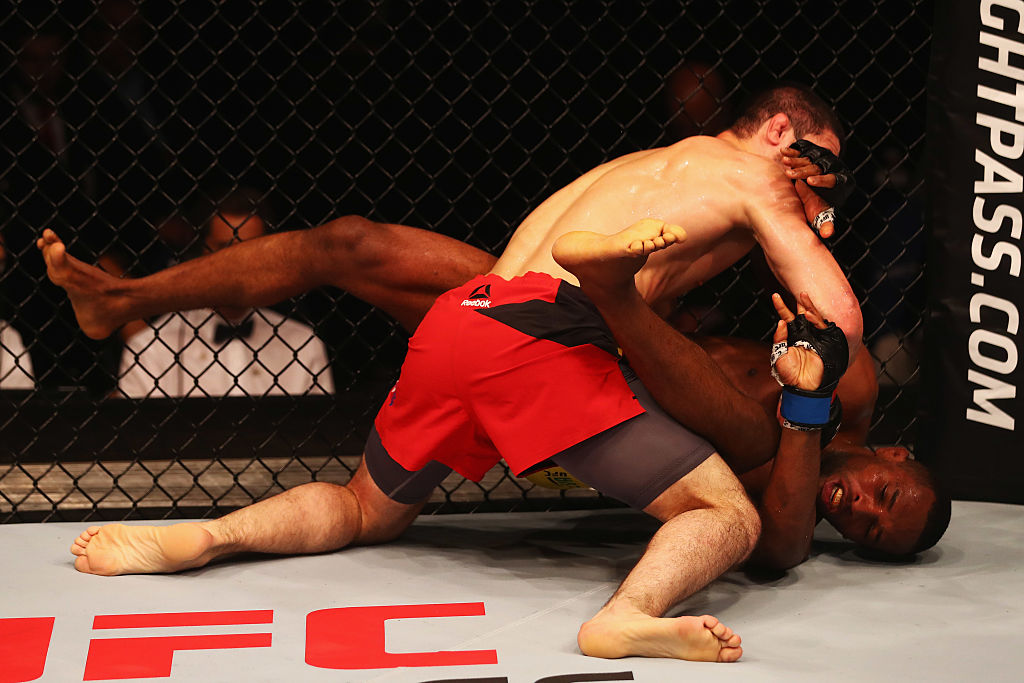 They said it:
Rustam Khabilov: “Of course I was confident that I had won the fight but I didn’t expect it to be a unanimous decision. I thought perhaps it was a split decision but, still, I was sure that I had won this one. He surprised me in the fight though. I didn’t expect that he would be as strong as he was. He prepared very well for my game plan and he defended the takedowns very well. I could see that he had done his homework preparing for the fight. It was tough to take him down."
Leandro Silva: "He's a very tough opponent. We knew he would try to grapple. I was closest to winning the fight. I don't agree with the judges. In the last round he was running and I was being aggressive. I shouldn't have left it to the judges."