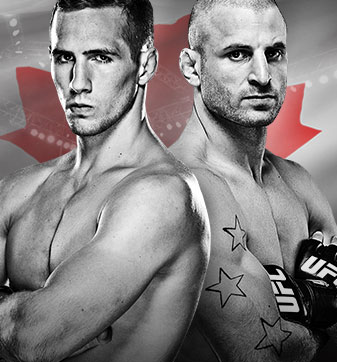 Two of the best welterweights in the world will square off this weekend as the UFC makes its promotional debut in Halifax, Nova Scotia, Canada, with Rory MacDonald looking to build on his past two wins as he takes on former Strikeforce welterweight champion Tarec Saffiedine in the five-round main event.

The two winners from the recent season of TUF Nations will also be featured on the card, as Chad Laprise takes on Yosdenis Cedeno while Elias Theodorou faces Bruno Santos.

All told, this UFC Fight Night card from Canada should be a stellar show, and in today's fantasy preview we're going to take a look at some of the biggest matchups on the main card to see who has the advantage going into Saturday night and if there's an upset worth picking to get ahead in the UFC Pick Em competition.

Rory MacDonald has long been considered the future of the welterweight division, but to prove he belongs in the same conversation as champions like Georges St-Pierre or Johny Hendricks, he first has to compete for the world title.  He hasn't gotten there yet, so this weekend's fight is key for MacDonald's future, especially considering this will be his first main event since joining the UFC in 2010.

McDonald is a powerfully strong welterweight with a size advantage over almost every fighter in the division. He has one of the best jabs in the sport and holds the third highest strike differential amongst welterweights in the UFC.  He lands 3.92 strikes per minute with nearly 44 percent accuracy.  He also showcases some of the best wrestling defense in the sport, where he blocks almost 89 percent of the takedowns attempted against him.  MacDonald has struggled to put fights away lately, going to decisions in his last five fights in a row, and this will be his first time preparing for a five-round bout.

Former Strikeforce champion Tarec Saffiedine once again enters a fight as a massive underdog, despite the fact that he always seems to find a way to win even in the most dire circumstances.  Saffiedine wasn't even sure he'd make it to the UFC when Strikeforce was shuttering its doors for the final time, but a blistering performance where he battered Nate Marquardt for five straight rounds earned him his shot.  He debuted earlier this year and defeated Hyun Gyu Lim in an exciting matchup that earned him Fight of the Night honors in his first trip to the Octagon.

Saffiedine is an extremely hard fighter to prepare for because he comes at so many different angles and possesses one of the most dangerous weapons in the entire UFC with his nasty barrage of leg kicks that can punish an opponent over five rounds.  Saffiedine has perfected his kicks to the point where he leaves fighters bruised and bloodied and barely able to walk when the fight is over.  He did it to Marquardt and did it again to Lim in his last fight.

There's no mistake that MacDonald is the favorite here because he's a hard matchup for anyone at welterweight with his long range and ability to put pressure on from the outside while diving inside to finish with body shots and hard punches.  MacDonald possesses good wrestling as well although he hasn't used it much lately, but if he starts eating kicks from Saffiedine it might be a good time to use that as a counter to stop the attacks.

On paper, MacDonald should win this fight.  He's a superior athlete with a better set of overall skills. That said, Saffiedine is a stylistic nightmare for a lot of fighters and that includes MacDonald.  His leg kicks are the ultimate equalizer and he's been in five-round fights on a couple occasions recently. Plus, it's no secret that MacDonald has faded in previous fights by just going deep into the third round.  If this fight makes it past round two, MacDonald will have to really show he's developed a gas tank or he could start facing the brunt of Saffiedine's attacks and that spells almost certain doom for his lead leg.

Raphael Assuncao will enter this weekend in a much different mindset than what he expected just a few days ago. Originally with a win over Caraway, Assauncao was a shoe-in to earn the next shot at UFC bantamweight champion T.J. Dillashaw. Unfortunately for him, former champion Dominick Cruz returned to action at UFC 178, dispatched of Takeya Mizugaki in 61 seconds and was immediately declared the new No. 1 contender for the title.

It means Assuncao will compete this weekend knowing full well he'll probably have to fight at least one more time before potentially competing for the belt.  It may not seem like much, but that kind of mental switch has crumbled other fighters in the past so Assuncao will have to fight through disappointment to ensure he still stays in line for a title shot at some point in 2015.

To get there, he'll face a tough customer in Caraway, who has started to come into his own, especially since dropping down to bantamweight. Caraway is a fierce ground fighter with good wrestling while averaging three and a half takedowns per fight. He's dangerous with his submission game as well, but he might have a hard time employing it against a Brazilian Jiu-Jitsu black belt like Assuncao.

Assuncao is a veteran of the sport and has faced the best of the best for years.  He's a hard-nosed striker, landing 3.3 significant strikes per minute, while possessing great defense by dodging over 70 percent of the strikes attempted against him.  Assuncao does have a formidable ground game as well, although he prefers the stand-up battle lately.

The key for Assuncao is not allowing the outside factors of the title race to affect his performance in the Octagon. If he fights to the ability he normally has, Assuncao should win this fight by decision although he hasn't been able to pull away from opponents in his last few fights.  The last thing he should do is give Caraway an opening to get a few takedowns, which could swing the momentum and the judges’ favor.

TUF Nations welterweight winner Chad Laprise gets back in action for the first time since winning the show as he takes on Yosdenis Cedeno in an interesting matchup between two fighters who prefer a good stand-up battle.

Laprise proved when he was fighting on the reality show that he packs a serious punch, at one point even breaking the jaw of one of his opponents. He's also a volume striker, landing 4.73 strikes per minute, which means he's not just throwing haymakers to look for the knockout.  He's just a very good striker with serious boxing and some of the best power at 170 pounds in the UFC already.  His defense is also solid, as he blocks over 61 percent of his opponent's strikes.  Laprise showed in his last fight against a wrestler that he can also stuff the takedown, and he defends almost 78 percent of those attempted.

Cedeno certainly has a tough fight ahead of him, but he's got the hands to counter Laprise, and with a 70 percent finishing rate by knockout or TKO, he's more than capable of firing back and getting the finish. During his brief UFC career, Cedeno hasn't even attempted a takedown or been taken down and that's not a good thing when facing a fighter like Laprise on his home soil.

Expect Laprise to show patience early, but once Cedeno starts to open up, the Canadian will start to unleash his combinations and then it's just a matter of time before one slips through and puts a stop to the fight.

The middleweight winner from TUF Nations will also debut this weekend following his victory on the show finale, as Elias Theodorou takes on Bruno Santos in Halifax.  Theodorou was already expected to be a real prospect when he made it to the UFC, but now that he has the Ultimate Fighter experience on his resume, he's even better.

Theodorou is a big middleweight with well-rounded skills in all areas, although taking an opponent to the mat and pounding them into hamburger still seems to be his favorite place to finish a fight.  Theodorou is an imposing fighter who landed over seven strikes per minute in his UFC debut, with more than four takedowns per fight on average.  His takedowns have been nearly impossible to stop, and as he showed in his last bout against Sheldon Westcott, he is absolutely relentless when he lands on top.

Santos will be a tough matchup who may try to counter with his own wrestling attacks.  The Brazilian put Chris Camozzi down over and over again during his last fight, and as he’s averaging over two and a half takedowns per fight, he's no stranger to mat work in the UFC.  Where Santos falls short in this fight is that Theodorou is a better wrestler, he has longer reach and he's a bigger threat on the ground.  Theodorou is aggressive and strong, and once he puts Santos down, he will open up with a barrage of strikes until the fight ends or he just beats up the Brazilian for three straight rounds. Either way the result is the same