Fight Night Goiania: By The Numbers

Take a closer look at Fight Night Goiania in this edition of By The Numbers. 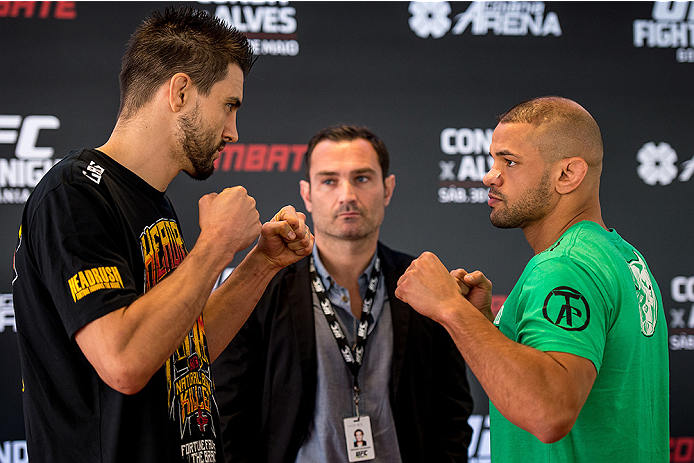 4
Current ranking of Carlos Condit as a UFC welterweight

93.1
Finishing rate by “The Natural Born Killer” earning 27 stoppages across his 29 pro victories

9
Finishes by Condit in UFC/WEC competition, tied for 3rd most with Thiago Alves in UFC/WEC welterweight combined history behind Matt Brown’s 10 and UFC Hall of Famer Matt Hughes’ 12

9
Fight Night bonuses by The Natural Born Killer in UFC/WEC competition, tied for 2nd most in UFC/WEC welterweight history

5
Of those awards were Fight of the Night including Condit’s three consecutive bouts at UFC 154, UFC 158 and UFC Fight Night: Condit vs. Kampmann 2

2.72
Significant strikes landed per minute rate by Condit in round one in UFC competition

3.54
Significant strikes landed per minute rate by Condit in round two in UFC competition

4.62
Significant strikes landed per minute rate by Condit in round three in UFC competition

100+
Significant strikes landed by Condit in two separates UFC bouts - against Nick Diaz and Martin Kampmann, only one of six UFC welterweights to accomplish this feat

12
Current ranking of Thiago Alves as a UFC welterweight

13
UFC wins by Pitbull, tied for 4th most in UFC welterweight history

9
Of those wins were by finishes including Alves’ most recent second round KO/TKO of Jordan Mein at UFC 183, 3rd most in UFC welterweight history

8
KO/TKOs by Alves inside the Octagon, 2nd most in UFC welterweight history behind Matt Brown’s 9

232
Leg kicks landed by Pitbull, 2nd most in UFC history behind Donald Cerrone’s 250

52
Leg kicks landed by Alves at UFC on FOX: Werdum vs. Browne, 2nd most landed in a three round UFC fight behind Benson Henderson’s 52 at UFC Fight Night: McGregor vs. Siver

1434
Days between Nik Lentz and Charles Oliveira’s first Fight of the Night earning scrap at UFC Live: Kongo vs. Barry at lightweight and their upcoming rematch this Saturday at featherweight

8
Current ranking of Nik Lentz as a UFC featherweight

22
Takedowns by “The Carny” at 145 pounds, tied for 2nd most with Jimy Hettes in UFC featherweight history behind Dennis Bermudez’s 28

20+
Takedowns earned by Lentz in two different weight classes in the UFC, only Demian Maia and UFC Hall of Famer Randy Couture have accomplished this feat as well

10
Takedowns landed by Lentz against Diego Nunes at UFC on FX: Belfort vs. Bisping, 2nd most in UFC/WEC featherweight history behind Hettes’ 11 at UFC 141

9
Current ranking of Charles Oliveira as a UFC featherweight

6
Submission wins by “do Bronx”, no fighter has earned more submission wins inside the Octagon since Oliveira’s debut on August 1st, 2010

100
Percentage of Oliveira’s first six UFC wins were by submission, only fighter in modern UFC history (post UFC 28) to earn their first six wins by submission

1
Calf slicer submission in UFC history by do Bronx against Eric Wisely at UFC on FOX: Evans vs. Davis

103
Seconds it took for Oliveira to tap Wisely with the calf-slicer at UFC on FOX: Evans vs. Davis, 5th fastest submission in UFC featherweight history