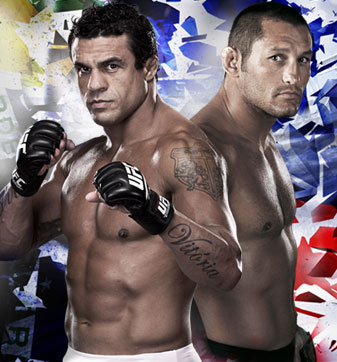 It's been seven years since Dan Henderson defeated Vitor Belfort in PRIDE Fighting Championships, but the old rivals will finally meet again this weekend at UFC Fight Night in Brazil as part of a huge card headed to South America headlined by the light heavyweight showdown.

In their last fight, Henderson ruled the day with a superior clinch game mixed in with his wrestling and takedowns.  Belfort just had no answers for Henderson's strategy, but now he has his chance at revenge.

Also on the card, the originally scheduled final from the first season of The Ultimate Fighter Brazil will take place as Cezar “Mutante” Ferreira takes on Daniel Sarafian.  An injury forced Sarafian out of the finals against Mutante the last time, but now he will get his shot at redemption, even if the Ultimate Fighter title isn't on the line.

In today's fantasy preview, we take a look at the main card, including the headlining five round fight between Henderson and Belfort, as well as some of the other pivotal matchups on the card.

Vitor Belfort returns to his home country of Brazil, where he's found a lot of success lately with knockouts over Michael Bisping and Luke Rockhold in back-to-back fights.  He's going to come face to face with an old foe this time around, however, as grizzled veteran Dan Henderson awaits him on Saturday night.  While Belfort is riding a two fight win streak, Henderson is currently on a two fight skid after losing razor-close decisions to Rashad Evans and Lyoto Machida.

Many fighters find it tough to compete in Brazil due to the travel and home crowd being decidedly against them, but Henderson isn't the average fighter.  Henderson isn't the kind of fighter to let any situation rattle him, which makes him the perfect candidate to go into Brazil and face Belfort.

Stylistically, these fighters both love a good knockout and have plenty of them on their respective records.  Belfort has been blistering of late with a new found arsenal of kicks that led to two straight finishes, but if there has ever been a lingering weakness in his game it's been his wrestling. If you look at Belfort's record, there aren't many fighters that hold wins over him, but the ones that do almost all have a similar background - Jon Jones, Randy Couture, Dan Henderson - all wrestlers that could negate Belfort's speed and power by taking him to the mat.  While it's no secret that Henderson loves to unload his dynamite right hand, better known as “The H-Bomb,” he's almost smart enough to know where Belfort comes up short.

If Henderson can get inside and pull Belfort to the mat or get him stuck in the clinch through the first round or two, he may break the Brazilian's mental fortitude before breaking him physically later in the fight.  Belfort is no pushover to finish, so this one may make the final horn and go to the judges’ decision, which still ultimately favors Henderson.  This is an underdog worth betting in this event.

Two former members of Team Belfort from the first season of the Ultimate Fighter will square off in the co-main event of UFC Fight Night: Belfort vs. Henderson.  Cezar Mutante is a long time student of Belfort, who actually picked up and moved to South Florida to train with his teacher full-time, while Sarafian stayed in his native of Brazil, which could actually benefit him in the fight.

Sarafian is a nasty, wild striker when he wants to unleash his power, but like any fighter with that kind of style, he has to be careful not to let too many punches stray while not protecting his head.

Neither Sarafian or Mutante will win awards for their statistical records in any of the major categories from striking all the way to grappling.  One area that may come into play, however, is Sarafian's defense (almost 60-percent) versus Mutante, who only has just over 48-percent striking defense.  Sarafian has the kind of power and creative striking to put the hurt on any opponent he faces.  He's got a variety of weapons as he displayed during the reality show, including a quick and devastating flying knee he used to make the finals in the first place.

Sarafian is aggressive and unrelenting when he gets an opponent hurt.  If Mutante wants any chance of winning this he needs to weather the early storm and apply a tactical strategy. Otherwise, Sarafian will get another highlight on his record, finishing the fight inside the distance, while vindicating himself as the true Ultimate Fighter champion.

Fireworks are on tap when former Strikeforce champion Rafael “Feijao” Cavalcante faces Croatian striker Igor Pokrajac in a light heavyweight bout on the main card in Brazil.  Both fighters are coming off disappointing losses — Feijao losing by knockout to Thiago Silva, and Pokrajac in a lackluster fight against Ryan Jimmo.

Feijao has to know this fight could make or break his UFC career after an abysmal showing in his last trip to the Octagon, where his conditioning backfired just minutes into his debut.  Maybe it was an adrenaline dump given the fact that it was his first UFC fight, but Feijao has to know he's on a short leash after his last bout.

The fact is when Feijao is on, he's one of the most powerful and devastating strikers on the roster.  He's got a closet full of weaponry he can use, including fists, elbows and knees, not to mention a wicked spinning back fist he used once to knock out Yoel Romero in Strikeforce.  Pokrajac is no stranger to standup battles, given his striking background coming from the same country that produced former PRIDE legend Mirko Cro Cop.  Still, his 42.75-percent striking defense is worrisome when facing a power puncher the likes of Feijao.

Expect this one to end early and end violently if Feijao has his way.  He has to regret the way his last fight ended, and now there's no doubt he wants to make an example of Pokrajac

It's a reversal of positions for these two welterweights, as just a few years ago, Paulo Thiago was the hot prospect after his knockout win over Josh Koscheck, and now 1-0 UFC veteran Brandon Thatch has the same label attached to his name as he heads to Brazil for his second bout inside the Octagon.  Thatch was blistering in his debut, making short work of Ohio native Justin Edwards, but he's taking a decided step up in competition facing Thiago in Brazil.

Thiago has never quite reached the heights of the welterweight division, but he's been a very tough and serviceable fighter for a few years now.  A suffocating submission game is Thiago's calling card, but he's got granite in his hands if a punch lands — just ask Koscheck.  That said, Thatch is the real deal and a legit prospect in the division.  Tall, lean and quick, Thatch has the tool set to give anyone at welterweight a run, and while it's way too early to start talking about him entering top ten level fights, he could absolutely get there in a couple of years.

Beating Paulo Thiago in his home country would certainly go a long way on Thatch's resume.   Thatch was able to get a quick, first round knockout in his last fight, but he's not likely to end this one the same way.  He may have to drag Thiago into the late parts of the third round to eke out a decision, but coming home to America with a win is all that matters, and Thatch should get the job done in this one.