Saturday’s UFC Fresno event is in the books, and now that the dust has settled in California, it’s time to go to the scorecard to see who the big winners were at Save Mart Center.

When I spoke to Brian Ortega before Saturday’s main event against Cub Swanson, I asked him if he went out of his way to put himself in difficult situations sometimes. He chuckled and admitted that he has. I can respect that attitude because it shows a true craftsman at work, someone willing to see if everything he learned in the gym can be applied in a fight. Of course, that can lead to a bad night at the office, especially against a veteran like Swanson, who was having a lot of success with his striking, particularly his body punches, against “T-City.” But that’s when Ortega showed his maturity, as he was able to adapt and take the fight where he wanted it to go when necessary. It first came up late in the first round when he nearly submitted Swanson and then in the second when he did finish the job with a guillotine choke. That ability to change tact on the fly will help him when he gets a world title shot, and while I wouldn’t mind seeing him in with Max Holloway immediately, Ortega gracefully dodged such talk by saying he will wait for a shot at the winner between the champ and top contender Frankie Edgar. Don’t worry, I get the idea it will be worth the wait.

Over the years, Marlon Moraes clearly made a name for himself as the top bantamweight NOT fighting in the UFC. This year he made his move to the Octagon, and while he probably could have chosen an easier path – or at least a less busy one – he instead took on Raphael Assuncao, John Dodson and Aljamain Sterling, winning against Dodson and Sterling and losing a split decision to Assuncao. That’s quite a year for the Brazilian, who lived up to all the hype. And after his Knockout of the Year candidate against Sterling, fight fans will want to see what tricks “Magic” can pull off in 2018. 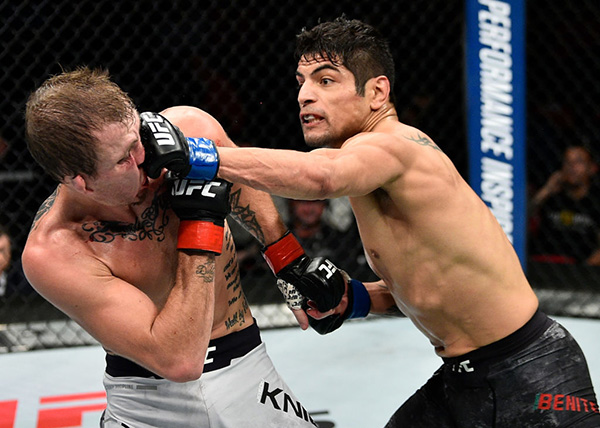 Jason Knight during the UFC Fight Night event on December 9, 2017 in Fresno, California. (Photo by Jeff Bottari/Zuffa LLC)" align="center" />Maybe Jason Knight thought he was going to walk right over Gabriel Benitez after going 4-1 in his previous five fights and earning himself a place in the featherweight top 15. Whatever his intentions were, though, Benitez had other ideas, as he scored a clear-cut three-round decision over Knight and announced his arrival to the upper reaches of the 145-pound weight class. Will the win over Knight earn the Tijuana native a spot in the rankings? We’ll find out soon, but even if he doesn’t get one, know that his first fight of 2018 will likely be against another ranked contender, giving him another chance to shine on the big stage.

4 – Trevin Giles
Sometimes poise in the heat of battle is the hardest thing to achieve for a young fighter, but Trevin Giles showed plenty of it in his UFC debut win over James Bochnovic, as he patiently broke his foe down and stopped him in the second round. On Saturday, Giles remained calm, cool and collected against Brazilian vet Antonio Braga Neto, and again, the result was a stoppage victory for a Texan who looks like he is going to be a problem (pun intended) for the rest of the middleweight division in the future.

5 – Alex Perez
Alex Perez certainly paid his dues on the way to the UFC, going 17-4 on the regional scene. But with a nickname like “The Decision,” the door wasn’t exactly being smashed down on his behalf. So what to do? First, drop the nickname, and when the call comes, makes sure you leave an impression, and that’s what the Lemoore product did when he got a spot on Week Five of Dana White’s Tuesday Night Contender Series in August, submitting Kevin Gray in less than three minutes. That win got him a UFC contract, and on Saturday, he kept the finishes coming as he submitted Carls John de Tomas in two rounds. The Decision? Not anymore.