Brian Ortega is one of the most talented young fighters in the featherweight division, but he almost always winds up putting himself in bad positions in a fight. That’s great for those of us watching, but that can catch up to a fighter sooner or later. Cub Swanson is the kind of fighter who will make sure an opponent’s first mistake is his last one, so if Ortega chooses to place himself in harm’s way on Saturday, Swanson will harm him. If “T-City” plays it cool, he could secure the biggest win of his career.

JASON KNIGHT VS GABRIEL BENITEZ
Landing in Saturday’s co-main event slot is a featherweight battle between the always aggressive Jason Knight and the underrated Gabriel Benitez. Knight is looking to make a statement after his recent loss to Ricardo Lamas, but Benitez knows that he can go from relative unknown to contender in the space of three rounds in Fresno, so a wild one could ensue when the Octagon door closes. 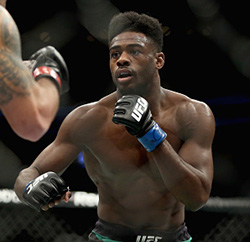 Stepping in on short notice for Rani Yahya, Marlon Moraes has now made his bout with Aljamain Sterling one of the most important bantamweight bouts of the year. It wouldn’t be a surprise to see the winner of this one end up in the 135-pound title race, and he would deserve it, because getting through these 15 minutes won’t be easy for either fighter.

SCOTT HOLTZMAN VS DARRELL HORCHER
Lightweights Scott Holtzman and Darrell Horcher are expected to deliver a Fight of the Night candidate this weekend, and it’s hard to disagree with that assessment, as both are no nonsense, gritty competitors who are unafraid to get their hands dirty in order to get a win.

ERYK ANDERS VS MARKUS PEREZ
Former Alabama linebacker Eryk Anders blitzed Rafael Natal in his short notice UFC debut this summer, but this time he won’t be able to sneak up on anyone, as fight fans are now eagerly anticipating what he will do next. That might benefit Brazilian newcomer Markus Perez, as now he’s the guy coming out of nowhere in search of a debut win that will put him on the middleweight map immediately.

Two of California’s top prospects get after it in Fresno, with Team Alpha Male’s Benito Lopez making his Octagon debut against Albert Morales. Lopez has plenty of early finishes on his record, but in his win over Steven Peterson on Dana White’s Tuesday Night Contender Series, he proved that he can dig deep and win a tough fight as well. He’s likely to get that tough fight from Morales.

CARLS JOHN DE TOMAS VS ALEX PEREZ
With 22 fights under his belt, Alex Perez is one of the most experienced debutants to hit the UFC in a while, and after finally earning his spot on the roster with a first-round finish of Kevin Gray on DWTNCS, it doesn’t look like he’s going to be giving up that spot anytime soon, even though relatively inexperienced Carls John de Tomas will be doing everything in his power to spoil Perez’ debut. 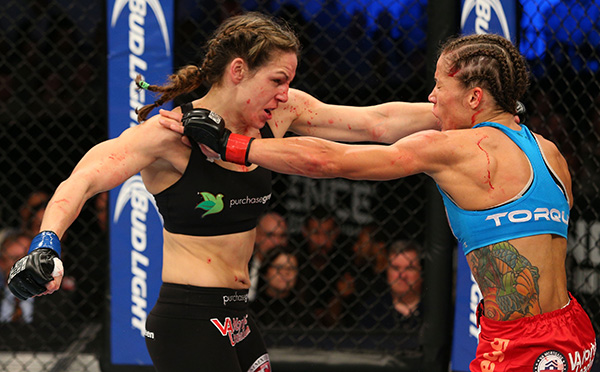 I hope I’m not being insulting when I say that the first bout between Alexis Davis and Liz Carmouche wasn’t going to find its way onto any Fight of the Year lists. But a lot can change in four years, most notably both veterans deciding to test the water in the flyweight division on Saturday. That will likely prompt a sense of urgency, as a dominant win could skyrocket the victor into the upper reaches of the 125-pound weight class.

LUKE SANDERS VS ANDRE SOUKHAMTHATH
Luke Sanders may only be 1-1 in his UFC career thus far, but he’s thrilled fans in both bouts and there’s no reason to expect anything different when he faces late replacement Andre Soukhamthath this weekend. The difficulty for Sanders has been staying active, and hopefully this bout will kick off an injury-free run for the Tennessee product, who will get a fight out of Soukhamthath, someone who will look to keep the judges out of it after a pair of split decision losses in his first two trips to the Octagon.

FRANKIE SAENZ VS MERAB DVALISHVILI
Merab Dvalishvili looked spectacular in the knockout win that earned him a UFC contract from Dana White on the UFC President’s “Lookin’ for a Fight” show, and he comes highly recommended from his coach, former welterweight champ Matt Serra. So there are a lot of expectations on Dvalishvili, and if he is the real deal we’ll find out in a hurry, because Frankie Saenz is one of the grittiest vets in the sport. Forget Saenz’ three-fight losing streak. He’s still got the goods, and he will push Dvalishvili. 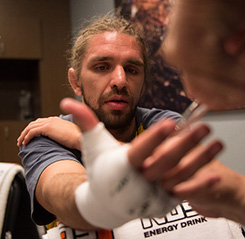 Davi Ramos came into the UFC with a lot of expectations on his shoulders. Unfortunately, he was fighting as a welterweight and on short notice. On Saturday, he’ll be back at 155 pounds and will be fighting with a full training camp behind him, making him a tough test for veteran Chris Gruetzemacher, who will be back in action for the first time since a February loss to Chas Skelly, his first defeat since 2009. We’ll see how the former TUF competitor rebounds from that setback.

ALEJANDRO PEREZ VS IURI ALCANTARA
Take away a 23-second submission loss to Patrick Williams in 2015, and former TUF LATAM winner Alejandro Perez would be 4-0-1 in the UFC. Even with that defeat, he’s unbeaten in his last four heading into his clash with Iuri Alcantara, which finally provides Perez’ ticket to the top 15 if he should defeat the Brazilian veteran.

ANTONIO BRAGA NETO VS TREVIN GILES
Interesting opener between the returning Antonio Braga Neto and Trevin Giles. Giles impressed with his patience and poise in his UFC debut, but if he stays that cool against Neto, it will give the Brazilian the time to get comfortable again in the Octagon, and if that happens, the edge swings towards Neto.