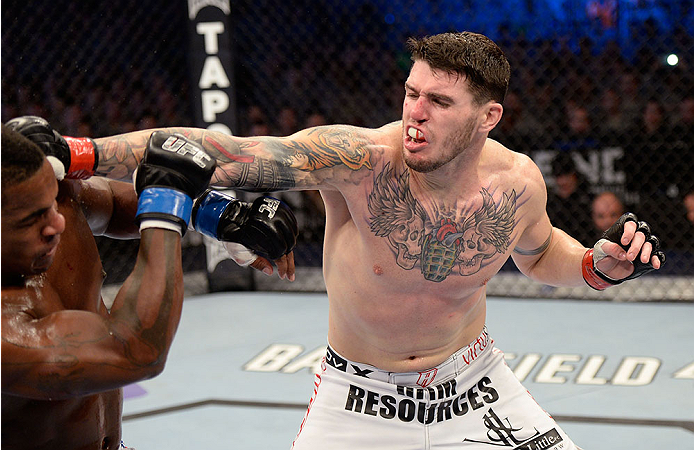 The UFC Fight Night: Jacare vs. Mousasi preliminary card on Friday will feature four fights with competitors looking for redemption after recent losses.

Former Ultimate Fighter competitor Al Iaquinta got caught on the wrong end of a submission in his last fight so the Team Serra/Longo fighter will surely be gunning for a finish when he takes on tough Brazilian veteran Rodrigo Damm.

Also on the preliminary card, middleweights Rafael Natal and Chris Camozzi are both in need of a win and it should bring out the best in the fighters as they look to move back up to the main card with an impressive showing in Connecticut.

Today's fantasy preview will give you a breakdown of those four preliminary card fights to see who will likely walk out victorious on Friday night.  With the main card chocked full of insanely close matchups, winning the preliminary card will be crucial to gain points and best your competitors in the UFC Pick Em game.

Middleweight champion Chris Weidman has been a big influence on Al Iaquinta over the years, as they both came up together under the tutelage of former UFC welterweight champion Matt Serra and striking coach Ray Longo.  Iaquinta has shown flashes of brilliance in some of his past fights, but he's still struggled to pull the trigger to put opponents away and it cost him in his last fight, where he fell by submission to Mitch Clarke.

Still, Iaquinta has the tools to be something special in the lightweight division and now is the time to put up or shut up as he headlines the preliminary card in Connecticut.

Iaquinta is best known as a striker, where he's extremely active on his feet, landing over four significant strikes per minute with 44 percent accuracy. He's also shown good defense, blocking 67 percent of the strikes against him. His ground game isn't shabby because he puts an opponent on their back about two times per fight, and coming from the camp where he trains, Iaquinta certainly has a submission game at his disposal.

Rodrigo Damm is going to be a tough opponent to put away because he's one of those fighters who doesn't stand out for any one thing he does, but he's incredibly hard to figure out when he's fighting and he never goes away.  Damm is almost as active as Iaquinta on the feet, where he's averaging 3.39 significant strikes landed per minute, but despite his jiu-jitsu heritage, his ground game has been virtually nonexistent in the UFC.

Damm isn't going to pop off the TV screen with flashy moves or one punch knockout power, but he's very good at sticking around in every minute of every round and that can sometimes make him an impossibly tough matchup for some fighters.

In this case, Iaquinta knows he can win this fight on the feet as long as he keeps his volume up and his combinations heavy.  If Iaquinta puts Damm on his heels and doesn’t let the Brazilian find his timing on a counter strike, the New York native will be able to move in and out constantly with a stiff jab and quick combinations.  Over the course of three rounds, those punches will start to add up and when the final horn sounds it will give a win to Al Iaquinta.

Rafael Natal and Chris Camozzi were first scheduled to meet over a year ago, but as circumstances changed, the fighters were pulled in different directions and never actually got to face each other until now. There's also no denying that with both men coming off consecutive losses, it's do or die time for Natal and Camozzi in this one.

Natal might be one of the most hot and cold fighters in the UFC, depending on who he's facing at the time.  In some fights, Natal looks like one of the best middleweights in the sport, putting on a show with Tor Troeng or submitting fighters like Sean Spencer.  Other nights, like in his last fight against Ed Herman, Natal shows up flat and just doesn't seem to know which way to go with his strategy.

The same can be said in many ways for his opponent Chris Camozzi as well.  Camozzi is best known as a striker, as he lands nearly four significant strikes per minute with 41 percent accuracy, but he's also capable of serious struggles when he's not the faster fighter, as was the case when he fought Lorenz Larkin, or if he can't stop the takedown, like in his last bout against Bruno Santos. Camozzi has the ability to stay close in every fight he's involved in, but rarely has he pulled away in dramatic fashion and it's cost him several times in the UFC.

This could be another case of that because Natal is heavy-handed enough to give Camozzi a headache on the feet, and if he mixes in his wrestling and jiu-jitsu game, that's one area he's clearly superior in than his opponent.  Natal is a black belt in Brazilian Jiu-Jitsu under Renzo Gracie, but oftentimes in fights he falls so in love with his striking that you'd almost forget he's a submission ace on the mat.

Natal just needs to mix things up in this fight to confuse and eventually frustrate Camozzi and he'll get the win.  He can't turn this into a straight kickboxing match because that's the place where Camozzi excels, but if Natal avoids just standing on the outside and exchanging strikes he's got the better overall game to get the win.

Ultimately, this really is a toss-up fight, but Natal has more ways to win, and in a fight where both competitors know a victory is crucial, the advantage has to lie with the Brazilian, given his ability to slow an opponent down to a crawl and then drag them into deep waters on the mat.  He won't likely finish Camozzi, so expect a decision going Natal's way on Friday night.

In a new matchup on the card, Tateki Matsuda steps in on short notice to face former Ultimate Fighter contestant Chris Beal.

Matsuda is a student of Mark Dellagrotte and his Team Sityodtong school in Boston, which has produced a slew of fighters over the years, including his work with Kenny Florian early in his UFC career as well as recent UFC standout Rob Font.  It was actually Font who was originally scheduled to fight Beal on this card, but an injury forced him off the show as well as his replacement Dustin Kimura, so in steps Matsuda to take the fight on Friday night.

Matsuda was actually on The Ultimate Fighter season 14, but lost in his preliminary round matchup against Dustin Pague to get into the house. Matsuda is a pretty well-rounded fighter, but coming from Team Sityodtong it's no secret that striking is definitely his best weapon.  That might also be his downfall facing Beal in this fight.

Beal is a creative and explosive stand-up fighter who showcased his knockout power with a flying knee finish in his last bout, which earned him a Performance of the Night bonus.  Beal didn't get to show his best performance when he was eliminated from The Ultimate Fighter season 18, where he competed with an injured hand, but now that he's healthy he looks to be an exciting addition to the bantamweight division.

Beal may have been an underdog to Font, but it's not the case with his teammate.  Beal has been preparing for this night for weeks and Matsuda steps into an impossibly tough situation, accepting the fight on short notice in his UFC debut.  If Matsuda shows any signs of nervousness in the opening moments, Beal can take advantage and get another knockout win on his record.  Matsuda is definitely tough and maybe he can find inspiration in Joe Soto's gutsy last-second performance against T.J. Dillashaw at UFC 177, but chances are he's going to get out struck and out matched in this fight.

Beal is the pick and he may finish this one in spectacular fashion.

Speaking of late replacements, Chas Skelly accepted his bout at this weekend's UFC Fight Night card just days after his last win over Tom Niinimaki in Tulsa, Oklahoma.  He faces Sean Soriano, who competes in his second UFC fight after coming up short in his debut against former PRIDE star Tatsuya Kawajiri.

Soriano comes into this fight as the better striker between these two featherweights and in his lone bout in the Octagon, the Blackzilians fighter managed to land with over 73 percent accuracy on the feet.  It's only one fight to judge by, but Soriano was still able to land good, hard shots while standing and he stuffed nearly all of his opponent's takedowns except for the big one that counted when he got submitted on the ground.

Skelly might be able to do the same thing with his wrestling background and work on a daily basis with UFC welterweight champion Johny Hendricks.  Skelly is a very good prospect, and while he came up short in his first fight with the UFC, he showed real promise with his quick submission win over Niinimaki just two weeks ago.  This quick turnaround might hurt some fighters, but Skelly will likely thrive on the pressure and that could make him even more impressive by Friday night.

Skelly will have to set his feet and circle away from the power Soriano possesses, but as long as he keeps his wits about him and keeps fishing for the takedown, he'll eventually land one and that's when he can put this fight away.  Skelly has great momentum going into this fight and he could wrap up another submission victory by putting Soriano away and picking up his second win inside a month in the UFC.