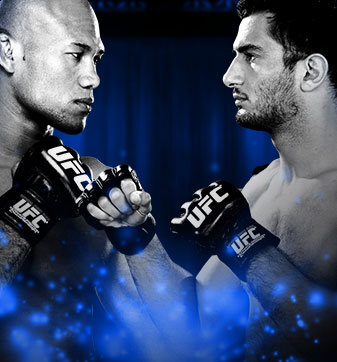 This week, the UFC not only returns to Connecticut for the first time in several years with the UFC Fight Night: Jacare vs. Mousasi card, but the show takes place on Friday, which longtime fans will remember as the regular stomping grounds for the promotion.

The show from the Foxwoods Resort Casino in Ledyard, Connecticut will be headlined by a middleweight matchup between two of the best fighters in the world at 185 pounds as Ronaldo “Jacare” Souza takes on Gegard Mousasi, with the winner moving very close to claiming the next shot at the title.

Also on the card, Alistair Overeem returns to action for the first time since teaming up with coach Greg Jackson and his team in Albuquerque, New Mexico, when he faces heavy hitter Ben Rothwell in the co-main event.

Today's fantasy preview will examine the main card, where all of the fights are razor close matchups with any number of possible outcomes, so getting more right than wrong on this show is absolutely crucial to winning this week’s UFC Pick Em game.

The main event on Friday night is not only a pivotal matchup in the middleweight division, but actually a rematch from a fight Jacare and Mousasi had back in 2008 while fighting in Japan.  The bout didn't last very long, as Jacare (with a full head of hair no less) took Mousasi down in the opening moments as he looked to apply his world class jiu-jitsu game.  The fight came to a dramatic end when Mousasi upkicked Jacare straight to the jaw and the moment his heel landed, the Brazilian was knocked out cold.

So while this fight is technically the second go round for these two men, considering how quickly their last bout ended, this really should be seen as an entirely new matchup.

Jacare has been on an incredible run since coming to the UFC.  He's 4-0 thus far in his Octagon career and he's a leading contender to fight for the belt if he can get a win on Friday night.  Jacare's submission game is well-known and should always be feared.  He's a multi-time world Jiu-Jitsu and ADCC grappling champion and he might have the best ground game in the sport, although lately he's been working tirelessly on his hands.

Jacare knocked out former middleweight title contender Yushin Okami two fights ago, and he's hitting like a truck when on his feet these days.  As much as his stand-up has improved, the ground game is still the place where Jacare stands the best chance to win this fight.  He had the second most takedowns and second highest takedown rate when he was competing in Strikeforce, and since coming to the UFC, Jacare has averaged 3.64 takedowns per 15 minutes.

So that means it's going to be up to Mousasi to stuff the takedown and work to knock Jacare out on the feet.  Mousasi is absolutely capable of doing both things, considering his 50 percent striking accuracy and the volume with which he strikes, where he lands over three and a half significant shots per minute.  His takedown defense is an area of concern, as he's blocking only 55 percent of the attempts against him, and he has to have that part of his game working on Friday or it's going to be a long night facing a fighter like Jacare.

Mousasi looked better than ever in his last fight against Mark Munoz and he may have just the game plan and calm nerves to rattle Jacare on the feet and stifle his ground game before unloading a knockout punch or kick deep into the fight.  Based on recent performances, however, the favor has to stay with Jacare because he's a much improved version of the fighter who faced Mousasi six years ago and he'll show that on Friday night.

Jacare has confidence in his hands like never before and his wrestling is still top-notch.  He may not submit Mousasi, but if he can get him to the ground in the opening minutes of the fight it will set the tone for the whole night.  When it's all over, expect Jacare to stand tall with a decision win, but don't count Mousasi out if he can block the Brazilian's takedowns and start unleashing his hands and kicks when the opening bell sounds.

Two of the best knockout artists in the UFC will square off when Alistair Overeem faces Ben Rothwell in the co-main event, with both men looking to establish themselves in a tough heavyweight top 10.

Overeem is a noted striker, having won the K-1 Grand Prix kickboxing tournament a few years ago, and his work inside the clinch is some of the best in the entire sport.  Overeem has the ability to put together some nasty combinations when he gets inside on opponents, mixing up short punches and a barrage of knees that usually end with devastating results.  He's an extremely active fighter for a heavyweight as well, landing nearly four strikes per minute with 58 percent accuracy.  While he's known best for his striking, Overeem is also a proficient ground fighter, averaging almost two takedowns per 15 minutes with nearly 74 percent accuracy. In his last fight, he took former UFC heavyweight champion Frank Mir down at will.

Rothwell is definitely a tough customer, especially on the feet, where he often puts together workmanlike performances where he simply out toughs his opponents and ends up with a knockout win.  Rothwell isn't the most technically proficient striker on the planet, but he has huge power in both hands and a deceptively good chin for a heavyweight.  Rothwell is also capable of grinding an opponent out on the ground, although since he's been in the UFC, he's favored a striking-heavy style in almost all of his fights.

As tough as Rothwell can be, Overeem still has a clear advantage in almost every aspect of this fight.  He's a better striker when he sticks to his guns and doesn’t get wild with his punches.  Overeem's inside game is maybe the best in the division next to heavyweight champion Cain Velasquez and he hits hard with bad intentions every time he swings for the fences.  Even in his two losses in the UFC to Travis Browne and Antonio “Bigfoot” Silva, Overeem was winning in both bouts and got caught after shutting down his opponents early.  If he can get the upper hand on Rothwell in the opening moments, Overeem could tack on another knockout victory to his already impressive record.

Add on the training he's been doing with the team at Greg Jackson's gym in New Mexico, and this could be a new Alistair Overeem, one who could certainly threaten for the heavyweight title at some point down the road.  Chances are he'll start his climb with a knockout win over Ben Rothwell.

Another intriguing heavyweight matchup on the card pits Derrick Lewis against Matt Mitrione in a fight that probably won't see the end of the first round, much less the judges actually rendering a decision.

Lewis has been an absolute wrecking machine thus far in his UFC career, pounding a hole through Jack May and Guto Inocente and finishing both fights inside the first round.  Lewis apparently watched a lot of Mark Coleman videos growing up because he's got the ground and pound attack down pat. He drops sledgehammer like punches whenever he gets an opponent on the mat, and he's averaging 3.81 takedowns per fight thus far, with almost 67 percent accuracy.  Granted, there are only two fights and less than 10 minutes of footage to work with, but Lewis has been nothing short of devastating since coming to the UFC.

There's a bit more known about Matt Mitrione, who was a raw prospect when he fought on The Ultimate Fighter during season 10 of the show, and has continued to progress as a fighter over the last few years.  Mitrione is deceptively fast for a heavyweight, with good footwork and head movement.  He's quick to the punch, where he lands 3.73 strikes per minute with over 50 percent accuracy.  His takedown defense is sitting at about 58 percent, which isn't great, but then again he's faced a laundry list of good fighters since debuting in the UFC.

The key to this fight all comes down to Lewis getting this fight to the ground and unleashing hell on Mitrione with strikes.  Lewis doesn’t have the wrestling prowess of a Cain Velasquez or even a Josh Barnett, but he makes up for it with raw strength and just overwhelming opponents.  Mitrione has to know Lewis is a monster on the ground, so he'll probably do everything in his power to avoid going there in the first place.  Lewis can maul opponents sometimes to the point where he just forces the fight to the mat, but can he get his hands on Mitrione enough to toss him to the ground, and if he can't get him there is there a plan B?

Based on what we've seen from his UFC career thus far, Lewis is going to be a lot to handle for many heavyweights, and if Mitrione wants to win he needs to do everything to stop the takedown or he'll be eating punches from above.  The threat of the takedown could be enough for Lewis to actually land a big shot on the feet to rattle Mitrione before going for the finish on the ground.  This fight is going to move fast and it's likely going to end in emphatic fashion, but a slight edge goes to Lewis because he's got the confidence on his side and while he's still developing, there's no denying this guy has top 10 potential.

The lightweight matchup between Joe Lauzon and Michael Chiesa is another ultra close fight on this main card that could go either way.

Chiesa has looked very good since winning The Ultimate Fighter a few seasons ago and outside of his one hiccup against Jorge Masvidal, he's been almost untouched in most of his fights.  Chiesa definitely favors the ground game, where he's been very aggressive with his submissions.  In his four UFC wins, Chiesa has put away three of his opponents by submission, but he'll have his work cut out for him in this fight if he plans to attack with that kind of strategy.

Joe Lauzon is a noted grappler as well, and he's got experience against a much higher level of competition during his career.  While Lauzon has bounced back and forth between wins and losses during big chunks of his time in the UFC, there's no denying he's always going to bring the fight and chances are when the night is over he'll go home with a bonus in his pocket (he's currently tied with Anderson Silva for the most post-fight bonuses in UFC history).

Lauzon is best known for his grappling game, where he averages 3.24 submission attempts per fight.  The moment he sees an opening, Lauzon is looking for an arm, a leg or a choke to finish the fight.  He won't stop from the first minute until the final horn sounds and that's a tough pace to maintain with any fighter, much less someone as talented as Lauzon.   While Chiesa is a proven talent with his ground game, everything he does well, Lauzon does just slightly better.

It's a big reason why Lauzon should be the choice to pick in this fight and maybe even by submission, because he's not afraid to grapple with anybody in the world and he might take it as a challenge to put away another noted ground fighter like Chiesa.  Lauzon has better takedowns and takedown defense, and once the fight hits the mat, it's Chiesa who will likely be fending off a submission-heavy attack, which probably ends with him wrapped up like a pretzel as the Massachusetts native finishes another fight and possibly takes home the record for the most bonuses in UFC history.