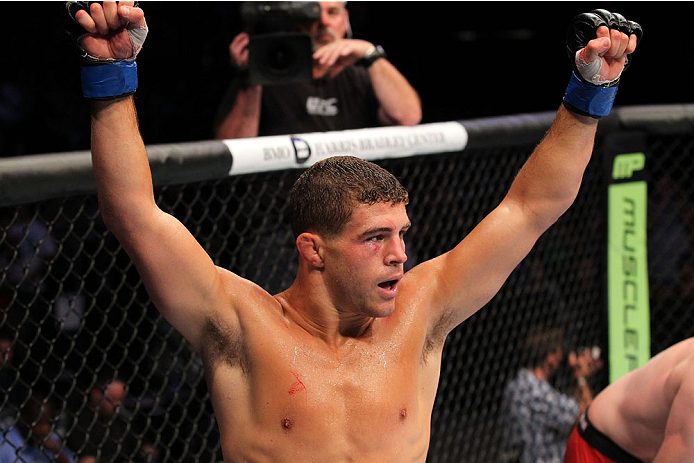 UFC Fight Night: Machida vs. Munoz will land in Manchester, England this weekend, and the early bouts on the preliminary card promise some of the best up and coming talent along with some very intriguing matchups.

Ultimate Fighter veteran Al Iaquinta gets back in action after a blistering performance in his last trip to the Octagon when he takes on Piotr Hallmann, who accepted the bout on short notice fresh off a win in his UFC debut.

Also on the undercard, England's own Rosi Sexton looks to get her first UFC win as she faces Brazilian striker Jessica Andrade.

It's a solid undercard with no easy choices for winners or losers, but in today’s fantasy preview, we will pick it apart and find out who has the best shot at victory.

1) Al Iaquinta faces Piotr Hallmann in the featured bout on the preliminary card, but it may end up being one of the best fights of the night.  Iaquinta is quickly turning into a lightweight version of his teammate Chris Weidman - a wrestler with power in his hands and great durability who can force opponents into his style of fighting.  Piotr Hallmann is just as good, however, with his great mix of standup and submission skills.  He even walked into the lion's den of Brazil for his last fight and beat a Brazilian – Francisco Trinaldo - which is no small task.

This is a tight matchup, so there's an extra 120 points up for grabs as well.  The pick leans towards Iaquinta due to his wrestling and ground control if he can put Hallmann down and keep him there.  Iaquinta has benefitted greatly working under coaches like Ray Longo and former UFC champion Matt Serra, and that trend should continue in this fight.  Iaquinta will look to keep Hallmann off balance and wear him out by the time the final horn sounds.

2)  Former Ultimate Fighter contender Luke Barnatt takes a huge step up in competition for this card taking on four-fight UFC veteran Andrew Craig.  The middleweights will clash in England with Barnatt looking to impress his home crowd while Craig hopes to build on his last win over Chris Leben in July.  When it comes to level of competition, Craig has faced much tougher opponents, hands down, since coming to the UFC.  He holds wins over Leben, Rafael Natal and Kyle Noke, and by Saturday he should have a win over Barnatt as well.  He's favored by -180 over Barnatt, who comes back at +150 as the underdog.  Craig just needs to negate Barnatt's long reach (78 inches to 73), but his style lends to getting inside on opponents anyway, and if he keeps the pressure on Barnatt it's going to be a long night for the Brit.

3) Rosi Sexton proved in her UFC debut that despite the fact she's probably a natural 125-pound fighter, there's no reason she can't be a force at bantamweight.  Sexton is a true veteran of MMA who has faced the best of the best in the women's division.  She lost in her debut against Alexis Davis, but the fight was an absolute war and she gave the Canadian contender a battle of attrition over three rounds.  Sexton is a well-rounded fighter with one of the best minds in MMA.  Andrade, meanwhile, is a great young prospect, but she's getting two tough tests in a row, drawing Sexton right after facing Liz Carmouche.  Sexton will likely look to drag this one to the ground, and she has to be wary of Andrade's guillotine choke because it's deadly, but once there the control is hers.  The best part about this fight is the value, where you'll also earn an additional 120 points for picking correctly, and the selection in this one is definitely Sexton by decision.

4) Cole Miller will step into do or die territory with his fight this weekend when he faces Ultimate Fighter veteran Andy Ogle. Miller has lost three out of his last four fights and four out of his last six, so a victory at UFC Fight Night is paramount.  Miller will enjoy a five inch reach advantage over Ogle, and he needs to use it to keep the boxing heavy Brit on his toes.  Miller is also the favorite with -185 odds in his favor to Ogle as a +155 underdog.  This fight might be primed for an upset, however, with Ogle fighting at home and Miller looking for consistency in his performances. There's no doubt Miller is the true veteran here, and he's developed much better hands in the last few years, yet while the ground is the avenue where he would have a distinct advantage over Ogle, he doesn't seem that interested in a jiu-jitsu battle these days.  Miller likes to push the pace, and if Ogle can counter strike and find his timing, he could pull off one of the bigger upsets on the entire card.