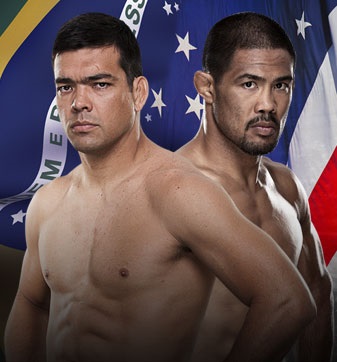 The UFC will return to England this weekend with a middleweight matchup headlining the card, as former NCAA champion Mark Munoz hopes to take one more step towards a middleweight title shot as he faces a formidable task from former light heavyweight champion turned Lyoto Machida, who will be making his middleweight debut with hopes of jumping right into the title picture with a main event win in England at Munoz's expense.

In today's fantasy preview we're going to examine the main card and look at who is a lock to walk away from the United Kingdom as a winner and who might have to pack their bags for the trip home with a newly minted loss on their record.

1) Lyoto Machida has struggled to find consistency over the last few years since dropping the UFC light heavyweight title, but he gets new life as a middleweight starting at UFC Fight Night in England. Machida is a supremely talented fighter with some of the most elusive footwork and striking in the world.  The problem he's had lately is not putting together enough of a volume of strikes to separate himself from his opponents when it comes to the judges' scorecards.  Machida has the fourth highest striking accuracy at distance in UFC history but in his last fight against Phil Davis he only managed to land 27 significant strikes over the course of three rounds.  That has to change if he wants to find success against Munoz on Saturday in England.

Munoz is a wrestler who does not quit until he gets the fight to the mat.  The former Oklahoma State wrestler averages 9.63 takedown attempts per every 15 minutes he's in the cage, which is the highest rate for any middleweight in the UFC.  If Munoz gets the fight to the ground, Machida could be in serious trouble.  Munoz has his own style of ground and pound technique he calls 'Donkey Kong punches,' and when he unloads them, an opponent better defend or risk waking up with a doctor's flashlight staring them back in the eye.

Takedowns are the key in this fight and that's where Machida should excel and go home with the victory.  He stops 81.8-percent of his opponent's takedowns while Munoz lands at only 27.1-percent accuracy.  Machida has to increase his striking on the feet because he's currently landing 2.76 strikes per minute and he has to get that number higher, given his elusive style, to guarantee victory.  Machida is enjoying life as a favorite in this fight coming in as a -360 favorite to Munoz, who is a +285 underdog in this one. Machida should come away with a unanimous decision in the fight so don't expect this one to end early, if ever, but either way, the former light heavyweight champion should get the victory.

2) If striking is your bag, the lightweight co-main event between Melvin Guillard and Ross Pearson will fill every need you desire in a fight.  Both competitors are known for the knockout - Guillard with a quick and devastating kickboxing game while Pearson possesses some of the best, most technical boxing the division has ever seen.  When you look at the statistics between the two fighters, especially on the feet, they are almost mirror images of one another.  Guillard and Pearson's striking accuracy and striking defense are almost identical, but there's one glaring stat that stands out that could be the difference in this fight.

Guillard is a knockout artist with power to put anyone away inside the distance.  He's landed the most knockdowns and knockouts of any lightweight in UFC history and he's third all-time in knockdowns in the entire promotion, sitting only behind Anderson Silva and Chuck Liddell.  Guillard is fearsome on the feet and he throws everything with power, and if it lands, there's no lightweight he can't knock out.  Guillard will be a very slight favorite in this fight with -150 in his corner while Pearson is a +120 underdog.  Expect Guillard to set the pace early with his dynamic striking attack and once he sees an opening he will pounce like a pitbull on a poodle, and that will be all she wrote and the judges can take the night off.

3) Keep an eye on the light heavyweight matchup between Jimi Manuwa and Ryan Jimmo to see one of the most explosive strikers in the division.  Manuwa is a devastating, powerful kickboxer who possesses the power to knock anybody in the world out at 205 pounds.  He's incredibly diverse as well, throwing kicks and punches from different angles constantly, which keeps his opponents guessing where the next threat is coming from.  Jimmo is no joke and won't just give in to Manuwa's power.  He's a grinder with the ability to make an opponent look bad because his takedowns and control are life draining during a 15-minute battle. Manuwa comes into the fight as a slight favorite at -200 while Jimmo is a +160 underdog.  Manuwa needs to keep this fight standing and keep Jimmo on his heels.  Letting Jimmo control the pace will virtually eliminate Manuwa's chances of winning.  Still, the threat of the knockout is a big storm cloud overhead in this fight but Jimmo is tough and he's only been finished once in his 20 fight career.  Manuwa is the pick by decision but don't be surprised one bit if Jimmo is able to get in the clinch and work for takedowns that earn him the upset victory.

4) While Conor McGregor may be receiving the lion's share of attention as an Irishman in the UFC, Northern Ireland’s Norman Parke is also a name to remember.  The winner of The Ultimate Fighter: The Smashes, Parke is a fun striker who has an almost Dan Hardy-esque quality about him.  Flashy and powerful with his punches and kicks, Parke doesn't mind engaging with his opponents while launching creative strikes to keep them off balance.  The best part about Parke is that while he loves to strike, he's also a former Irish wrestling champion and a judo practitioner, so he's not afraid of going to the ground.  He's also a great pick on this card because he's only favored as a -160 favorite over Jon Tuck at +130 odds, which means picking correctly in this fight will yield an extra 120 bonus points.  Parke hasn't gotten a finish in the UFC yet, and Tuck is undefeated and no pushover so this one could easily go all 15 minutes.