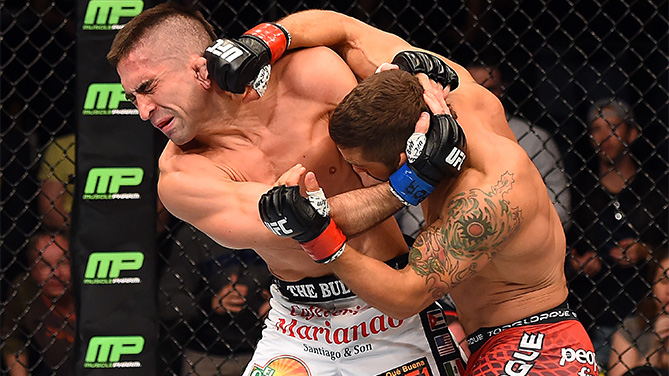 Saturday’s UFC Fight Night from Fairfax, Virginia, was like a sweet appetizer for the Final Four. No bracketology required.

In no particular order, a top contender cemented his position in the featherweight division, controversy reigned in the co-main event, a fighter called out the President and a star may have been born in the women’s bantamweight class.

It’s the day after, so let’s toss up these talking points:

1. Chad Mendes may or may not get a third shot at the UFC featherweight title currently held by Jose Aldo, but this much is clear: He earned the right to insist he’s next in line.
> WATCH: Chad Mendes Octagon Interview

There is still much to be settled before Mendes gets in the Octagon again. Aldo has a much-anticipated championship bout against Conor McGregor on July 11, and No. 2 contender Frankie Edgar meets Urijah Faber on May 16. After that, the division’s pecking order will determine who gets a crack at the belt later this year.

But Mendes, the current No. 1, did nothing to lose his spot. He landed a right hand to the top of Ricardo Lamas’ head, then pounded the No. 4 contender until it was stopped at the 2:45 mark of the first round.

Should Aldo defeat McGregor, it could possibly set up a third meeting between Mendes and the champ. But Aldo won their two previous bouts – the last coming by unanimous decision at UFC 179 – so it begs the question: Is a third fight between them necessary?

“Whatever the UFC thinks I’m worthy of, I’m down,” Mendes said. 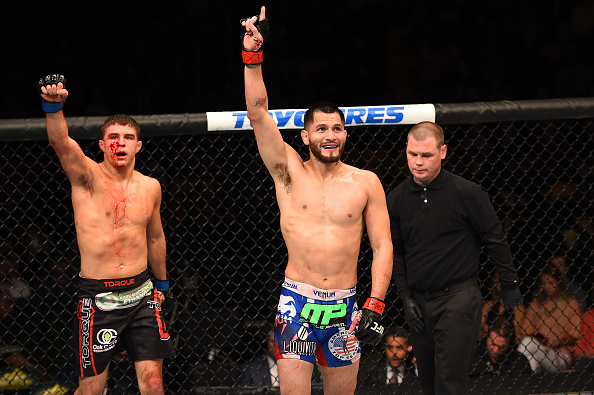 2. There seems to be a healthy dose of controversy in most UFC fight cards, and this was no different.

Lightweight Al Iaquinta scored a split decision over Jorge Masvidal in the co-main event, but the scoring from the three judges was confusing and the crowd reaction was clearly in Masvidal’s favor.

Iaquinta was a bloody mess for most of the scheduled three rounder after Masvidal opened a large gash under his opponent’s right eye, and Masvidal’s takedown defense was impressive throughout. But the judging was a head-scratcher.
> WATCH: Al Iaquinta Backstage Interview

One had Masvidal winning a unanimous decision; the other two had Iaquinta ahead 29-28. That kind of discrepancy in scoring is difficult to understand, and it’s why fighters prefer not to leave it in judges’ hands.

“I feel like I showed a lot of heart,” Iaquinta said afterward. “I pushed through a tough first round. … I feel like he coasted those last two rounds.” 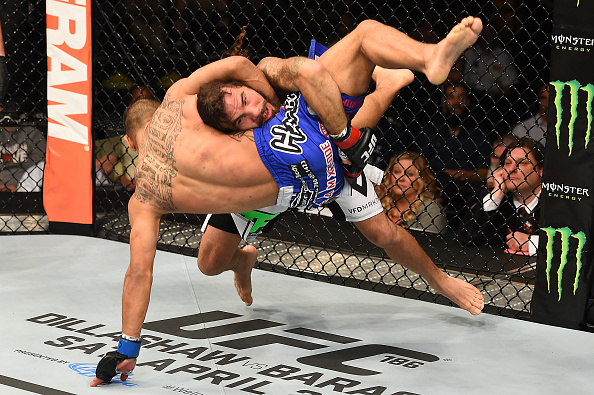 3. Clay Guida must have been feeling particularly giddy after his unanimous three-round decision over Robbie Peralta. Why else would he call out President Obama and newly crowed lightweight champ Rafael dos Anjos in one long post-fight diatribe?

Well, maybe he didn’t exactly call out Obama, but he did tell the President to pay some notice to the UFC and college wrestling if he wasn’t too busy on the golf course. And he told dos Anjos, “Don’t forget about that guy who gave you those two metal things, man, that piece of titanium in your jaw. Don’t forget where it came from. You’re holding on to my strap.”

Guida beat dos Anjos by submission in 2010, but maybe there’s a more appealing fight out there. Obama will be out of a job after 2016, so if he can make weight – well, maybe not.
> WATCH: Clay Guida Backstage Interview 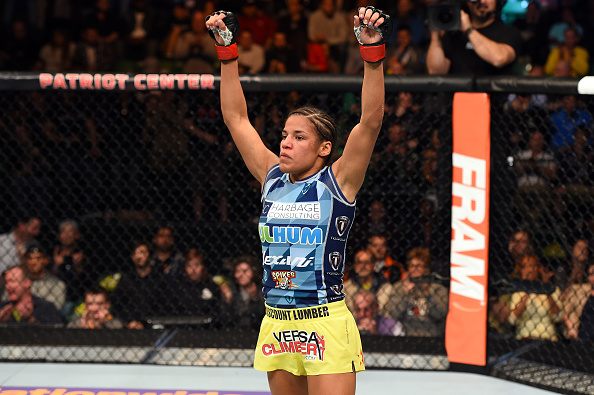 4. The last word belongs to Julianna Pena, whose return to the Octagon after more than a year off resulted in a rousing first-round TKO of Milana Dudieva.

Pena’s triumphant comeback following a knee injury will undoubtedly put her in the bantamweight title picture. She was so thrilled to win a $50,000 performance bonus that she had to hold back tears in the post-fight press conference.

Afterward, a reporter asked – hypothetically, of course – how she would react if Bethe Correia, who is scheduled to fight champion Ronda Rousey in August, suddenly had to bow out.

“I believe that if somebody knocked on my door and wanted to get in a fist fight tomorrow morning that either I know how to fight or I don't,” she answered. “So I know how to fight, and yeah, I would if that was the scenario.”
> WATCH: Julianna Pena Backstage Interview