UFC.com editorial director Thomas Gerbasi, who has covered the sport since 2000 and has authored the official UFC encyclopedia, gives his take in the aftermath of Fight Night Fairfax. 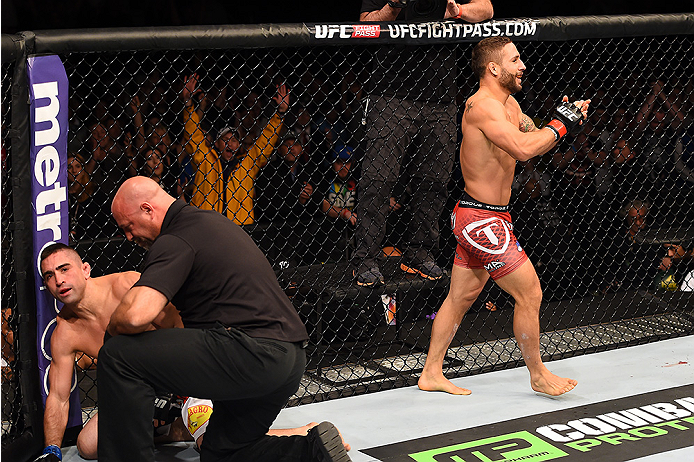 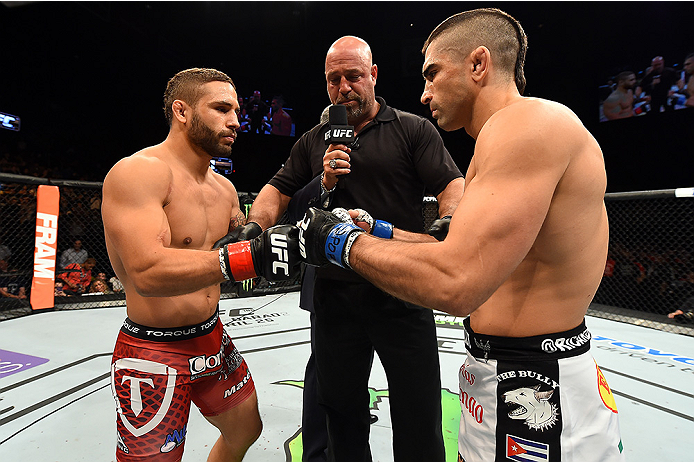 That’s the record of number one featherweight contender Chad Mendes after his first round knockout of Ricardo Lamas last Saturday in Fairfax, Virginia. That would be fine in most instances if not for the fact that Aldo still holds the 145-pound title and Mendes has few other high-profile names to beat in order to demand another crack at the belt.

So what does “Money” have to do now? For the moment, he must wait. Aldo faces Conor McGregor in July and Frankie Edgar faces Mendes’ teammate Urijah Faber in May. Those fights will determine what’s next for the Californian. If McGregor upsets Aldo, that’s probably the best case scenario for Mendes, as he will likely get the first shot at the new champ over the winner of Edgar-Faber due to the existing heat between the two.
> READ: More Fight Night Fairfax Analysis - Talking Points

If Aldo wins, a rematch with Edgar might be next if “The Answer” gets past Faber. A win by Faber in May could keep “The California Kid” at 145 pounds, but will he get a second fight with Aldo over Mendes?

That’s a long shot. And truth be told, after their thrilling 2014 rematch, what fight fan wouldn’t want to see Aldo-Mendes III, and at this point, who outside of Edgar has a legitimate claim to a shot at the belt?
> WATCH: Chad Mendes Backstage Interview | Octagon Interview 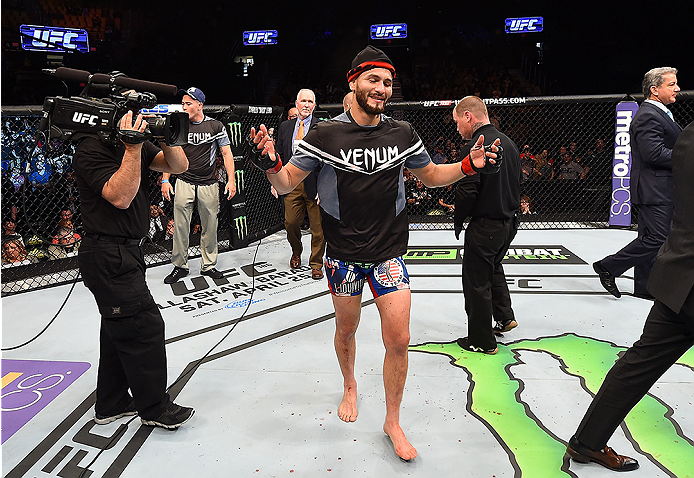 Jorge Masvidal is a helluva fighter. He has been throughout his career. You can look at his resume, and if close decision losses to Gilbert Melendez and Rustam Khabilov went the other way, he could have been undefeated for four years heading into Saturday’s bout against Al Iaquinta.

The problem with Masvidal is that he knows how good he is, so he often fights as if he can turn it on when he wants to and sometimes, that costs him. Late in the first round against Iaquinta, he turned it on and almost stopped the New Yorker.

If Masvidal put the pressure on early in round two, he could have ended the fight right there. He didn’t. Instead, he took his foot off the gas, settled into a counterpunching stance and lost the next two rounds on two judges’ scorecards, costing him the fight. Was it close? Yes. Could it have gone either way?
> WATCH: Fight Night Fairfax Post Fight Press Conference Highlights

Yes. But Masvidal shouldn’t complain about the decision when he left the fight on the table for Iaquinta to steal, and in my eyes, the aggressive and gritty prospect did just that. 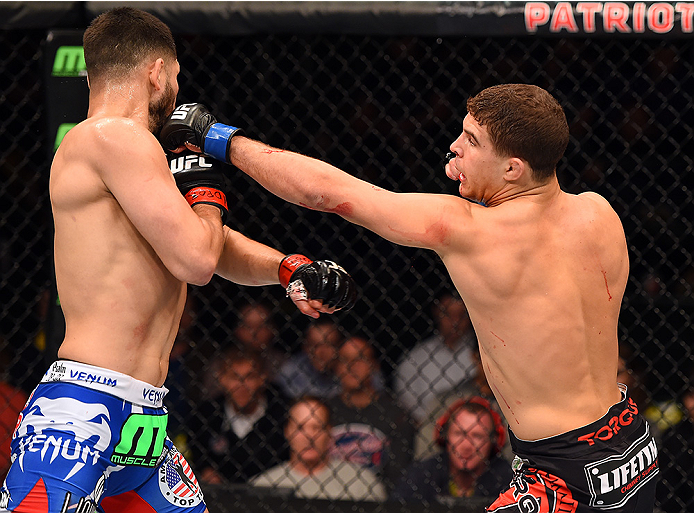 While much of the focus on Iaquinta this Monday is on his post-fight interview, one which he stormed away from after fans booed his decision win over Masvidal, let’s look at the fight first, and a gutsy effort from a fighter who nearly got finished in the opening round.

After getting rocked, dropped and cut by Masvidal, Iaquinta could have checked out and played it safe for the next two rounds, content to lose the fight but go the distance. He didn’t. Instead, he pushed the action, fought like he wanted it, and he got the result he wanted. As for his post-fight reaction, good for him.

It shows just how seriously Iaquinta takes his sport and his livelihood. Emotion is never a bad thing, and I will always want to see a fighter who cares more than one who is simply doing this for a paycheck.
> WATCH: Al Iaquinta Backstage Interview | Octagon Interview 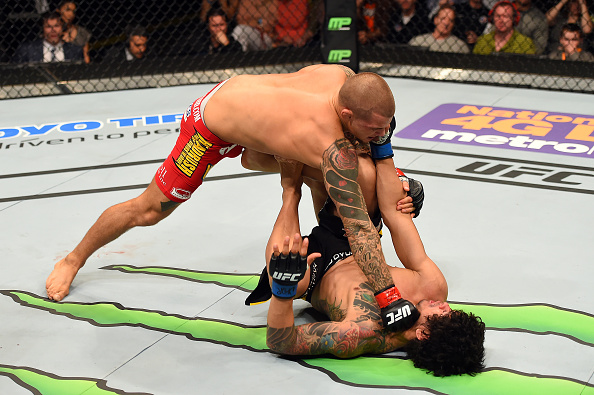 In addition to Iaquinta-Masvidal, the lightweight division was well-represented in Fairfax, with Dustin Poirier, Michael Chiesa and Alexander Yakovlev all scoring big victories. I’ll even include featherweight Clay Guida in here because after beating Rafael dos Anjos and Anthony Pettis, the last two men to hold the UFC lightweight belt, his 145-pound win over Robbie Peralta may be a prelude to a return home to 155 pounds.

We’ll have to see about that, but as for the others, Poirier, a former featherweight contender himself, looked as good as he ever has in dispatching a tough Diego Ferreira in his first lightweight bout since 2010, and “The Diamond” is fired up to make a run at the belt, probably sooner rather than later...Cool, calm and collected, Chiesa bounced back from his loss against Joe Lauzon with a hard-fought win over Canada’s Mitch Clarke.

It was a solid victory for “Maverick,” who held off a late rally from the Canadian to lock up the win…Russia’s Yakovlev got a huge boost in his first bout at 155 pounds after moving down from welterweight, as he upset veteran Gray Maynard. It wasn’t a spectacular win, but an important one for Yakovlev.

As for Maynard, four consecutive losses will likely result in some serious talks between the former world title challenger and his family and team.

VICTORY FOR THE VENEZUELAN VIXEN 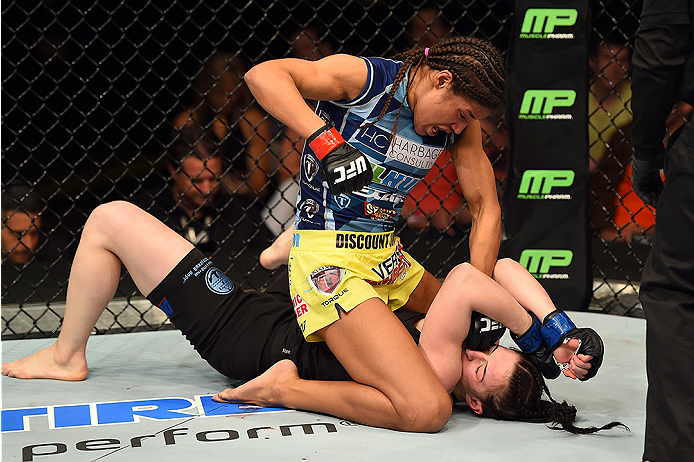 There was an enormous amount of pressure on the shoulders of Julianna Pena before her Saturday bout against Milana Dudieva. She was returning from knee surgery to fight for the first time since November of 2013, she was expected to be spectacular as an Ultimate Fighter winner, and fans wanted her to emerge as a legitimate threat to champion Ronda Rousey in a division in need of challengers.

I’d say on most parts, yes. She stopped a tough foe in the first round, impressively at that, and there were no ill effects from the layoff or the injury.

As for being a legitimate threat to Rousey?

She will likely need a couple more fights against top ten competition to earn that right, and that may be all it takes to get her a shot at the queen of the division. Should be a fun year for Ms. Pena.