Experts figured that if Valentina Shevchenko were to beat Julianna Pena, it would happen standing up. But the surging Kyrgyzstan native had some tricks up her sleeve.

Shevchenko submitted Pena with an armbar that bent “The Venezuelan Vixen’s” elbow to the point of near rupture to capture her third-straight win in a wide-open women’s bantamweight division.

Pena gave respect to “The Bullet” ahead of their contest, expressing appreciation for Shevchenko’s skills in the stand up. But in the game of mixed martial arts, it’s often the well-rounded combatant who ends up with her hand raised.

“I’m not only a striker like people said; I’m a complete MMA fighter,” Shevchenko said. “(Julianna) is a good fighter, she’s wild. But I’m a master.”

It was certainly a masterful performance by Shevchenko, who, despite having an extensive background in Muay Thai, has been competing in MMA since the early 2000s. Her depth as a fighter makes her one of the most dangerous threats to Amanda Nunes’ title reign.

These are the Fight Night Denver Talking Points 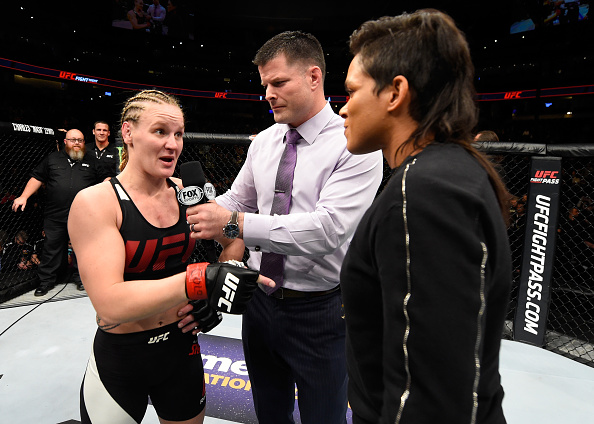 Another shot at the champion for the Bullet

After Shevchenko pulled a rabbit out her hat against Pena, Nunes stepped into the Octagon to stand face-to-face with her next opponent.

With the win, Shevchenko earned another crack at Nunes, who beat her in March to earn the title shot that led to the start of her own championship reign.

The two shared a polite, yet direct, moment when discussing their upcoming rematch. Shevchenko said she is excited to take Nunes’ belt, but the champion rebuffed her with a promise to finish the challenger.

Whenever the two top bantamweights collide, it’s almost a guarantee that it will be an amazing fight. Shevchenko has been clamoring for a second chance against Nunes.

“Amanda won not because she was stronger than me but because I give her a little bit reason to take the victory,” Shevchenko said. “I know I will do my best to take this belt from her.”

The talk of the town in the Mile High city all week was Francis Ngannou. Perhaps the biggest and most threatening heavyweight to ever emerge in the UFC, Ngannou has been on a demolition campaign since debuting in late 2015.

UFC president Dana White has been singing Ngannou’s praises, and the “Predator” proved the boss has the keen eye for talent he’s shown for over a decade running the UFC.

Ngannou extended his finish/win streak to five with a first-round thumping of heavyweight legend Andrei Arlovski. Ngannou cracked the former champion with a counter right hook while he was stepping back, out of the way of a charging “Pit Bull.”

The power and championship potential make Ngannou a fighter to watch as he makes his trek up the heavyweight ranks. And it’s only the start of the journey.

“I think I start to have the experience in the UFC and I’m very confident and very relaxed,” Ngannou said. “I am able to understand what my team tells me to do and this time is only the beginning.” 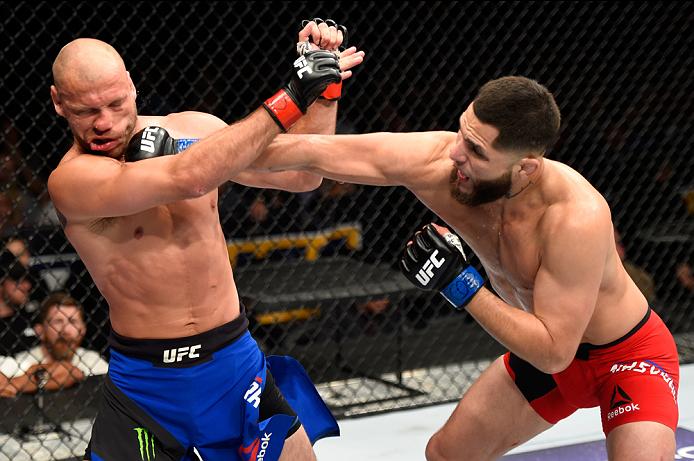 Masvidal makes most of moment

The knock on Jorge Masvidal for years has been that he doesn’t always pull the trigger and go for the kill when he has opponents in a bad way.

“Gamebred” has heard the critiques and decided that he was going to turn up the aggression against Donald Cerrone in the highest profile fight of his career.

What followed was a complete domination of Cowboy, arguably the hottest fighter in the UFC’s stacked welterweight division.

“Sometimes I drop dudes and I smile at them after I drop them,” Masvidal said. “I felt like knocking him out because I didn’t want to go to decision. So, I pulled the trigger every chance I got. Sometimes in the past I’ve been on cruise control because I was kicking a guy’s ass so bad. But I can pull the trigger when it needs to be pulled.”

Masvidal now stands as one of the most formidable contenders in a division that’s quickly gaining contenders for the opportunity that follows for the winner of Tyron Woodley and Stephen Thompson after UFC 209.