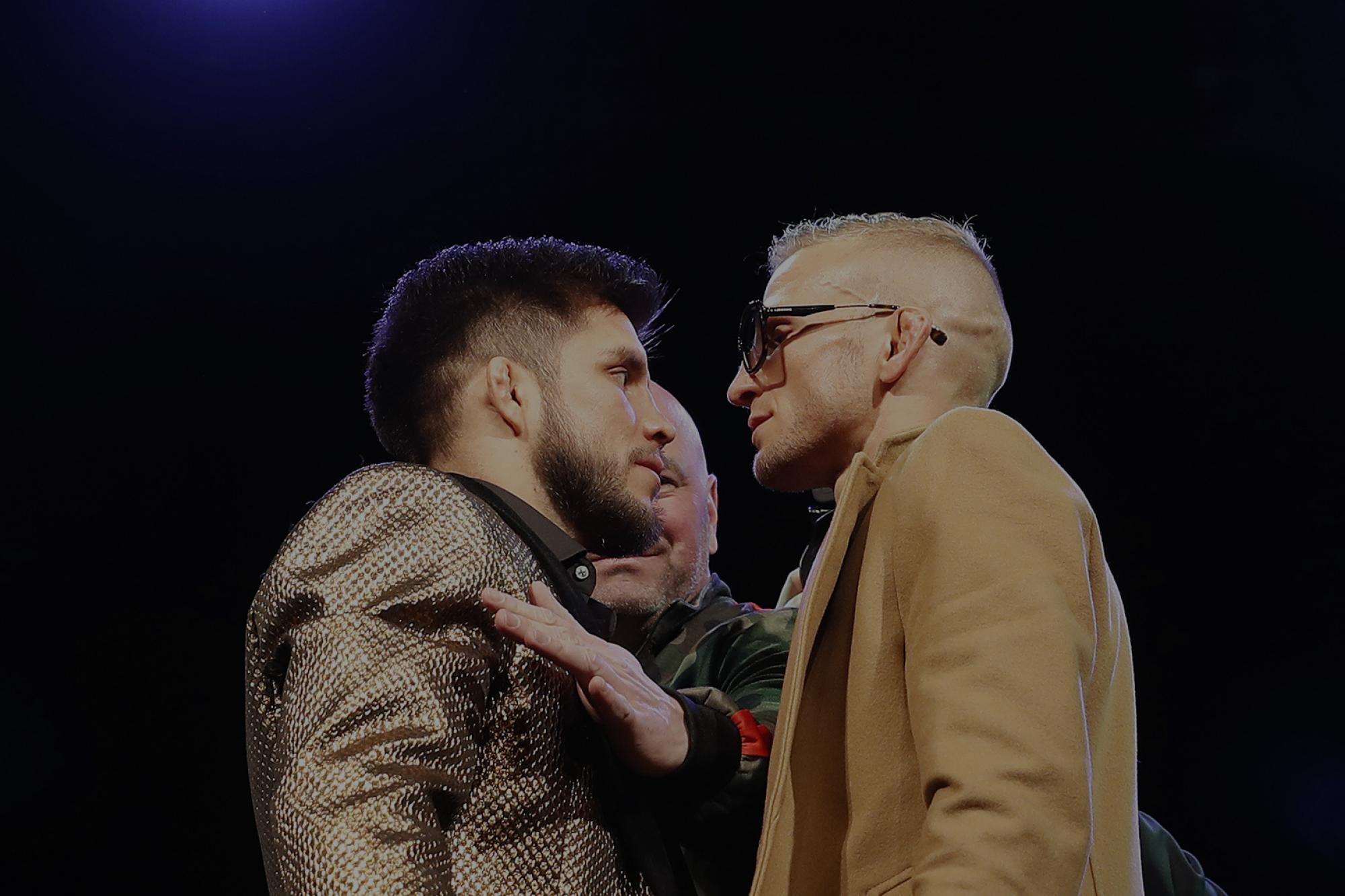 With designs on being the first UFC champion to hold 3 championship belts, TJ DIllashaw first had to claim two of them. The task, of course, was hardly a small one. In addition to dropping an extra ten pounds to get to the flyweight limit, he also had to take on Olympic wrestling medalist Henry Cejudo, who was last seen dethroning the GOAT, Demetrious Johnson, back in August.

Cejudo had fought too long and hard to get that belt, however, and he wasn’t about to relinquish it so soon. When Dillashaw got caught in the early going, Cejduo never allowed him to get fully back to his feet, unleashing a typhoon of punches that rocked the bantamweight champ from all sides.

With the successful defense of the flyweight title, Henry Cejduo is the first UFC athlete to wrap the newly designed championship belt around his waist.

Former NFL player Greg Hardy looked impressive enough  in his developmental MMA fights and found himself booked against the most experienced opponent of his short career when he met Allen Crowder for his UFC debut.

Hardy came out fast and aggressive as he had in the past, but had little answer for Crowder’s successful takedown. When he finally got back to his feet, the round was nearly over, and Hardy had been taken past the first round for the first time in his career.

Hardy had lost a step and appeared visibly tired from the first round, and Crowder marched him down, throwing jabs and taunting Hardy for not engaging. A frustrated Hardy dropped Crowder, and proceeded to hit him with an illegal knee while he was grounded and handing Crowder the DQ victory.

What Is ESPN+ And How Do You Watch? Click Here For More Info.

Another of the evening’s fighters making a return to lightweight from welterweight, Yancy Medeiros drew one of the toughest finish artists in the division in New York’s Gregor Gillespie.

Gillespie went right to work in the clinch, limiting the Hawaiin’s options, and while Medeiros gamely reversed several takedowns and takedown attempts, he had little time to counter offensively in the first round.

Similarly went the second round, with Gillespie hanging on Medeiros’ back like a yoke, sapping his opponent’s energy and leaving him unable to answer. Gillespie eventually worked his position to unload some ground and pound until the referee stepped in to stop it with a mere one second remaining on the clock.

Two veteran flyweights knocking on the door of title contention, Joseph Benavidez and Dustin Ortiz collided in a rematch four years in the making.

Both working at breakneck speed, they took turns clipping each other in the first round until Benavidez dropped Ortiz with an overhand left and controlled him from the top until the horn.

Round two was more high-energy back and forth, with Ortiz doing his level-best to avoid Benavidez’s takedowns until he scored his own late in the round, almost securing a choke.

Benavidez tried to quell Ortiz’s pressure with an extended takedown in the third. If he didn’t inflict a ton of damage, he did seize control of the fight from which his opponent had no time to recover.

Paige VanZant returned to the Octagon a year after breaking her arm in St. Louis and needing several surgeries to fix it. She drew TUF alum Rachael Ostovich, triumphantly looking to put recent (and very public) domestic abuse challenges behind her by keeping this bout booked for Brooklyn.

With mutual respect and sportsmanship all around, the fighters came out swinging and kicking before Ostovich scored a takedown and started taking control of the fight from the top. After getting stood up by the ref, Ostovich clipped VanZant with a jab and immediately scored a second takedown, smothering her opponent with success until the round ended.

In the second it was PVZ’s turn to wrest control, reversing position on the Hawaiian’s takedown, hitting her with some ground-and-pound when she gave up her back, and ultimately getting Ostovich to tap on an armbar.

With the win, VanZant chalks up her first win in the women’s flyweight division.

The sixth DWTNCS fighter of the night, Karl Roberson moved up to light heavyweight for the chance to take on the always-dangerous vet Glover Teixeira and catapult his career to the next strata.

In the early going it looked like that would be the immediate outcome, and Roberson used Teixeira’s takedown attempt to get himself into position for some brutal fists and elbows from the top position.

But like the UFC legend that he is, Teixeira remained calm, reversed position and put on a clinical demonstration of how to execute an arm triangle. To quote the winner:

With his submission, Teixeira is second only to Jon Jones all-time in light heavyweight finishes.

In his move from welterweight back down to lightweight, veteran Cerrone drew one of 2018’s most popular newcomers, Alex Hernandez.

A festival of fists from the opening bell, the entire story of the first round was the accuracy of Cerrone’s striking. Hernandez got off a few punishing jabs, but paid the price in head-strikes in return, wearing the damage on his bloodied face.

More of the same for the second round, where Hernandez’s grit and athleticism were countered with power and timing. When a body kick dropped Alex to the mat, vintage Cerrone moved in for the finish, pummeling “The Great” with hammer fists on the way to a TKO victory and another idyllic moment in the Octagon with his infant son and family.

Following the win, Cowboy called out Conor McGregor or “anyone in the Top 5.”

Scotland’s Joanne Calderwood has found new life at flyweight since relocating her camp to Syndicate in Las Vegas and incorporating a fierce jiu-jitsu game into her toolbox. But they don’t call newcomer Ariane Lipski the Violence Queen for nothing, and she unloaded her trademark combinations as soon as Claderwood was in range at the opening bell.

Calderwood slowed Lipski’s roll against the fence, and scored a takedown where she went to work from the top, controlling, punching and gassing Lipski while nearly securing a rear naked choke and later, an armbar.

Lipski attempted to make up ground in the second with her trademark aggressive striking, but Calderwood was ready with some well-timed counters, and controlled Lipski’s distance with come effective front-kicks.

Two minutes into the third round, Lipski found some momentum with a successful takedown and a strong top position, but even then, Calderwood slid into position for a potential armbar, and while the submission never manifested, Calderwood’s domination and poise throughout made it the easiest decision of the evening to that point.

In a testament to how much exciting new talent has arrived via Dana White’s Tuesday Night Contender Series, Alonzo Menifield and Vincius Moreira both found their way to the UFC through the show. Menifield arrived in Brooklyn a perfect 7-0, and similarly Moreira was looking to protect a five-fight streak.

Throwing huge haymakers at the opening bell, Menifield dropped Moreira with seeming ease and delivered some happer fists until the Vincius calmly returned to his feet, looking relaticely unfazed.

After some strong clinch attempts from Moreira against the fence, Menifield caught him with a straight right after a failed back-fist attempt, sending him to the mat where the referee stepped in to stop Menifield’s final flurry of fists. Alonzo remains perfect as a professional.

Late replacement or no, Bautista has never been an easy out, and while the fight didn’t make it out of the first round, Bautista still gave Sandhagen a puzzle to solve. Reversing position on the mat several times before Cory was able to stabilize and secure the armbar.

With three fights and three finishes in the UFC, Sandhagen continues to make his case for a shot at the bantamweight elite.

In the back and forth first round, each fighter took turns exposing one another, with Edwards dropping Bermudez several times, only to later find himself on his back looking up at Bermudez’s elbows. The second round began almost where the first ended, with Edwards magically eluding what seemed to be a certain armbar by Bermudez. Although he didn’t secure it, Bermudez dominated in control time.

Sensing his opponent was exhausted in the third, Bermudez kept the ground pressure one, delivering more elbows and punches from the top when Edwards gave up his back. It was a must-win for The Menace, and he did precisely that, giving Edwards nowhere to run.

Only one man would emerge with an unbroken streak intact. The man who dealt Rencountre his first UFC loss, Belal Muhammed, rode a four-fight winning streak into Saturday night, as did his opponent, DTWNCS alum Geoff Neal.

After some brief hesitation in the early-going, both men found an avenue for some jabs, with Neal getting more damage for his dollar, and bloodying the face of Muhammed. Neal’s edge in size advantage helped him land some fiery combinations in the second, and slip Muhammed’s takedown attempts. Muhammed landed some brutal uppercuts to the liver area that sent Neal back on more than one occasion, but Neal responded with another flurry of combos as time expired in the second round.

Neal carried this momentum into the third, firing off jab after jab, including one that sent Muhammed to the canvas and came within a breath of ending the fight by TKO. Muhammed survived and fought valiantly to the final bell, but by then, Neal had already put in the work, and emerged with the five-fight streak intact.

Late-notice newcomer and former Marine Kyle Stewart didn’t get awarded a UFC contract following his win on Dana White’s Tuesday Night Contender Series, but his patience and persistence paid off and he not only got the contract, but also this historical distinction, along with his opponent Chance Rencountre, to be the first fight ever to air on the ESPN+ platform.

After a jittery start that was immediately paused when Stewart delivered inadvertent groin kick, Rencountre responded with some mean clinch work against the cage, grinding him steadily to the ground until he was able to get his hooks in and secure the rear naked choke. With the first round finish, Oklahoman Chase Rencountre becomes the first winner in the UFC + ESPN era.