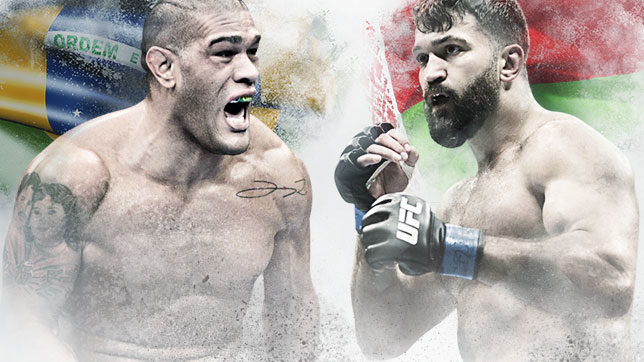 The UFC lands in Brasilia, Brazil this weekend for a UFC Fight Night card topped by heavyweights Antonio “Bigfoot” Silva and Andrei Arlovski in a rematch of a bout the pair had in 2010 while under the Strikeforce banner.

Silva won that night in the midst of a downturn for Arlovski at the time, but the Belarus native has found new life lately with three wins in a row, including one in his return to the UFC in June.

Also on the card, Gleison Tibau will look for his 15th career win in the UFC when he takes on Polish powerhouse Piotr Hallman in a battle of two tough lightweights.

The card features several high-profile bouts, including the debut of undefeated bantamweight prospect Larissa Pacheco, who takes on Jessica Andrade in her debut.

In today's fantasy preview, we're going to break down some of those featured fights on the main card to see who has what it takes to get the job done on Saturday night in Brazil and get you the leg up on the competition for the UFC Pick Em game.

The last time Antonio “Bigfoot” Silva stepped inside the Octagon he put on one of the greatest performances in heavyweight history as he took on Mark Hunt in a five-round epic for the ages.  Silva gave as good as he got and in the end the decision was rendered a draw, which seemed only fitting considering the kind of battle the two heavyweights gave each other.

This time around, Silva will look to get a definitive win while picking up a second victory over Andrei Arlovski.

When Silva first met Arlovski in 2010, he won the fight with superior striking and takedowns.  Now throughout his career, Arlovski has typically been an impossibly hard fighter to take to the ground, as he blocks over 88 percent of the takedowns attempted against him, but in the first matchup with Silva he surrendered two takedowns in five attempts.  Silva's ability to drag this to the mat if he wants the fight on the ground could play a key role in how this rematch plays out.

Silva is a physically imposing heavyweight who uses size and power to counter speed.  Arlovski will clearly have an advantage when it comes to quickness, but can he pull the trigger in this fight after spending three rounds acting gun shy in his last bout against Brendan Schaub?  Silva knows what to expect from Arlovski - a fast moving striking attack with long jabs and quick kicks.  On the other hand, Arlovski might be playing a guessing game with Silva.

Silva has powerful punching power, especially on the inside, which is where he can negate Arlovski's speed.  If he chooses to take this to the ground and gets Arlovski down, there's little the former UFC champion can do to counter, outside of working to get back to the feet.

All told, it means Silva remains a stylistically bad matchup for Arlovski, whether the fight takes place in 2010 or 2014.  Look for Silva to impose his will on Arlovski, use his 52.1 percent striking accuracy to set up his clinch game as he mauls his opponent over 25 minutes.  If there's a stoppage, chances are it happens late in the fight because Silva wears Arlovski down, round by round, until he can put him away in the third or fourth stanza.  Either way, the end comes with Silva's hand being raised.

Two tough lightweight grapplers lock horns in the co-main event when Gleison Tibau takes on Piotr Hallman.  Tibau is fresh off a win over Pat Healy in one of his best performances in recent memory, while Hallman recently submitted multi-time UFC veteran Yves Edwards.

Tibau is a massive body for the lightweight division, walking around at well over 180 pounds before a fight.  The Brazilian is a bread and butter fighter, meaning he sticks to the basics and doesn't go away from what got him to the game in the first place.  He's a decent striker, mostly relying on power shots and his 64 percent defense to stifle his opponent's offense.  The ground is where Tibau excels, as he takes opponents down over four times during every 15 minutes he's in the cage, and those statistics are staggering considering how many fights he's had in the UFC over the years.

Hallman is more well-rounded, as he strikes with good proficiency at 4.51 significant strikes landed per minute with just under 44 percent accuracy, while taking opponents to the ground 3.71 times per 15 minutes.

Hallman is going to have to deal with a lot in this fight, however, as Tibau is probably a fighter who will never be champion but certainly has the ability to make good fighters look bad.  His huge body structure makes him nearly impossible to work around in the cage, and by the time the second or third round starts, his opponents are usually worn down just trying to push Tibau against the cage or down on the mat.  Tibau is a suffocating fighter, especially if he lands on top, and chances are that's where he'll spend the majority of his time this fight.

Tibau will strike early and then look for the ground sometime most likely in the first round. Once he gets in Hallman's head that the takedown is coming, Tibau will take over with his mat work and superior clinch game to put Hallman in trouble over three rounds.  Chances are you won't see a finish here, but a unanimous decision win for Tibau is most likely the outcome.

Russell Doane is a fun prospect to watch out of Hawaii, but he's going to have his hands full this weekend taking on No. 7 ranked bantamweight Iuri Alcantara.

Alcantara is as good as they get at 135 pounds, with a nasty ground game and an underrated striking attack that's proficient but not exactly flashy.  Alcantara is extremely strong for bantamweight and with good reason, considering he was once a featherweight who can now out match 135 pounders with size and technique.

Alcantara is a very aggressive fighter, both on the mat and on the feet, so don't underestimate him anywhere in this fight.  He's the kind of fighter always going for a finish, and while Doane is tough as nails, it's going to be tough for the third-time UFC fighter to get much done while facing someone like Alcantara.

Statistically, the two fighters are extremely evenly matched.  Alcantara and Doane are almost identical in striking rate and accuracy on the feet and both go for about two takedowns per fight.  The difference that gives Alcantara an advantage comes from his incredible 83 percent takedown rate and experience against a much higher level of opponent.

Alcantara will test Doane on his feet before taking this fight to the ground where he will look to overwhelm his opponent before he knows what hit him.  Doane is super tough so he may not fade away, but either result ends with Alcantara's hand raised.  Given his tendency for finishes in the past, don't be shocked if Alcantara hurts Doane on the ground and just opens up his offense until the referee drags him off sometime in the second or third round.

If you're looking for an early pick for Fight of the Night, it might be this matchup between two bantamweight strikers, as Jessica Andrade welcomes Larissa Pacheco to the Octagon.  Both fighters are known for throwing haymakers with a lot of volume so don't blink when these two women enter the cage on Saturday night.

Andrade had a stutter step in her early UFC career, but since shaking off a loss to Liz Carmouche, the young Brazilian has looked flawless.  She's an extremely high-volume striker, landing 7.24 significant strikes per minute with almost 55 percent accuracy, which is a ridiculous number overall.  She's also got a very solid ground game with a background in Brazilian Jiu-Jitsu, although chances are she'll look for the knockout before she'll gun for the submission.

Her opponent, Larissa Pacheco, is an unpolished prospect with many of the same strengths as Andrade.  Pacheco also has a background in jiu-jitsu, but she is a much bigger fan of the knockout.  She swings wide, looping hooks that come at her opponents from both sides, which land with a lot of power, but also leave Pacheco open for strikes right up the middle.  Pacheco will have a significant height and reach advantage, so she needs to use that to set up her strikes, but in this case her wild tendencies could spell doom for the UFC newcomer against a fighter as good as Andrade.

Andrade is a surgeon with the way she targets an opponent to the head and body, systematically dismantling them from the top down.  She's overwhelming in the clinch and puts so much damage on her opponents that they rarely have a chance to react before already getting hit with four or five consecutive combinations.  Pacheco, who is now the youngest fighter on the current UFC roster at 20, is a prospect to watch and, much like Andrade in her first UFC fight, this will be a learning lesson, a rough learning lesson that will likely see Andrade winning by knockout or TKO, while providing valuable information for the future.  Hopefully if Pacheco does falter, she'll learn just like Andrade did and turn around to eventually become a top 10 bantamweight.