Fight Night Berlin Talking Points: The Reign Of The Beast 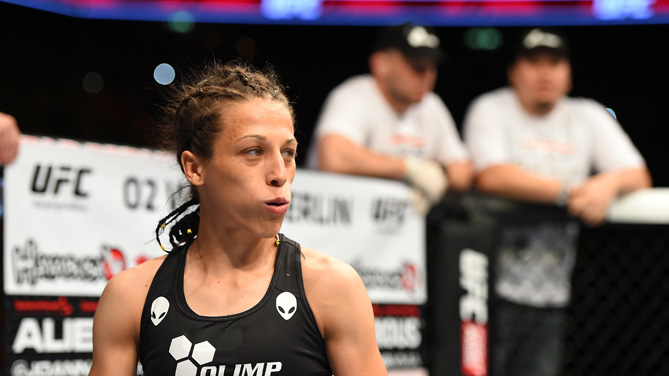 Joanna Jedrzejczyk is a stalker.

When she senses vulnerability in her opponent, she pounces. She throws knees, elbows and punches in flurries. She is relentless.

Jedrzejczyk proved again Saturday in Berlin that she’s the UFC strawweight division’s version of Ronda Rousey. With a little bit of Conor McGregor thrown in.

Today’s Talking Points are all about girl power – Joanna’s power. 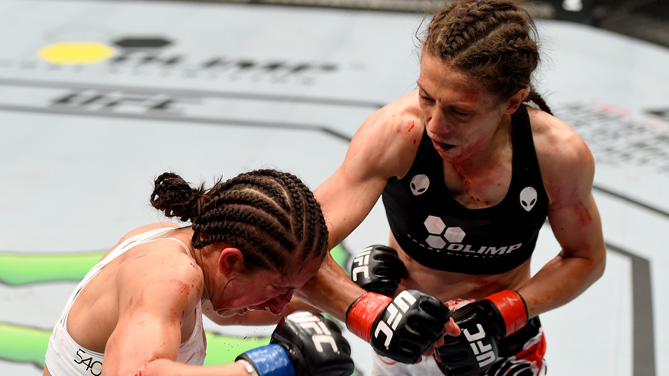 1. Jedrzejczyk’s three-round dismantling of No. 3 contender Jessica Penne follows a dominant knockout of Carla Esparza at UFC 185 in March.

She took the championship belt from Esparza, defended it against Penne and appears unbeatable in the 115-pound class, at least until a new challenger steps forward.

Asked afterward is she had an opponent in mind for her next bout, Jedrzejczyk replied, “Are they ready for me? No.”
> Watch Joanna Jedrzejczyk Octagon Interview | Backstage Interview

Up next: Most likely, it will be Claudia Gadelha of Brazil, who lost a controversial split decision to Jedrzejczyk in December 2014.

Like Rousey, Jedrzejczyk is unbeaten (10-0), with four KOs and one submission. Like McGregor, she is trash talker and a master of the psych job.

But she is also a pleasure to watch: Against Penne, she landed 126 significant strikes, and when she had Penne on the ropes, she moved in for the finish. 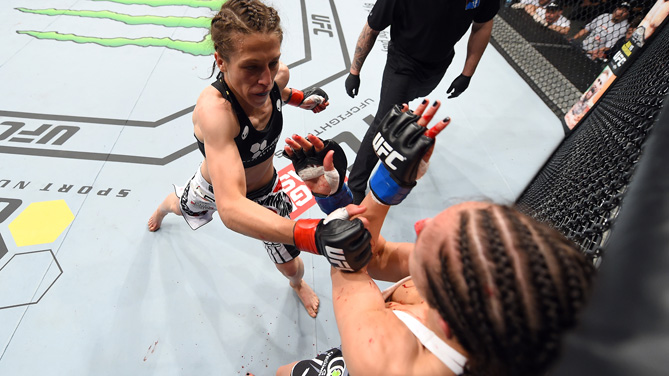 2. Penne is a Brazilian jiu jitsu black belt, but she was unsuccessful in 11 takedown attempts in this bout. That meant she was fighting Jedrzejczyk on her feet, and that’s just not an advisable game plan.

Penne (12-4) suffered a deep gash on the bridge of her nose, leaving her with a bloody face through most of the fight. She tried gamely to press Jedrzejczyk against the cage and throw knees, but she was never in control and never had a chance.

Penne absorbed one front kick to her face, as well as countless leg kicks and knees. At times, she ate no fewer than eight consecutive rights and lefts that she was powerless to stop.

When referee Marc Goddard stepped in at the 4:22 mark after Jedrzejczyk landed a knee and a right hand, Penne didn’t protest.

And the men competed, too …

3. Featherweight Tatsuya Kawajiri had a good strategy to take the fight to the ground against Dennis Siver. But he also needed patience.

Kawajiri tried continually to take down Silver in a bout between venerable 30-somethings, but the veteran German fighter, whose last fight was a knockout loss to McGregor in January, resisted. Finally, he went down.

From there, Kawajiri had control for more than eight minutes as Siver tried to get to his feet. Silver almost had a couple of guillotine chokeholds, but both times Kawajiri slipped free.

Kawajiri won a unanimous decision by 29-28 scores, but give Siver his due. He landed 90 total strikes in a fight between two admired MMA icons. Between them, they had entered the Octagon with a combined 76 total bouts.