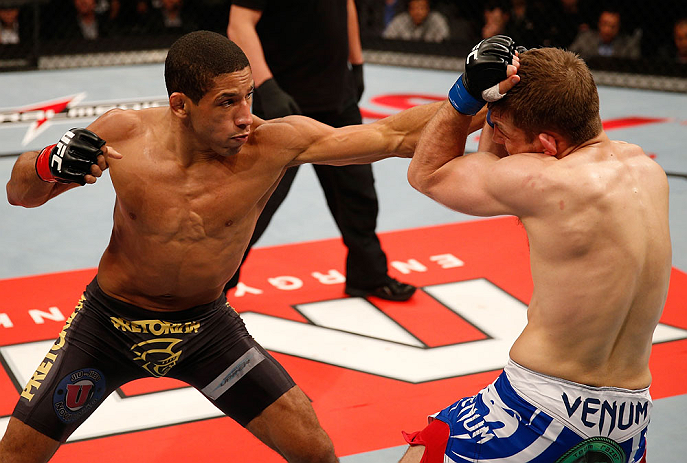 The UFC's final trip to Brazil in 2014 goes down this Saturday night and the preliminary card will feature a number of local fighters looking to make an impact in front of a home country crowd.

At the top of the list is former Ultimate Fighter Brazil contestant Marcos Rogerio de Lima, who made short work of his former castmate Richardson Moreira to win his UFC debut. He faces veteran fighter Igor Pokrajac, who returns to action for the first time in over a year this weekend.

Also on the card, No. 13 ranked featherweight Darren Elkins faces a tough test in his trip to Brazil as he takes on Nova Uniao fighter Hacran Dias.

In today's fantasy preview we will examine some of the key fights on the prelims to see who will walk away with a win, who goes home with a loss, and the difference it could make to the final UFC Pick Em game of the year.

Marcos Rogerio de Lima wasted no time in his UFC debut, winning by knockout in just 20 seconds, which sets up a very interesting matchup for his second fight as he takes on multi-time UFC veteran Igor Pokrajac.

Pokrajac has been out of action for over a year and hasn't won a fight in the UFC since 2012. The Croatian has faced plenty of ups and downs during his career, but he's still a dangerous fighter, especially now that he's backed into a corner, desperate for a win. Pokrajac possesses heavy hands and dangerous feet, plus an underrated ground game where he's shown proficiency in the past.

Still, it's a hard road to walk with this fight, facing a massive middleweight like de Lima. As a former light heavyweight, de Lima held his own with power punchers like Mike Kyle before making the wise move down to 205. Now he's smashing opponents with the same kind of strength he faced when he took on people that clearly outweighed him on fight night. De Lima is fast and powerful and unrelenting when he finds an opening. Pokrajac only showcases just over 42 percent striking defense, which could spell disaster in this fight.

De Lima can't top his last finish but he can match it with another impressive win on Saturday night and he should get the job done against an aging Pokrajac, who will barely get the chance to shake off the ring rust before a big Brazilian is swinging at his head.

Prediction: Marcos Rogerio de Lima by knockout, round one

The UFC is certainly testing Hacran Dias and his ability to fight off a physically strong wrestler after dropping back-to-back fights to Nik Lentz and Ricardo Lamas, who were both able to stymie his attacks by feeding him a grappling-heavy dose of clinch work and takedowns. This time around he gets Darren Elkins, who employed a similar strategy in his last fight to beat Lucas Martins in Brazil as well.

Elkins definitely doesn't have the best wrestling in the division - he only lands about two takedowns per fight and only lands with 25 percent accuracy - but what those stats don't show is his unrelenting pace and tenacity to pressure opponents and work them over against the cage. Elkins has no problem embracing the grind and mashing Dias against the fence over and over again.

The key comes down to Dias either learning from his last two fights or proving that a great American wrestler will always be his kryptonite. The hard part about this for Dias is away from wrestlers, he's been a real prospect in his other fights. Dias is a training partner of UFC featherweight champion Jose Aldo and former bantamweight champ Renan Barao and he possesses some equally dangerous strikes and submissions if he ever breaks free to ply his craft.

Unfortunately, the book is out on Dias, and as long as Elkins doesn't deviate from the script and start taking unnecessary chances, he should be able to repeat what Lentz and Lamas did when they fought the Brazilian as well.

The prospect watch is high in this fight as Japanese fighter Ulka Sasaki makes his second appearance in the UFC after an ultra impressive debut where he choked out former Ultimate Fighter competitor Roland Delorme just one minute and six seconds into the first round. Sasaki might be the next major star from Japan as the UFC continues to expand into Asia, so he's a name to watch and he should put on a show Saturday night.

At 25 years of age, Sasaki is mature enough to handle fighting in Brazil against a hostile crowd, and his style could give Issa some serious problems from the opening bell until the final horn. Sasaki is a big bantamweight, walking around at 5'10" tall and carrying a large frame for his body. He's a patient fighter, but once he sees an opening there's no stopping him from going for the finish. Whether it's knockout or submission, Sasaki is never looking for the judges to get involved.

Issa comes from a strong grappling background as well, so he won't just fade if this fight hits the mat. The majority of the Brazilian's wins have come on the ground so he might invite a grappling battle with Sasaki.

The transitions in this fight might be the real joy to watch - think about Charles Oliveira vs. Hatsu Hioki in terms of styles - but ultimately Sasaki is just the better overall fighter. He's lightning quick, punishing on top and doesn’t relent from the moment the fight starts until it's over. Sasaki has surely benefitted from the time he also spent working with the wrestlers at Team Alpha Male, so look for him to be the aggressor in getting this fight to the mat while Issa tries to play defense for 15 minutes.

Prediction: Ulka Sasaki by submission, round 2

The welterweight matchup between former Ultimate Fighter Brazil finalist Marcio Alexandre and fierce striker Tim Means could be an early candidate for Fight of the Night. These two fighters both like to strike, hit with power and don't back down at the first sign of trouble.

Alexandre gets his nickname “Lyoto” because his style mimics that of former UFC light heavyweight champion Lyoto Machida. Alexandre likes to work from the outside with quick, fast punches and also has no problem throwing a variety of kicks at his opponents. Means will certainly welcome a stand-up war after having so many past opponents just try to put him on his back.

Means hits very hard and has explosive knees and elbows on the inside. He comes from the same camp that once produced former interim welterweight champion Carlos Condit, so expect a similar style performance, although Means isn't as dynamic as his counterpart from New Mexico.

Means will have a reach advantage in this fight, but he somehow always ends up closing in on his opponents when he starts throwing a barrage of strikes. He may tag Alexandre with a couple good jabs from the outside, but he'll inevitably push forward with a big knee or possibly short elbows to inflict damage. What Means has to be careful about in this fight is not to start chasing Alexandre because just like Lyoto Machida, the Brazilian feeds on counter punching an opponent.

Means will have the power and size advantage while Alexandre will have the speed and footwork. It really comes down to a battle of inches in the trench and winning exchanges. There's more proof that Means can do those things over three rounds so he gets the edge, although it's a very, very slight edge. Alexandre could absolutely find a way to out work Means for 15 minutes, so don't sleep on him, but if he catches a knee to the body or a big shot to the head from the American it could be all over.