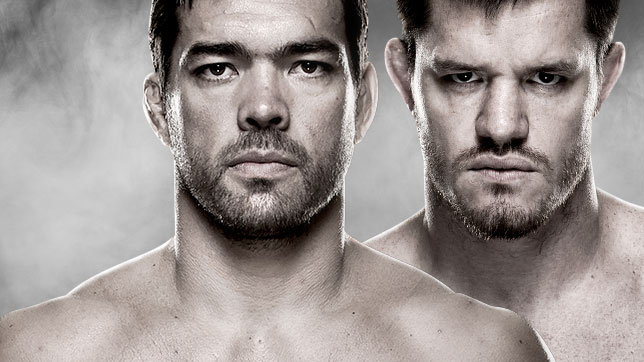 The final UFC card of 2014 takes place with a trip to Brazil this weekend, as former light heavyweight champion Lyoto Machida takes on CB Dollaway in the main event.

Machida returns after losing a decision to middleweight champ Chris Weidman in July while Dollaway has won four out of his last five fights as he makes his first career push into the top 10 of the division.

The UFC Fight Night card will also see the return of former bantamweight champion Renan Barao to the Octagon following a weight cutting disaster that cost him a shot at regaining the title back in August. He's facing upstart Canadian Mitch Gagnon in a pivotal matchup at 135 pounds.

In today's fantasy preview, we'll examine a few of the fights on the main card from Brazil to see who's got the advantage and if there's an upset brewing in any of the big fights Saturday night.

There are long odds on Dollaway going into Brazil and picking up a win over Machida this weekend, but there are reasons to believe he can get the job done.

First of all, he comes from the same pedigree of fighters that have traditionally given Machida problems in the past. While there aren't many losses on Machida's record, three out of the five defeats have come from high level wrestlers: Jon Jones, Phil Davis and Chris Weidman. Dollaway is a former All-American wrestler from Arizona State, where he was on the same team as future Ultimate Fighter winner Ryan Bader and current UFC heavyweight champion Cain Velasquez. He's also transformed into one of the best wrestlers in the UFC, with 54.7 percent accuracy and averaging nearly four takedowns per 15 minutes in the cage.

It's the ability to make Machida guess that could earn Dollaway a victory on Saturday night. Typically, Machida is the puzzle opponents struggle to put together and by the time they do the fight is already over. The former champion is confusing thanks to a karate style that often results in 'point striking,' where he'll tag an opponent with quick, rapid fire combinations while circling away before any counter can land. He's incredibly accurate as well, landing over 53 percent of his shots. Machida has also stopped many of the takedowns attempted against him, which results in just over 77 percent defense.

Machida's been here before and he knows what it's like to go five hard rounds. He knows how to stop a wrestler's best takedown, and on the feet he's clearly the better striker. For Dollaway to win he has to show extreme confidence in his skills and be willing to make this a dirty, grinding fight where he gives Machida no space to operate. If he can do that, Dollaway's got a shot. Otherwise, it's another Machida win.

Prediction: Lyoto Machida by TKO, round 4

Former bantamweight champion Renan Barao wants to climb back into the title picture, but to get there he has to go through Canadian fighter Mitch Gagnon, who comes into the fight with the biggest odds against him of any competitor on the main card.

Gagnon is a well-known submission specialist with the shortest average fight time among active bantamweights. He's a defensive wizard in the cage with the second highest takedown defense in the division, as well as the second fewest strikes absorbed per minute of anyone in bantamweight history. Gagnon also has an 'X' factor on his side that can't be counted by statistics or record.

He has nothing to lose.

No one is picking Gagnon to win this fight except maybe his teammates, friends and family. Gagnon has a chance to rocket to the top of the contender's list with a win and even though he's stepping into hostile territory to fight Barao in his home country, he just needs to focus on the task at hand and mute everything else around him. Easier said than done, but Gagnon has a rare opportunity to show something big in this fight, even if he doesn't come out on top.

The pressure is on Barao this time around. He missed weight for his last bout, which cost him a main event title fight and a chance to reclaim the belt he lost to T.J. Dillashaw months earlier. Barao already knows he's not getting the next crack at the title even with a win, but coming out and putting away a youngster like Gagnon is paramount to being invited back to another championship bout. Barao is a buzzsaw when he's on his game as he has fluid, devastating striking and a world-class ground game.

Unless Barao has just somehow talked himself out of winning this fight, he should make short work of Gagnon and then hope for a top five opponent to face in 2015 so he can get a shot at winning the UFC bantamweight title for a second time.

Prediction: Renan Barao by knockout, round one

If there's a potential upset brewing on the UFC Fight Night card from Brazil it might be this matchup between Ultimate Fighter Brazil winner Antonio Carlos Junior and light heavyweight prospect Patrick Cummins.

On paper Cummins does have a few advantages over Carlos, most notably his wrestling background, where he's a former All-American from Penn State. Cummins has averaged over eight takedowns per fight in his UFC career with 52 percent accuracy, so he's very adept at putting opponents on their backs early and often during the fight. Cummins is a very active striker as well, although most of his punches happen on the mat once he gets the takedown.

This is where Antonio Carlos Junior's background in Brazilian Jiu-Jitsu starts to come in very handy. He's a world-class grappler along with teammate Marcos Buchecha, who is currently regarded as the best submission specialist in the world. Carlos has also worked tirelessly on his striking at Nova Uniao in Brazil, which means for this camp he was probably sparring multiple rounds with former heavyweight champion Junior Dos Santos, who recently began working full-time at the same gym.

Carlos is no slouch with takedowns either after landing a slew of them in his debut fight to win The Ultimate Fighter. Cummins is definitely the better wrestler, but is going to the ground with one of the highest-level submission artists in the UFC a good idea? Carlos is masterful with his technique as well as his sweeps, which could set up any number of reversals or submission attempts. Add to that the fact that the Brazilian crowd will be in a feeding frenzy for another local favorite to get a win and it all adds up to Carlos being a good pick to pull the upset.

Erick Silva is back after one of the best fights of 2014, when he took on top five-ranked welterweight Matt Brown. Silva lost by knockout, but not before nearly finishing Brown in the opening round of what turned out to be an ultra exciting fight. He faces Duke Roufus student Mike Rhodes in a fight that should feature some pretty high-level striking between two solid standup artists.

Silva hits as hard as anyone in the division, with a blitzing style that often overwhelms opponents as he pushes forward and unleashes a barrage of strikes. Silva is no slouch on the ground either, coming from a Brazilian Jiu-Jitsu background that has helped him finish two different UFC opponents by submission. The knock on Silva has been his struggles against the best fighters in the division, but when he faces someone outside of the top 15, it's usually a one-sided fight with the Brazilian coming out on top.

It's not a good spot for Rhodes, who has lost his last two fights going into a bout against Silva, who is probably his toughest matchup yet. Rhodes is quick on his feet and has good fundamental kickboxing, but if he starts taking damage from Silva, this one could be over in a hurry.

Prediction: Erick Silva by knockout, round one