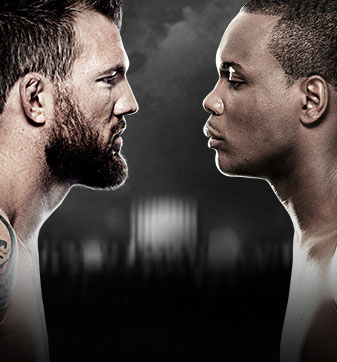 The UFC will debut in the state of Maine for the first time this weekend with a light heavyweight showdown between two top 10 contenders as Ryan Bader takes on upstart Ovince Saint Preux in the five-round main event.

Also on the card, former Ultimate Fighter winner Ross Pearson looks to erase the bad memory from his last fight, where he lost a very controversial decision to Diego Sanchez, when he takes on two-time UFC lightweight title challenger Gray Maynard.

Maine native Tim Boetsch will also look to get back on track after some recent disappointments as he fights for his home state fans against the always tough Brad Tavares.

All told, the main card will feature six bouts, and in today's fantasy preview we're going to examine a few of the key matchups, including the headline bout between Bader and Saint Preux, in order to give you the best chance of coming away victorious in this weekend's UFC Pick Em game.

Since winning The Ultimate Fighter season 8, Ryan Bader has been a constant presence in or around the top 10 of the light heavyweight division.  While he's never gotten as far as a title shot, the only fighters he's lost to have been champions, former champions or No. 1 contenders, and his streak against the best of the rest of the division should stay intact on Saturday in Maine.

Bader is a handful for anyone at 205 pounds, especially since he's gone back to a more wrestling-heavy attack in his last two fights.  Bader is a former All-American wrestler from Arizona State and over the course of his UFC career he's managed to put together the highest takedown rate of anyone in the weight class.  Bader connects with 3.53 takedowns per 15 minutes, and when he mixes things up with a potent boxing attack as well, he's been largely unbeatable in his career.

Saint Preux has developed into a very solid prospect since debuting in the UFC after competing in Strikeforce for several fights.  The former University of Tennessee football player is a natural athlete, but he's also developed a slick ground game where he's hitting takedowns at 60 percent accuracy, with submissions in his last two fights. Where Saint Preux falls short in this fight is with a lack of experience and an ability to counter Bader's own wrestling attacks.

Saint Preux is a powerful striker who lands 55.8 percent of his significant strikes, but his defense has been abysmal, as he's blocking only 49.12 percent of those against him.  He's shown good takedown defense as well, but he's also never faced a wrestler the caliber of Bader in the Octagon.  He's taken on solid competition thus far, but not anything close to what Bader has faced during his UFC career, and experience counts for something.

Bader should be able to work Saint Preux to the mat and begin his offensive onslaught round after round until he wears the former college football player down.  That will result in either a five-round unanimous decision win or potentially a late third or maybe fourth round stoppage for Bader. Saint Preux will learn a lot during this fight, but in the end he will still likely come away with a loss.

The new co-main event just came together a few days ago, but don't worry, both fighters were already competing on the card - albeit against different opponents - until last week.  Pearson is rebounding from a very controversial loss to Diego Sanchez while Maynard is trying to get back on a title track after suffering two difficult defeats in a row to TJ Grant and Nate Diaz.

Up until recently, Gray Maynard had been a staple at the top of the lightweight division, going to war with former champion Frankie Edgar on two occasions in a couple of the most epic battles ever fought at 155 pounds.  Unfortunately, nine rounds with Edgar took its toll on Maynard and after he was lambasted by Grant in early 2013, his next performance looked just as shaky when he fell by strikes to Nate Diaz.  Maynard was known early in his career as a powerful wrestler with knockout power in his hands, but over his last few fights, grappling seems to be the furthest thing from his mind.  His UFC average still shows 2.6 takedowns per 15 minutes, but it would seem those numbers are still mostly coming from his earlier fights, where he had a takedown-heavy attack.

Now, Maynard seems to prefer to box, which has gotten him into trouble in his last couple of fights, but with a change of scenery to Arizona, where he's been training with Ryan Bader and former UFC fighter Aaron Simpson, maybe he's getting back to his wrestling roots.

Pearson isn't going to be an easy test whether Maynard is wrestling or striking because this British banger is proficient everywhere. But he loves to stand and trade if he finds a willing opponent.  Pearson is lightning quick on his feet, where he hits opponents with over four significant strikes per minute while doing so at 41.5 percent accuracy.  His takedown defense has shown to be really solid as well, as he has blocked 81 percent of the attempts going against him during his UFC career.

The question in this fight really comes down to which Gray Maynard shows up?  Is it the confident title contender with a bevy of wrestling takedowns in his back pocket or will he be a gun-shy striker just hoping his chin holds up under the storm of punches Pearson will launch at his head for three rounds?

The unknown factor makes Maynard a risky pick and so Pearson remains the slight favorite to win, but chances are he'll get there by unanimous decision.  Still, if Maynard looks shaky or forgets to duck his chin when he goes in to exchange with Pearson, he could very well suffer his third straight knockout loss in a row.

There's no hometown bias in this betting line because despite being one of the only fighters from Maine on the card, Tim Boetsch enters his bout as a decided underdog to Brad Tavares.

Boetsch has had a rough stretch of late, going 1-3 in his last four fights with his only victory coming by way of decision over CB Dollaway in a bout most people scored the other way around.  When he first came to the middleweight division, Boetsch was a powerhouse, using his takedowns to overmatch opponents and sometimes to create opportunities with his sledgehammer punches and durable chin.  Lately, since he's jumped into the deep end of the division, Boetsch has seen how the other half lives, falling to Costas Philippou, Mark Munoz and Luke Rockhold.

Tavares is still searching for a signature win of his own after picking up five victories in a row and going largely unnoticed.  He got a main card fight on FOX in his last trip to the Octagon and then took a sound beating from former Olympic silver medalist Yoel Romero.  Prior to that defeat, however, Tavares was quietly mounting a solid resume in the division with a steady stand-up attack he used to outpoint opponents while rarely putting himself in bad positions to taste a counter strike from anybody he faced.  Tavares doesn't do anything flashy (3.11 strikes per minute landed at 41-percent accuracy) but he's very basic in his attacks and that makes him hard to counter. His wrestling defense has been good as well, as he’s blocked nearly 70 percent of the takedowns attempted against him, but Tavares' biggest weapon against Boetsch will likely be his speed.

Boetsch is a big fighter for middleweight, and he throws punches like an anvil swinging at an opponent on a pendulum.  So as long as Tavares can avoid getting stuck against the cage with Boetsch hammering away at him or getting taken to the mat, where he'll taste the former wrestler's power, it should be a stick and move, hit and don't get hit performance.  If Tavares sticks to that game plan and keeps it simple, he'll walk out of Maine with a decision victory to get back on track.

If you're looking for a fight not likely to make it out of the first round, this is the one for you.  Heavyweights Shawn Jordan and Jack May are both well-known finishers, and with the kind of power they'll be throwing at each other, it's hard to imagine this one will go much further than the first five minutes.

May will come into the fight with a huge reach advantage, standing 6'8" tall, which gives him a full eight inches over the much shorter Jordan.  May fell in his UFC debut, although he didn't start out the fight all that bad until he fell prey to Derrick Lewis' devastating power, resulting in his only professional loss.

Jordan has a wealth of experience by comparison, and while he is coming off two consecutive losses to Matt Mitrione and Gabriel Gonzaga, his upside is still enough to believe he'll win this battle in Maine.  Jordan is definitely a go big or go home kind of fighter, but he's not out of his element with a technical stand-up fight either.  He lands 3.13 strikes per minute with over 50 percent accuracy.  His defense leaves something to be desired, but then again at heavyweight all it takes is one punch and the entire fight changes on a dime.

May has to know a second knockout loss could be devastating to his long-term future, so if he comes out tentative in any way early in this fight trying to wade into the deep end, Jordan will make him pay.  The former LSU football player has enough raw power to bull rush his much taller opponent and blast away with inside punches until the giant topples over and the referee stops the fight.  Jordan may never be a top 10 heavyweight, but it's the fights against competitors like May that allow him to shine.  He'll be as bright as the sun on Saturday if things go as planned.