Check out some of the stars from Fight Night Austin in action! 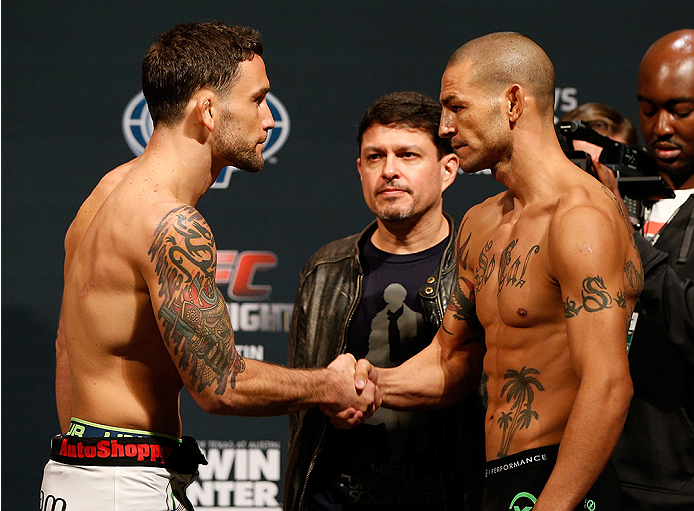 Frankie Edgar
Fight Night Austin headliner Frankie Edgar started his UFC career in true phenom fashion, ripping off three straight wins while outstriking opponents 128-50 and maintaining a 16-3 takedown advantage during that streak. That is until he ran into Gray Maynard at Fight Night Broomfield in 2008. Maynard would go on to use his size and wrestling to take Edgar to the canvass nine times en route to a decision win. Edgar rebounded nicely, however, destroying his next three opponents on his way to a lightweight title fight with UFC legend BJ Penn at UFC 112. The New Jersey native, Edgar, would go on to dispatch Penn twice, setting up a rematch with Maynard for the belt. After a five-round war, judges scored the bout a draw, just the third time in UFC history that a title fight had ended with no winner. Seven months later, Edgar and Maynard were at it again, set to complete their trilogy at UFC 136. Edgar made it clear that day that he was the true king of the lightweight division.

MORE: Rapid Fire with Frankie Edgar | Gym Escape
Cub Swanson
Cub Swanson has always had the talent to compete at a championship level. But during his time in the WEC, the Palm Springs native struggled to string together wins, falling to the top-notch competitors Jens Pulver, Jose Aldo, and Chad Mendes before losing to Ricardo Lamas in his UFC debut. The Lamas loss was a turning point for Swanson, who would go on to win his next six fights. During that impressive streak, which started with a second-round submission of George Roop, Swanson finished tough featherweights Ross Pearson, Charles Oliveira, and Dennis Siver. His latest win, a decision over Jeremy Stephens, set Swanson up for a critical featherweight bout that has significant title shot implications.

MORE: Swanson vs. Roop | Pride of Palm Springs | Swanson vs. Franchi | Gym Escape | One Round
Bobby Green
‘King’ Bobby Green is one of the hottest prospects in the lightweight division. The California native has won eight in a row dating back to his Strikeforce days and is coming off an exciting split decision win over highly-regarded lightweight Josh Thomson. A win against Edson Barboza in Austin firmly positions Green in the lightweight title shot conversation.

Edson Barboza
Explosive lightweight Edson Barboza won seven of his first eight fights in the Octagon, but it was his fourth win that put the Brazilian on the map. Taking on finishing ace Terry Etim in his hometown of Rio de Janeiro, Barboza unleashed one of the deadliest spinning heel kicks in UFC history. The kick, which landed flush and sent Etim falling to the canvass, was ranked as the third-best knockout in UFC history.

Joseph Benavidez
Since 2008, Team Alpha Male’s Joseph Benavidez has lost only four fights – twice to former bantamweight champion Dominick Cruz and twice to current flyweight titleholder Demetrious Johnson. Benavidez, however, has also won 13 fights during that same time period, with four coming by submission and four by knockout. Check out Benavidez’s third-career submission under the WEC/UFC banner, against then 14-1 Wagnney Fabiano.

MORE: Signature Moves | #AskAFighter | 3 Things You Don’t Know About Me