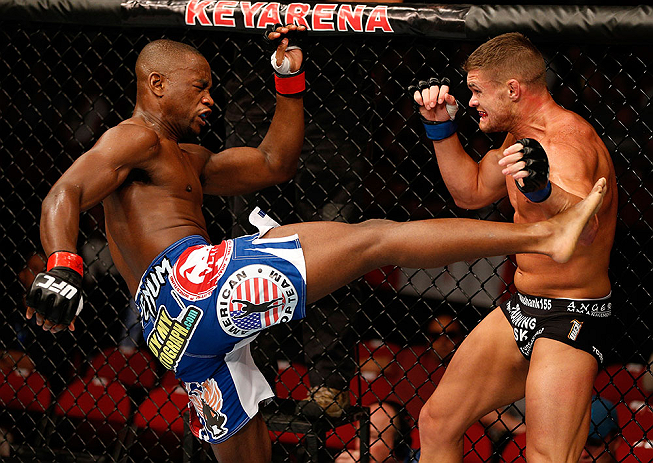 Ruslan Magomedov makes his second appearance in the UFC after a successful debut as he looks to build upon his 12-1 overall record against an undefeated newcomer by the name of Josh Copeland, who is 9-0 as a pro with finishing power in both hands and a slick submission game as well.

Also on the prelims, popular former Ultimate Fighter competitor Luke Barnatt takes on Roger Narvaez in an interesting middleweight showdown while the master of Thug-Jitsu, Yves Edwards, makes his 21st UFC appearance when he takes on Akbarh Arreola.

As the weekend draws near, the fantasy preview today will focus on the preliminary bouts on the card which often determine who wins in the UFC Pick Em game, so let's take a look at some of the key matchups.

There's some hype behind debuting fighter Josh Copeland, who comes to the UFC with an unblemished record and one of the more interesting nicknames you're ever likely to hear Bruce Buffer scream during an introduction.  Copeland is also known as "Cuddly Bear," but he should probably be known as a grizzly, considering the way he's mauled his competition on the way to arriving in the UFC.

Copeland is a smaller heavyweight, standing just 6'1" tall, but he makes up for it with devastating power and serious athleticism.  Copeland moves really well for a big man and he mixes up his attacks between quick boxing on the feet or a suffocating ground attack on the mat.  If there's a knock on Copeland it's the fact that he's still unknown when it comes to facing ranked competition.  Most of the fighters on his resume are also prospects, so it's tough to judge whether he was just the big fish in a small pond or really ready to graduate to the UFC.

Magomedov will definitely test him because the Dagestani native is the latest in a line of top fighters migrating to the UFC.  Magomedov packs a big punch and uses Sambo for his wrestling so he's not afraid to get into close quarters before putting an opponent on the mat.  Where Magomedov excels is in his track record.  He holds wins over two former UFC champions (Ricco Rodriguez and Tim Sylvia) and he has a fight inside the Octagon, which can be valuable experience when it comes to the infamous first-time jitters many competitors feel.

Magomedov is smart enough to know what Copeland is bringing to the table, so all he has to do is stick to his guns and refuse to allow his opponent to land the big shot to finish the fight and he'll be able to grind his way to victory.

Following a very disappointing outing in his last fight, former Ultimate Fighter contender Luke Barnatt will be looking to impress this weekend against second-time UFC fighter Roger Narvaez. Barnatt came out on the wrong end of a decision in an ugly fight he'd probably rather forget.  He'll try to remind the world why he was considered a top prospect at 185 pounds when he faces Narvaez in Texas.

Barnatt is deceptively powerful with both a long-range punch and kick.  Standing 6'6" tall, Barnatt will have a reach advantage over nearly every fighter in the division, but he uses his length as a real strong point in his overall game. He's a very busy striker, landing 5.79 strikes per minute, and he's also shown good takedowns as well in those rare moments he decides to use them.

Narvaez will probably be thankful to face a striker this time after getting wrapped up like a Christmas present in his last fight against former All-American wrestler Patrick Cummins.  Narvaez traditionally has preferred fights to take place on the mat, but after his last bout he might be gun shy to go there out of fear he might get stuck.

One second of hesitation is all Barnatt will need and he'll seize the moment.  Narvaez giving even the slightest crack in his defense will result in Barnatt landing the right kick or punch to put the fight away before the final bell.

It might be do or die for Edwards as the veteran UFC fighter enters his bout on Saturday night after losing three out of his last four, but this matchup against Akbarh Arreola could be just what the doctor ordered to get him back on track in the win column.

Edwards has been one of the most creative strikers to ever fight in the UFC. For further proof, just go back and watch his 2004 bout against Josh Thomson.  Edwards blends kickboxing, Tae Kwon Do and a few other arts to make up the style he calls "Thug-Jitsu".  Statistically, Edwards won't blow you away.  He lands just under three strikes per minute with 43 percent accuracy.  But it’s the fact that at any moment he could uncork a monstrous punch or highlight reel knee strike to end the fight that makes Edwards such a tough fighter to prepare for.

Arreola lost his initial fight in the UFC and so he knows the pressure is on to win this time around.  Arreola is a solid ground fighter who actually took his last opponent down at will when he debuted, but the rest of his game was still lacking.  He prefers a submission-style attack, which has hurt Edwards before but probably not this time around. Arreola just hasn't faced the kind of talent Edwards has during his career to make me feel confident in picking him to win this fight.

Two of the most exciting prospects in the women's strawweight division face off this weekend with Paige VanZant and Kailin Curran both debuting on the UFC Fight Night prelims.

VanZant made a splash earlier this year when she was expected to be a part of The Ultimate Fighter cast this season, but legally all participants have to be at least 21 years of age at the time of filming and because she was only 20, she didn't qualify.  Instead, she'll get an automatic entrance into the UFC, where she may one day be a legitimate threat to the title.  VanZant has a good mix of kickboxing and wrestling with a dominant top game at her disposal.  She's trained in the past with Team Alpha Male in Sacramento, so undoubtedly she's got her wrestling game on point along with a submission arsenal that should be feared.

On the other side, Kailin Curran is a similar fighter to VanZant, just not quite as polished.  Curran comes from a wrestling background, where she grappled during high school before picking up kickboxing for the first time a few years ago. She now trains out of the Reign Training Center, where she's coached by UFC middleweight Mark Munoz and a host of other notable Octagon veterans.

This fight really comes down to VanZant being able to perform the way she has in past bouts prior to the UFC.  VanZant is well-rounded, hits hard and she's tough to beat if she can drag a fight to the mat.  Watch out if she lands on top because she will rain down hell from above and that's the last place Curran wants to be for her debut.  If you factor in slight nerves from both fighters, this could be a bout that has a slow start, but once the punches start flying, things will get very interesting.

Still, in the end, remember the name Paige VanZant, because she's someone who could be one day challenging for the title with enough time and evolution in her game.