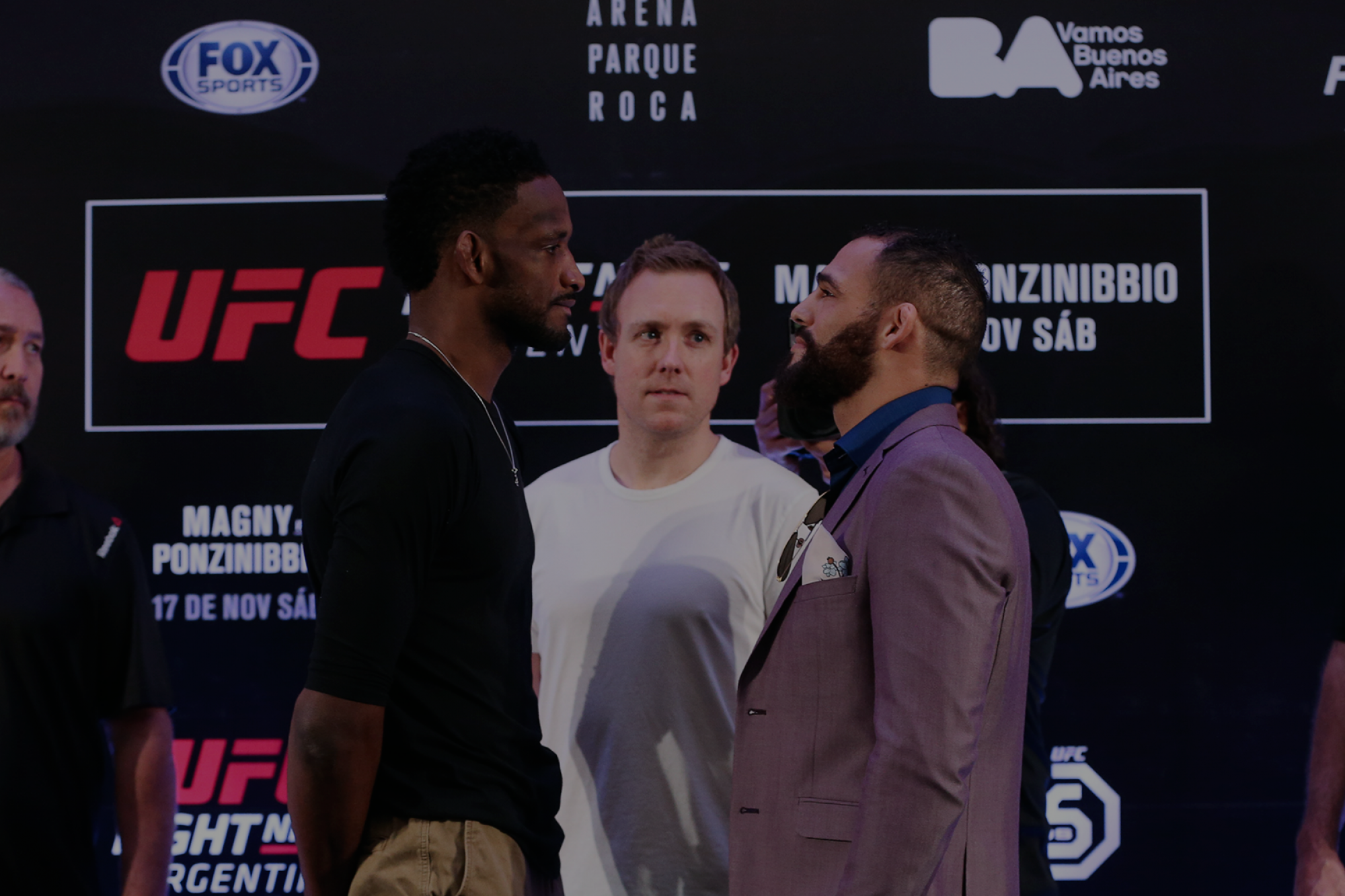 Watch Khalil Rountree's recent Performance of the Night when he finished Gokhan Saki at UFC 226.

NEIL MAGNY VS. SANTIAGO PONZINIBBIO
The winner of the first UFC event in Argentina could be knocking on the door of a top five fight as Neil Magny takes on home country favorite Santiago Ponzinibbio. Magny remains one of the most criminally underrated fighters on the entire UFC roster despite having several statement wins over the likes of Kelvin Gastelum and Carlos Condit. Magny is also no stranger to stepping into enemy territory for a fight and he'll definitely try to play spoiler again on Saturday night. Ponzinibbio will get a chance to headline a card at home in Argentina while attempting to win his seventh straight fight. While climbing up the rankings, Ponzinibbio has proven to be one of the best strikers at 170 pounds, but he'll certainly have his hands full with a well-rounded technician like Magny in this five-round main event.

RICARDO LAMAS VS. DARREN ELKINS
It wasn't that long ago that Ricardo Lamas was battling for the UFC featherweight title, and although he's fallen on harder times lately, he remains one of the toughest outs in the 145-pound division. Lamas is a skilled wrestler with good boxing and serious tenacity to push the pace for all 15 minutes. That said, if Lamas is tough, Darren Elkins might want to change his nickname to leather because he might just be the most durable athlete in the sport. Elkins has an innate ability to take a ton of punishment and still find a way to gut out a victory. He's never out of a fight as long as there's time left on the clock, so this co-main event could end up as the show stealer when the night is over.

KHALIL ROUNTREE JR. VS. JOHNNY WALKER
Expect fireworks in this light heavyweight showdown as Khalil Rountree Jr. takes on Dana White’s Contender Series veteran Johnny Walker. Rountree has a reputation for his devastating power, especially during those first few exchanges in the opening round every time he competes. Walker will be an interesting target considering he's 6-foot-5 and possesses serious knockout power of his own. It would be tough to see how this fight ends in a decision, so enjoy it while it lasts.

CEZAR FERREIRA VS. IAN HEINISCH
With a 5-1 record in his past six fights, Cezar Ferreira remains a contender to watch in the middleweight division with a world-class submission arsenal at his disposal. He has put together an impressive resume in the UFC, including a win over top three-ranked light heavyweight Anthony Smith while he was still competing at 185 pounds. Ian Heinisch accepted this fight on short notice but he will definitely bring the fire when he steps into the Octagon. Fresh from earning a devastating knockout on Dana White's Tuesday Night Contender Series back in July, Heinisch has finished his last three opponents and he'll go for the fourth on Saturday night.

GUIDO CANNETTI VS. MARLON VERA
A pair of former Ultimate Fighter: Latin American cast members will meet on the main card as Argentina's own Guido Cannetti takes on Marlon Vera. Cannetti has bounced back and forth between wins and losses over his past four fights, but competing in front of a home crowd will certainly add a little extra motivation. Vera will look for his second win in a row after earning a nasty TKO in his last performance from August, moving his UFC record to 5-4 overall.

CYNTHIA CALVILLO VS. POLIANA BOTELHO
A strawweight battle will kick off the main card as Cynthia Calvillo makes her return to action against highly-touted Brazilian prospect Poliana Botelho. Calvillo is coming back from the first loss of her career and is more determined than ever to return to the win column following a razor close defeat to former champion Carla Esparza. As for Botelho, she's currently 2-0 in the UFC with a TKO in her most recent performance. The winner of this fight could make an impact in the 115-pound rankings, so expect sparks to fly in this one.

MICHEL PRAZERES VS. BARTOSZ FABINSKI
Somebody's win streak will come to an end in this welterweight clash between submission specialist Michel Prazeres and Polish standout Bartosz Fabinski. Prazeres will make his second straight appearance at 170 pounds after notching his seventh win in a row in his most recent fight. Fabinski has a similar seven-fight win streak, including three straight wins in the UFC.

ALEXANDRE PANTOJA VS. ULKA SASAKI
Top 10-ranked flyweight Alexandre Pantoja will look to build on his 3-1 mark in the UFC when he takes on ultra tough Ulka Sasaki on the preliminary card. Pantoja has been a great addition to the 125-pound division after debuting on The Ultimate Fighter while facing a laundry list of top competition. Sasaki will be the latest test as he looks to get a second straight win after a submission victory in his most recent fight in June.

HUMBERTO BANDENAY VS. AUSTIN ARNETT
Humberto Bandenay made quite the Octagon debut last year with a stunning 26-second head kick knockout but then suffered a defeat in his next outing. Now he'll look to get back on track while facing Contender Series veteran Austin Arnett, who is still searching for his first UFC win after three straight losses.

LAUREANO STAROPOLI VS. HECTOR ALDANA
Argentinean welterweight Laureano Staropoli will make his UFC debut in front of a home audience when he takes on Hector Aldana on Saturday night. Staropoli has won his last five fights in a row, all by knockout or submission. Meanwhile, Aldana is returning from back-to-back losses in the UFC and he would like nothing more than to return to the win column while playing spoiler in Staropoli's backyard.

DEVIN POWELL VS. JESUS PINEDO
Coming off a stunning knockout win in his last fight, Devin Powell will look to make it two in a row when he faces veteran Peruvian fighter Jesus Pinedo. Both fighters are known for an aggressive style, with Pinedo earning finishes in each of his past six victories, so don't blink when these two meet in the center of the Octagon and throw down this weekend.

NAD NARIMANI VS. ANDERSON DOS SANTOS
Nad Narimani will make his second walk to the Octagon this weekend after a successful debut earlier this year. The 11-2 British prospect will take on late replacement Anderson dos Santos, who moves up from the bantamweight division for this opportunity. Dos Santos is fresh off a win in early November, so he's obviously still in shape and ready to chase the upset in his first fight in the UFC.