SHAMIL ABDURAKHIMOV VS DERRICK LEWIS
It’s the most wonderful time of the year…to see a fighter go from contender to star, and while 2016 has been a breakthrough year for Derrick Lewis, a big win in his first headlining gig could be a star-making turn for “The Black Beast.” Sure, the win over Roy Nelson wasn’t pretty, but that’s nothing a knockout of Dagestan’s Shamil Abdurakhimov can’t cure. “Abrek” is a tough out though, making this an intriguing headliner.

ANTHONY HAMILTON VS FRANCIS NGANNOU
The first bout of the heavyweight doubleheader at the top of the Albany card won’t have any significant impact on the top ten, but it will set a tone for the winner heading into next year. Francis Ngannou is the hot prospect, already ranked 12th in the world, and a win over Hamilton will set up some big fights for him in 2017. Hamilton, while erratic in the Octagon at 3-3, is no stepping stone, and if he beats Ngannou and puts together his first two-fight winning streak in the UFC, he’ll be the one with an interesting 2017 ahead of him.

SEAN O’CONNELL VS COREY ANDERSON
Sean O’Connell always does everything in his power to make every fight exciting, and on Friday, that may involve staying off the mat against Corey Anderson. If he can force the former TUF winner into a standup fight, this one might resemble Anderson’s bout with Gian Villante, and that one earned Fight of the Night honors.
RELATED CONTENT: By the Numbers | Abdurakhimov ready for spotlight | Lewis: Put Some Respect on his Name | Fight of the Night contenders in Albany

SAPARBEG SAFAROV VS GIAN VILLANTE
Speaking of Gian Villante, the popular Long Islander gets a home game on Friday, and though a fight with Pat Cummins went by the wayside due to injury, Villante may get a more favorable matchup in newcomer Saparbeg Safarov. Safarov is unbeaten and has finished each of his wins, but he hasn’t done it against UFC-caliber competition, leaving the door wide open for either a big win for Villante or a big opening statement for Safarov to prove that he’s as good in the Octagon as he was on the regional scene.

ASHLEY YODER VS JUSTINE KISH
Justine Kish has shown that she has the skill set to compete with the best in the 115-pound division, but inactivity has been an issue, as she’s only fought once since an RFA win over Randa Markos in January of 2014. That may leave a perfect opening for newcomer Ashley Yoder to come in on Friday night, push a fast pace on Kish and pull off the upset. 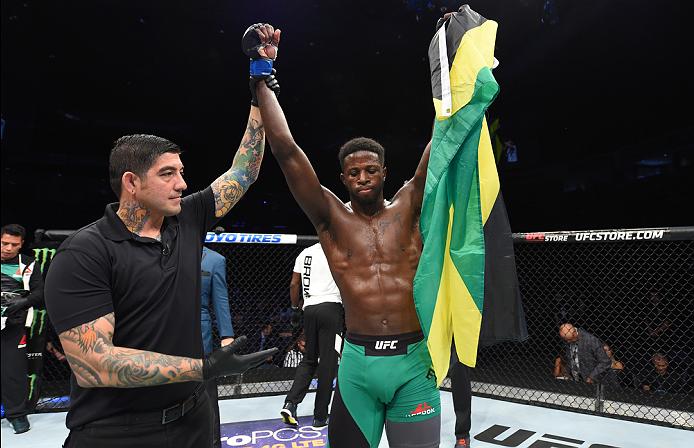 BRIAN CAMOZZI VS RANDY BROWN
Given Randy Brown’s dynamic skill set and Brian Camozzi’s constant search for a finish on fight night, this one should be very, very interesting. So who wins? The one who deals with their particular intangible better – Brown fighting at home in New York and Camozzi getting the first time UFC jitters.

GERALD MEERSCHAERT VS JOE GIGLIOTTI
Joe Gigliotti got no favors in his UFC debut against veteran Trevor Smith, and he’ll face another seasoned competitor in Octagon newcomer Gerald Meerschaert. Despite this, Gigliotti does have talent, so if he’s going to go to the next level, he’ll have to win fights like these, and with him training back home in Ohio for this fight, he may have that comfort level to get the job done on Friday.

TREVOR SMITH VS ANDREW SANCHEZ
Trevor Smith is the perfect test for TUF 23 winner Andrew Sanchez this week. He’s going to press, push and try to finish Sanchez from start to finish, but “El Dirte” does have the grappling ability to put Smith in an uncomfortable place and keep him there for 15 minutes, which is precisely what he did in beating Khalil Rountree Jr. in July.

SHANE BURGOS VS TIAGO TRATOR
New Yorker “Hurricane” Shane Burgos gets his first Octagon shot against tough Brazilian vet Tiago Trator, and on paper, this is a tall order for Burgos. But the kid is talented, he’s a versatile finisher, and he’s confident but not cocky. It’s the perfect scenario for him to make a statement and stamp himself as a future star.

MARC DIAKIESE VS FRANKIE PEREZ
This may be the Fight of the Night on Friday, and there are so many angles of intrigue here. Perez is coming off a short-lived retirement, but his last time out, he knocked out Sam Stout in less than a minute. England’s Marc Diakiese, who had an impressive debut in October, would love a standup fight, but what if Perez decides to put the fight on the mat? Then it gets interesting all over again. Definitely a fun fight.

RYAN JANES VS KEITH BERISH
Poor Ryan Janes. Two UFC fights fell apart on him so far, but all signs are pointing to him finally making the walk on fight night against Keith Berish. Both fighters have impressive submission games, making this a bout with the potential to show off some high-level grappling.

JJ ALDRICH VS JULIANA LIMA
Brazilian strawweight contender Juliana Lima is one of the top 115-pounders in the division, with her only loss coming via decision to current champion Joanna Jedrzejczyk. That’s a tough assignment for your first UFC fight, but JJ Aldrich is a competitor and one of those fighters you can’t ever count out. This could turn into a barnburner.