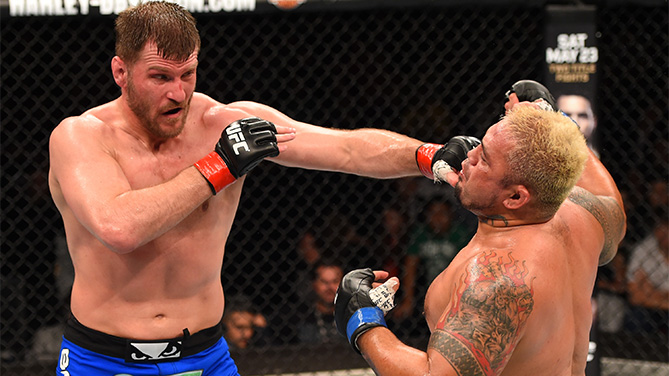 Stipe Miocic traveled halfway around the world to improve his position in the UFC’s heavyweight class. He returned home Sunday with a legitimate claim to the No. 1 contender spot.

The division still has to be sorted out – champion Cain Velasquez takes on interim titlist Fabricio Werdum at UFC 188 in June – but the winner can certainly expect to see Miocic standing next in line.

Today’s Talking Points from UFC Fight Night in Adelaide, Australia – a card in which 11 of 12 bouts ended in either KOs or submissions -- leads off with a lopsided Miocic victory over a game but outmatched Mark Hunt.
> WATCH: UFC FIGHT PASS main card replay | prelims replay 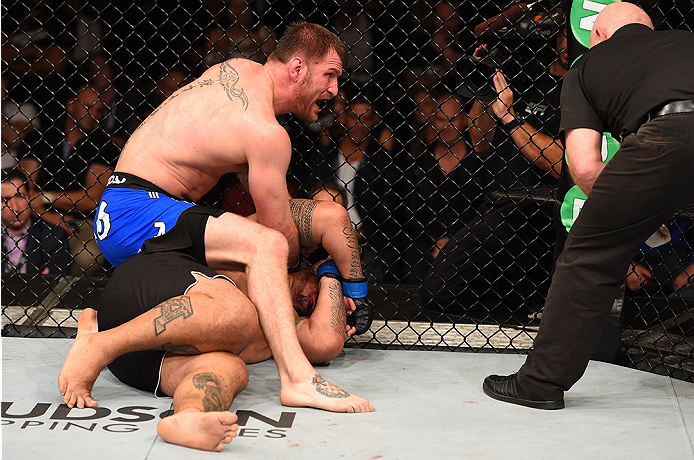 1. Give Hunt credit. He put up a resistance for as long as he could, but the No. 4-ranked Miocic – a better-conditioned, better-prepared fighter – led virtually the entire way before his barrage of punches resulted in a TKO midway through the fifth round. In actuality, it could have been stopped much sooner, that’s how badly Hunt was losing.
The pro-Hunt crowd at Adelaide Entertainment Centre booed Miocic for continually taking the fight to the ground, but his strategy of tiring his opponent by making him work to get back on his feet worked perfectly. Hunt, who fights out of Sydney, Australia, was showing wear and tear after the opening round, and by the end, his left eye was shut and the left side of his face was badly swollen.

Hunt is a big puncher, but he rarely was able to throw the kind of shot that has cut down opponents in the past. 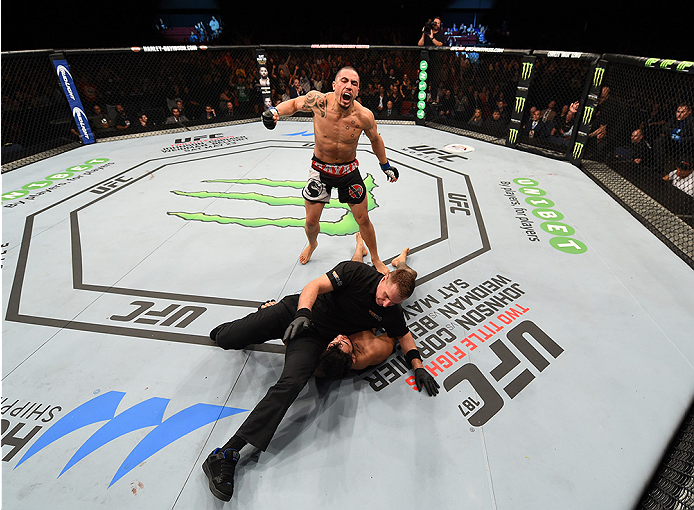 2. Unranked Robert Whittaker of Sydney is almost certain to find himself in the top 15 among UFC middleweights after his spectacular knockout of No. 14 Brad Tavares in the co-main event.

Whittaker is a capable puncher, but he displayed a vicious left hook – two of them, actually – to shock the favored Tavares. After the first one, Tavares scrambled back to his feet. After the second, Tavares was finished, just 44 seconds into the first round.

Whittaker (14-4) now has three consecutive wins, two by KOs, after losing two in a row. He earned the ranking he is almost sure to get.
> WATCH: Fight Night Adelaide - Robert Whittaker Octagon Interview | Backstage Interview 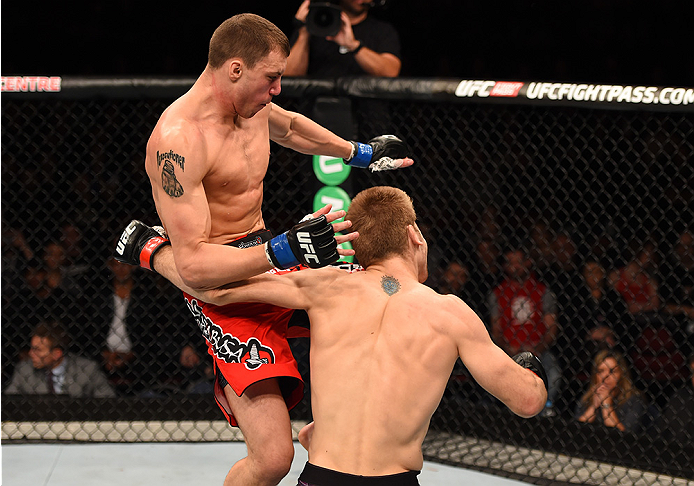 3. Australian Jake Matthews seemed ready to burst onto the scene in the lightweight division, a 20-year-old with big-time power and good looks – that is, if you consider Justin Bieber good looking.

But Matthews, who was unbeaten and had finished eight of nine previous opponents, was stunned by Texan James Vick (8-0), who used a guillotine choke with one second left in the first round to get the win.

So for now, Vick, rather than Matthews, belongs on your radar. 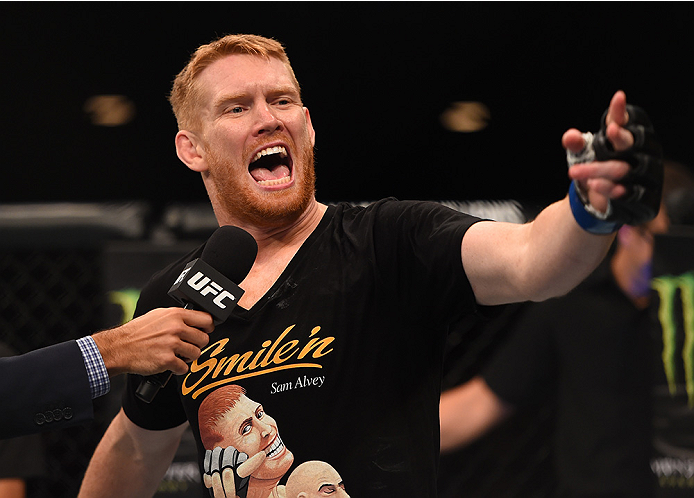 4. Smiling Sam Alvey should consider applying for Australian citizenship. Although he stopped previously unbeaten Dan Kelly (9-1) of Melbourne with a first-round KO, he still had fans cheering him during a post-fight interview.

Alvey (26-6), undeniably the happiest guy in the UFC, called out Elias Theodorou by claiming to have a better head of hair. “If I lose,” he said, “I’ll shave my head.”

Alvey, who has three consecutive first-round knockouts, might have earned himself a spot on a main card. That would put a smile on his face. 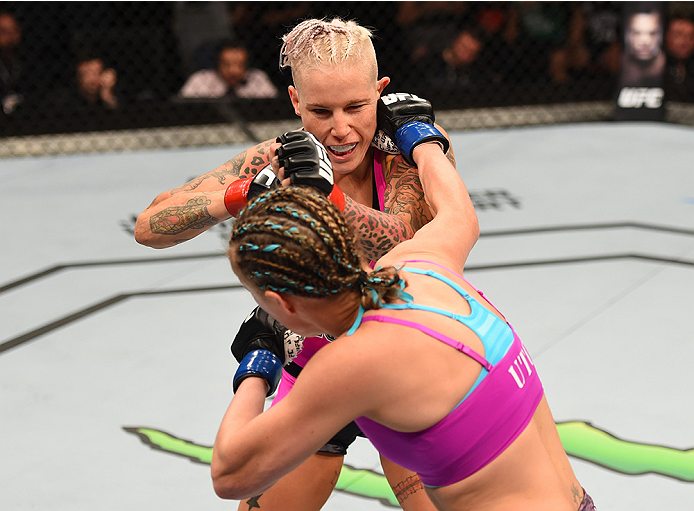 5. Never underestimate the women. Sometimes they provide the best finishes.

Two cases in point: Alex Chambers, who was less than two minutes from a likely loss by decision, came out of nowhere to defeat promising Kailin Curran with an armbar in the third round.

Later, Bec Rawlings, one of the bad girls on the recent “The Ultimate Fighter&rdquo; that crowned the first women’s strawweight champion, stopped veteran Lisa Ellis via rear naked choke.

For Rawlings, it was payback in a big way. Ellis, from Olympia, Washington, criticized her opponent for training in the U.S. and leaving her two young sons in Australia with family, a comment Rawlings took personally.

“I wanted to hurt her and get a TKO or KO but I'm happy to get the finish,” Rawlings said. “I wanted to prove how tough mums can be. I couldn't lose on Mother's Day.”