The Fight Matters for Ross Pearson 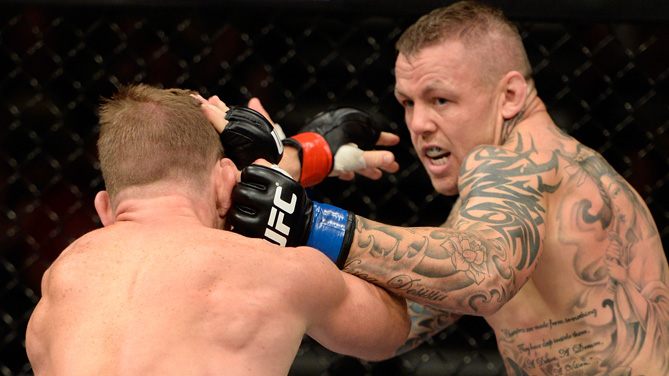 It took longer than the combined time of Ronda Rousey’s last three title defenses, but was no less intense. For one minute and 26 seconds, UFC lightweight Ross Pearson was fired up, but resolute, in responding to the question of why he wanted to get back in the Octagon so soon after his July 18 loss to Evan Dunham.

“Disappointment, frustration, upset with myself with the way the last fight went,” Pearson began. “They’re not the fights that I want to put on. Evan came with a game plan to not fight, to stall, to win a decision. He didn’t come to put on a show like I expected him to do. You never saw Evan Dunham fight like that before, and I didn’t expect him to do that. And he got away with a win. It wasn’t an impressive win, by any means.”

“The Real Deal” was just getting started, as he seemingly went back in time to that night in Glasgow, where he lost a three-round unanimous decision to Dunham. It was a clear-cut victory for the Las Vegan, but far from the Fight of the Night type battle most – especially Pearson – expected.

“He did what he had to do to get a decision, but it frustrated me, and all that hard work I do, all the training that I do, I want to fight at the end of it,” Pearson continued. “I didn’t get hit, I didn’t get marks…I got laid on. He held me down. He went for one submission in the first round – an armbar – and it was a bad position for me, but I worked my way out of it and I was never hurt or close to being submitted. But one submission attempt in 15 minutes is a pretty poor attempt at a fight. If you look back at the old days with the PRIDE rules, I think Evan would have gotten a yellow card, maybe two yellow cards.”

Pearson stops, then explains himself in one sentence.

“You can tell by the way I’m talking that I wanted to fight and I didn’t get that.”

Oh, we most certainly can tell that, and while some would say that Dunham fought a smart fight (he did) and that Pearson should have been ready for whatever his opponent had in store for him during the fight, the above comments show the passion and commitment the Sunderland, England native has for the art of the fight. Not a mixed martial arts contest, but a fight. Ross Pearson cares.

“I still see myself as old school,” the 30-year-old said. “I still see myself as UFC 1, UFC 2, UFC 3, you know? (Laughs) I still have that mentality of just going out there and putting on fights and I think that’s why I’ve been around for a long time. I’ve had some losses on my record, I’ve had some good wins, and I’ve floated around the top tier of the division for a while, but never really made any big statements because I take risks. I go out and fight. I fight when I’m injured, I fight when I’m not a hundred percent, I fight because I love to fight, and I think that’s the journey that I’m on and that’s the type of person that I am. I never quit, I never stop, I just keep fighting, and it’s because I love what I do. It’s not about winning the first battle; it’s about winning the war.”

Pearson’s war is still going strong despite the defeat to Dunham and a spotty record over the last couple years. He feels that he’s on the right track, and just staying afloat in what most believe is the sport’s toughest weight class is an accomplishment in and of itself. But while most fighters who say they fight to put on entertaining performances are satisfied with that alone, Pearson wants a world title, and to put himself in position to get a crack at the belt, he needs to win and win consistently.

So as the dust settled from the Dunham fight, Pearson was lobbying for a return to the Octagon as soon as possible. It was a mindset shared by another lightweight coming off a loss, Philadelphia’s Paul Felder. The defeat suffered by “The Irish Dragon” on July 25 to Edson Barboza was the polar opposite of Dunham-Pearson, as both picked up a Fight of the Night bonus for their efforts. But the sting of his first pro loss didn’t sit well with Felder, and he was on the phone to the UFC for a fight as well.

Pearson and Felder got their wish, fighting each other on the UFC 191 card in Las Vegas.

“Paul’s the type of fighter that got the alarm bells ringing straight away when (UFC matchmaker) Joe (Silva) said the name,” Pearson said. “I looked him up and found out what he did and who he trains with, and he looks like the type of guy I want to fight. He comes out, he presses forward, he throws kicks and punches, he throws knees, and he looks to go out and have a fight. These are the type of opponents that I want to fight.”

Is it safe to say that for 15 minutes on Saturday, the Octagon will be a takedown-free zone? Pearson finally finds the place for a little levity, as he can almost guarantee that Felder will not be looking to win a decision. For most, that would be a scary fight to go into. Most are not Ross Pearson.

That would be the perfect way to end it, but Pearson wants to explain that this isn’t a way for him to pick up a paycheck. It’s much more than that.

“This is my life, this is what I do,” he said. “It’s all I see, all I think about, and like I said from the beginning, I’m only human. I’ve made mistakes along the way, I’ll keep making mistakes, but I’ll never quit. I don’t know why I am the way I am. (Laughs) I’ll keep going until the UFC and (UFC President) Dana (White) sit down with me and say ‘look, you ain’t fighting no more.’ I’m going to go all the way to the end. The bigger the fight and the bigger the opponent, the better I turn up. The more dangerous the guys are, the better I fight. So I’m really excited for this fight.”