Rising bantamweight star Jack Shore got the night started with a finish, as he submitted returning Aaron Phillips in the second round.

Shore slammed Phillips to the mat in the second minute, putting the fight exactly where he wanted it. Phillips scrambled back to his feet but Shore stayed locked on before he got the action to the canvas again, taking the Louisianan’s back in the process. After letting go of that position, Shore landed a few hard knees to the face before another takedown just before the horn.

Shore got the fight right back to the mat to start round two, and after patiently working for his opening to finish matters, he did just that, sinking in the rear naked choke that forced Phillips to tap at 2:29 of the second stanza.

Flyweight prospects took to the Octagon in the second bout of the UFC Fight Night card, with Liana Jojua needing less than a round to submit Diana Belbita.

Belbita fired off some crisp strikes to start the fight, but surprisingly looked for a takedown, which she got in the second minute. There, Jojua wasted no time implementing her ground attack, sinking in a deep armbar that produced a tap from Belbita 2:43 into the bout.

Jared Gordon was on top of his game throughout his three-round featherweight bout with Chris Fishgold, taking a unanimous decision win over the Brit.

Both fighters had their moments in the opening frame thanks to matching guillotine choke attempts, but it was Gordon finishing strong with some solid ground-and-pound until the horn.

Fishgold’s striking was sharp as the second round opened, and while the Liverpool product responded to a Gordon takedown with another guillotine attempt, the New Yorker got free quickly and went to work from the top position, where he stayed for the rest of the round, wrapping up a dominant frame.

Gordon punished Fishgold with short strikes for the majority of the third round, putting a stamp on a hard-fought victory.

A meeting of light heavyweight debutants resulted in a first-round stoppage for Modestas Bukauskas over Andreas Michailidis.

The first round was a tough one to call, with both fighters getting in their share of shots throughout, but in the closing moments, Michailidis shot in for a takedown and Bukauskas responded with a series of elbows to the side of the head. After the horn sounded, Michailidis stumbled while trying to stand up, and that was all referee Dan Movahedi needed to see to call a halt to the bout. The official time was 5:00 of round one.

With the win, Lithuania’s Bukauskas improves to 13-3. Greece’s Michailidis falls to 12-4.

Ramos led the action early on, but Murphy had an answer for each attack, and when he got the bout to the mat with under two minutes to go, “The Miracle” unleashed a series of ground strikes that hurt Ramos and brought in referee Rich Mitchell to stop the fight at the 4:18 mark of round one.

Unbeaten Khamzat Chimaev was flawless in his UFC debut, submitting John Phillips in the second round of their middleweight bout.

Chimaev’s first offensive burst in the Octagon was an explosive one, as he threw a kick followed by a thudding takedown. Chimaev followed up with strikes that bloodied the Welshman and the Sweden product kept them coming until the horn intervened.

After landing 72 strikes in the opening round, Chimaev put the fight back on the mat as soon as the second stanza began, and moments later, he locked in a D’Arce choke and Phillips tapped out. The official time was 1:12.

Welterweight strikers Mounir Lazzez and Abdul Razak Alhassan didn’t hold back in unleashing their full array of attacks, but the durable 170-pounders went all three rounds, with the debuting Lazzez earning a unanimous decision over Alhassan, who was making his first start since 2018.

Alhassan unloaded bomb after bomb on Lazzez in the early going, but Lazzez took everything with no issue, and as Alhassan’s attack slowed, it was the newcomer firing back with knees, leg kicks and elbows. Soon it was Lazzez leading the offense, and he finished the round with a takedown to add to his point total.

Lazzez appeared to rock Alhassan in the first minute of round two, but after the Tunisian fired off a barrage of strikes, Alhassan roared back with a barrage of his own. Moments later, Lazzez put his opponent on his back and worked from side control, but the two were stood up by referee Dan Movahedi. Another series of strikes followed by Lazzez before a takedown, but again there was a quick standup by Movahedi just before the end of the round.

A knee a minute into the final round landed flush on Alhassan’s chin, but the Ghana native took it well and locked up with his foe, subsequently scoring with a takedown that Lazzez rose quickly from. Lazzez returned the favor and was able to keep the fight grounded until the closing seconds of the round, when Alhassan got in one last flurry. 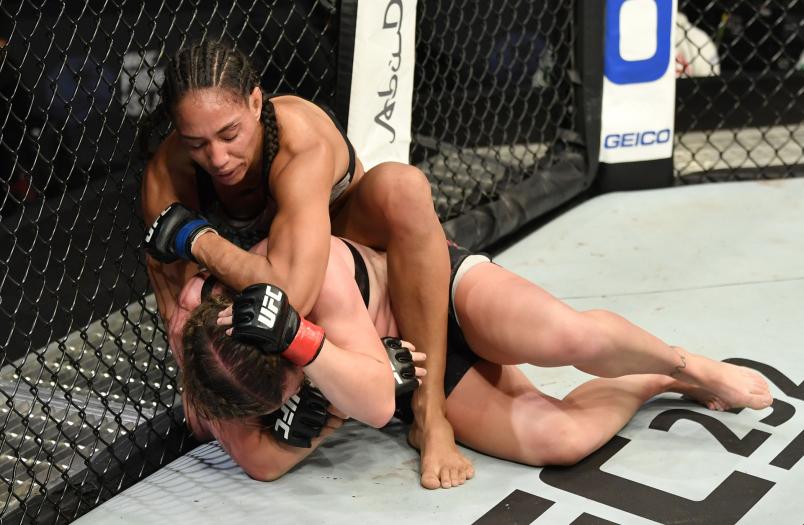 Following a loss in her Octagon debut last year, Taila Santos was in top-notch form as she got into the UFC win column for the first time, taking a unanimous decision victory over flyweight contender Molly McCann.

McCann had some positive moments with her fists in the opening round, but it largely belonged to Santos, who put in a complete effort with kicks, knees in the clinch and a takedown.

The second was another dominant frame for the Brazilian, who logged a couple takedowns and a D’Arce choke attempt, leaving McCann with some work to do in the final five minutes. And while “Meatball Molly” kept fighting until the end, Santos was one step ahead throughout, allowing her to take the victory via three scores of 30-27.

In a featherweight clash of bantamweight contenders, it was Jimmie Rivera winning a three-round unanimous decision over Cody Stamann.

Rivera’s fast hands served him well in the first round, even though Stamann had some success in scrambles and in the clinch.

Stamann got a takedown to start round two, and though Rivera rose immediately, the Michigan native wouldn’t let his opponent free just yet. With 3:45 left, Rivera reversed position and got a quick takedown of his own, and once standing, he kept his lead in the standup game.

In the third, Stamann pressured Rivera in search of a takedown, but the New Jersey product’s defense was strong, and his striking remained on point at distance, leading to a hard-fought victory.

Elliott’s frenetic movement and frequent kicks kept Benoit off-balance in the early stages of the fight, but Benoit eventually found his range and landed some hard shots, including a head kick. The Texan’s takedown defense was solid, too, with only one getting through by Elliott late in the round.

The action heated up in the second, with Benoit’s hands looking sharp, but in the midst of one of the exchanges, the fight went to the mat, Elliott getting into the full mount position briefly. In an ensuing scramble, Benoit nearly locked up a kneebar, but the ultra-tough Elliott got loose and the two stood with under a minute left. Benoit got in some more hard punches upstairs, leading to an Elliott takedown and some ground strikes just before the horn.

Elliott kept his work rate high in the final round but looked to hurt his right hand in the midst of the action. That didn’t stop Elliott, who used his jab to keep Benoit at bay. Benoit was still throwing hard, and when he landed, Elliott knew it, even if that didn’t slow him down.

Calvin Kattar moved closer to the title picture at 145 pounds in the UFC Fight Night main event on Wednesday as he won a five-round unanimous decision over ultra-tough Dan Ige on Fight Island.

After a brief feeling out process, Ige had an early advantage as he shot in and out with quick combinations. A couple minutes in, Kattar began finding his range and he was landing hard shots, prompting Ige to look for a takedown that came up empty. Conversely, Kattar was able to do some solid groundwork with his strikes, and while both fighters landed flush in the final minute, it was Kattar flurrying and landing as the round ended.

Ige landed the best punch of the fight in the second, as a left landed on Kattar’s nose, drew blood and was visibly bothering the New Englander. The shot gave Ige some momentum in a solid round, but again, Kattar finished strong with his own striking attack.

Doing a solid job of mixing up the role of aggressor and counterpuncher, Ige continued to score well in the third, with Kattar landing hard shots but firing only in spurts as he followed his foe around the Octagon.

Kattar drilled Ige with a right hand early in round four, but in an ensuing scramble, the Hawaiian took more shots while on the mat. Shaking off the offensive outburst, Ige got back to his feet and back to the game plan. Kattar was getting busier, though, working behind his jab to set up power shots, and the wear of the fight was evident on Ige’s face.

In the fifth, Kattar was still sharp as Ige looked to be tiring. The Hawaiian didn’t stop marching forward, but Kattar was able to elude any danger, and that included tossing aside any takedown attempts by his foe as the two went the five-round distance.