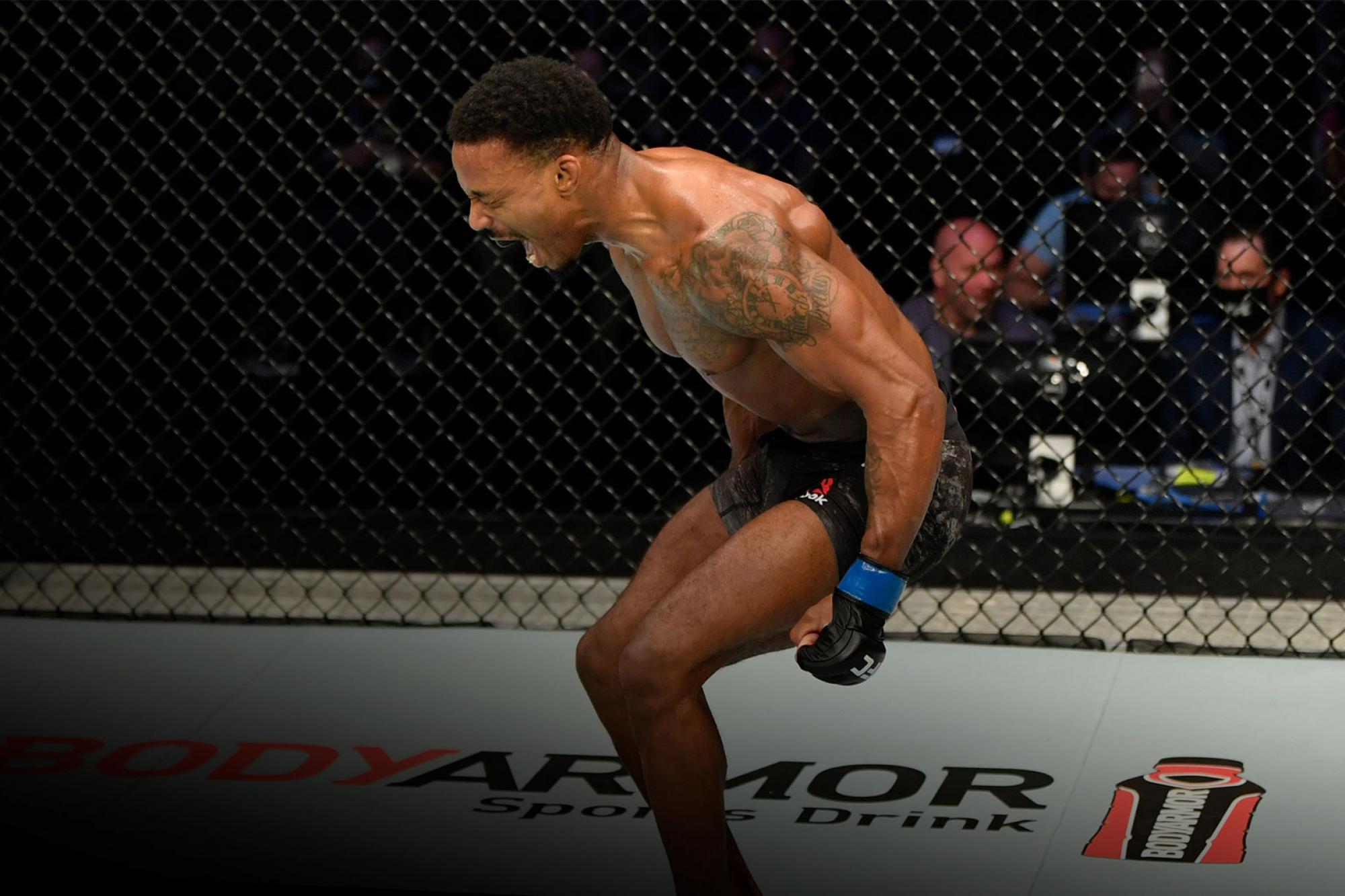 Mounir Lazzez took home a unanimous decision victory on Fight Island and talked about what it felt like to make his debut.

What a scrap from welterweights Mounir Lazzez and Abdul Razak Alhassan. From bell-to-bell both fighters brought it, looking to finish the fight and show off their arsenal of skills in doing so. After three rounds of fast paced action, Lazzez was able to earn a unanimous decision victory, earning two 30-27 nods and one 29-28 scorecard from the judges.

In the early moments of the fight, Alhassan unloaded massive power strikes, determined to call it an early night at the office, but Lazzez brushed off the strikes and smiled back at his opponent. Once Lazzez was able to handle Alhassan’s initial onslaught it was time for “The Sniper” to implement his game plan of knees, leg kicks and elbows.

Lazzez, whose record is now 10-1, also showed off his grappling game in the bout. He secured multiple timely takedowns and was able to land some nice ground strikes. Alhassan made the most of his time on the feet, continuing to throw power shots in flurries until the final bell.

It was an impressive display of durability from both fighters and a great debut for Lazzez. If you want to leave a good first impression, work your way onto the bonus sheet. Lazzez did just that.

Performance of the Night
Lerone Murphy

What a sophomore performance from Lerone Murphy. “The Miracle” impressed many in his UFC debut, fighting to a draw with the talented Zubaira Tukhugov, and he turned even more heads with his UFC Fight Island 1 TKO victory over Ricardo Ramos.

Murphy, who moved to 9-0-1, displayed just how devastating his ground-and-pound game is, positioning Ramos close to the fence and raining down heavy punch after heavy punch from inside Ramos’ guard. Once a few of his power shots snuck through, it was evident that Ramos was hurt, and the referee was forced to step in before the first round concluded.

Manchester, England’s Murphy has set himself as a true prospect to watch going forward in the featherweight division. It will be interesting to see what the matchmakers give him next.

Lerone Murphy gets the first-round stoppage over Ricardo Ramos on Fight Island.

It could not have been more of a dominant UFC debut for Sweden’s Khamzat Chimaev, who controlled every second of his bout with John Phillips. Right away, Chimaev brought Phillips to the canvas and then battered him with strikes for the entirety of the first round.

Chimaev followed the blueprint of the first round in the second, opening with a takedown and softening Phillip’s defenses until he was able to sink in a D’Arce Choke for the win. Chimaev moved his undefeated record to 7-0 and is definitely someone to keep an eye on at middleweight.

Modestas Bukauskas talks about his knockout victory in his UFC debut on Fight Island.

Lithuania stand up. It was a debut that Modestas Bukauskas won’t soon forget, as the light heavyweight fighter earned a stoppage victory in the closing moments of the first round against Andreas Michailidis.

At the end of a very back-and-forth opening frame, Bukauskas was able to land some crushing elbows to the side of Michailidis’ head in the clinch. The horn sounded and it was clear that Michailidis was too hurt to get to his feet, thus convincing the referee that he could not continue. Bukauskas improved his record to 13-3 with the win.

Bukauskas is an interesting add to a developing crop of young light heavyweight fighters. It will be fun to see him mix it up with some other talented prospects in the future.