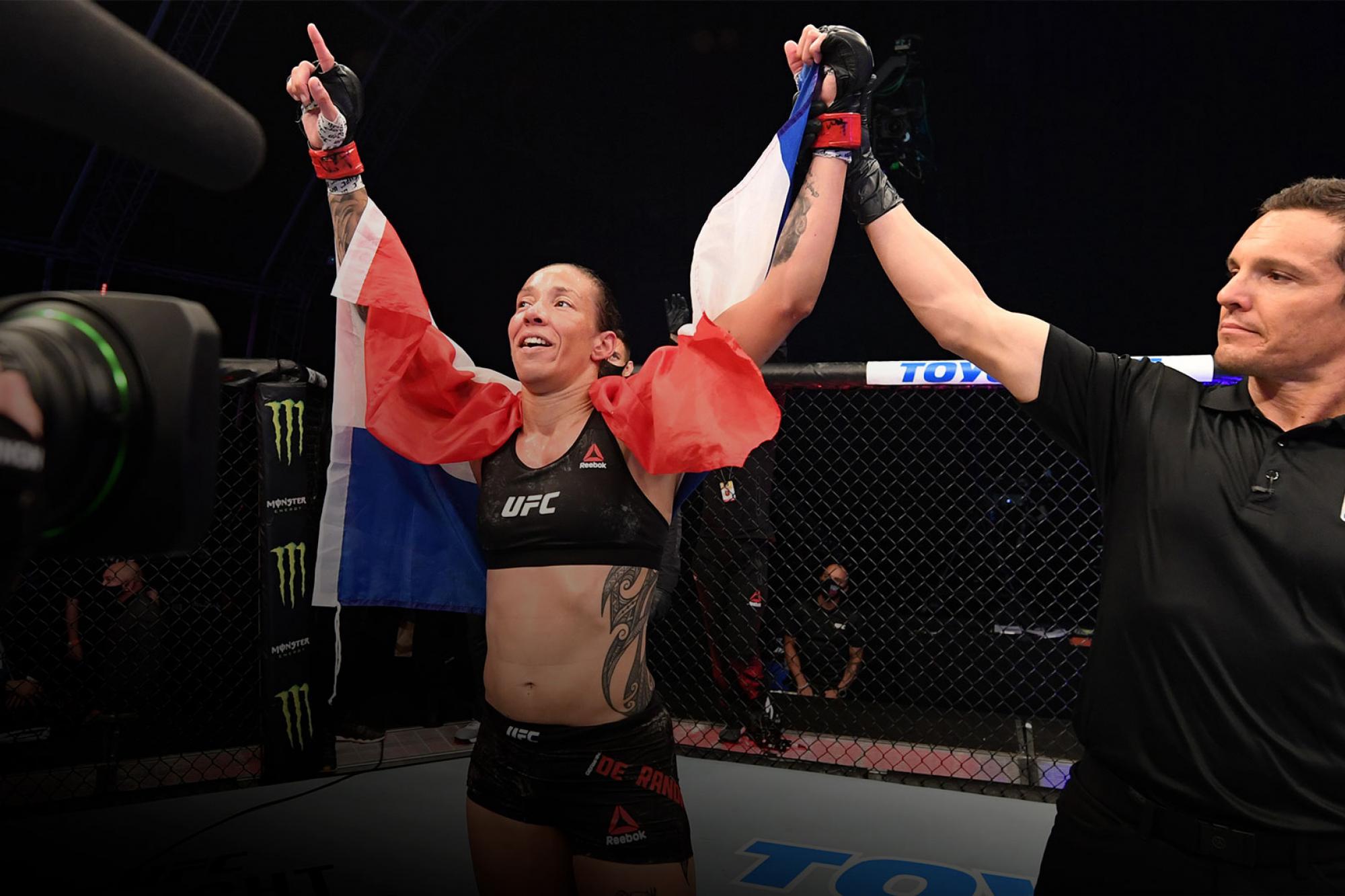 Performance of the Night

What a time to get your first career victory by submission. Germaine de Randamie continues to show the UFC brass and the world that she is truly a top contender at bantamweight and featherweight. De Randamie’s guillotine submission in the third round against the highly regarded Julianna Pena showed just how resilient and dynamic the 36-year-old Dutch fighter is.

It was an up and down fight for de Randamie, who admittedly took some time to “wake up” during the matchup. Her world class striking helped her keep the aggressive Pena at bay for a majority of the bout, but that didn’t mean Pena didn’t have her moments.

Pena was able to wrangle the former featherweight champion to the canvas on multiple occasions, but it was her last attempt that cost her the bout as de Randamie sunk in a deep guillotine that shut Pena’s lights off. It was a surreal moment for the famed kickboxer, who couldn’t hold back the excitement of the moment.

She once again solidified that she is the number one contender and that anyone that would like to challenge Amanda Nunes for the bantamweight strap will need to get through her first.

De Randamie moves to 10-4 with the victory and is keen to make her mark in exciting bantamweight bouts in the near future.

From Backstage: “I’m a kickboxer and they all want to take me down. If you take me down, I choke you out. I’ll fight whoever. I just want to fight entertaining fights against people who come to fight. That’s all I want,” de Randamie told UFC.com post-fight. “I’m still the number one. It doesn't matter what happens tonight, that winner has to face me before they face Amanda Nunes. I’m the No. 1 contender. Let Amanda Nunes enjoy her family. You’ve got to face me.”

The Matrix is officially on the scene. Back-to-back bonuses from the bantamweight prospect have him firmly on the map as a fighter to keep your eye on. Kyler Phillips made waves on The Ultimate Fighter season 27 and on Dana White’s Contender Series, where he earned a finish in less than a minute but still didn’t punch his ticket to the UFC.

So, when he made his promotional debut at UFC Norfolk, he made the most of the opportunity. His bout with Gabriel Silva earned Phillips a $50,000 Fight of the Night bonus. What did he do as an encore at UFC Fight Island 4? Earn another bonus.

This time the bonus came as he finished newcomer Cameron Else early in the second round. His ground-and-pound was too much for the Englishman and it's easy to see why the 8-1 Phillips could be a real force at 135 pounds.

From Backstage: “Of course there are levels to this, but it was expected. I was expecting to finish him,” Phillips told UFC.com post-fight. “That guy came to fight. That guy came to knock me out. He’s got a heavy right hand. I’m glad I was able to overcome it.”

Staying undefeated wasn’t Dusko Todorovic’s priority, but that’s exactly what the Contender Series alum did. Despite some criticism about his frame, Todorovic showed that he is more than equipped to handle the big boys at middleweight.

Todorovic faced the 6’3” Dequan Townsend at the Flash Forum on Saturday night, utilizing his grappling to take the fight to the canvas. It was there that Todorovic showed his deadly jiu-jitsu and ground-and-pound. While Townsend continued to fight back and have brief moments, it was clear that Todorovic was in control of the bout.

The fighter from Serbia was able to finish the bout by TKO in the second round and showed that he is definitely a fighter with plenty of potential.

From Backstage: "I think I’ve shown I’m versatile. Lots of people say I’m too small for middleweight. Dequan is an ex-light heavyweight,” Todorovic told UFC.com post-fight. “I think I've shown everyone that my body is well fit for middleweight and that I belong here. I belong in the UFC.”

There is no doubt that Luigi Vendramini started UFC Fight Island 4 off with a bang. It took “The Italian Stallion” less than 1:30 to finish Jessin Ayari by TKO. It was an incredible moment for the Brazilian, who not only lost his UFC debut against the deadly Elizeu Zaleski dos Santos but suffered a major injury in the contest as well.

It took two years of rehabilitation for Vendramini to get back into the Octagon and he wasted no time making sure people will remember his name. Vendramini poured on combinations and smothered Ayari, forcing the referee to come to the German’s rescue.

And just like that, Vendramini is 9-1, with nine finishes, and is a fighter that if healthy, has a ton of potential.

From Backstage: I debuted in the UFC and lost. I don’t feel like a UFC fighter when I lose. I had to win against somebody,” Vendramini told UFC.com post-fight. “Now, I’m a UFC fighter. All my fights in Brazil, I do this. I did what I was born to do—knockout people or submit people.”