Preview All The Upcoming Match-Ups On UFC Fight Night: Rodriguez Vs. Waterson
By E. Spencer Kyte, on Twitter @SpencerKyte • May. 3, 2021

Top 10 strawweights shift up a division for this short-notice bout as Marina Rodriguez squares off with Michelle Waterson.

After competing only once last year, Rodriguez got her 2021 campaign off to a fantastic start in January, registering a second-round knockout win over fellow Brazilian rising star Amanda Ribas. The 33-year-old Muay Thai practitioner suffered the first loss of her MMA career in her previous fight, landing on the wrong side of a split decision verdict against former champ Carla Esparza, but now looks to build off the most explosive effort of her UFC career.

Waterson is looking to build off a split decision win over Angela Hill back in September. The 35-year-old veteran has been a fixture in the Top 10 for the last several years, sharing the Octagon with the division’s elite, and she can put herself right back into the thick of the title chase with a victory this weekend.

Veteran gunslinger Donald Cerrone looks to halt the longest winless streak of his career in this short-notice showdown with the always-entertaining Alex Morono.

You had to know that Cerrone was going to remain on the card when he lost his dance partner last week, as “Cowboy” truly lives by the “anyone, anywhere, any time” mantra. Without a victory since the spring of 2019 when he beat Al Iaquinta in Ottawa, Ontario, this is a critical matchup, even on short notice, for the 38-year-old proprietor of the BMF Ranch, who has been one of the most active, popular, and  consistently entertaining fighters on the UFC roster since matriculating to the Octagon from the WEC in 2011.

Morono entered 2020 on a three-fight winning streak, only to have his run of success ended in sudden fashion — at home in Houston, no less — by Khaos Williams. Nine months later, “The Great White” got back into the win column with a hard-fought victory over Rhys McKee, before making a quick turnaround and dropping a decision to Anthony Pettis on the final fight card of the year.

Both men are known for their willingness to step into the fray and put on a show, so don’t be surprised if this last-minute pairing becomes a potential Fight of the Year contender this weekend. 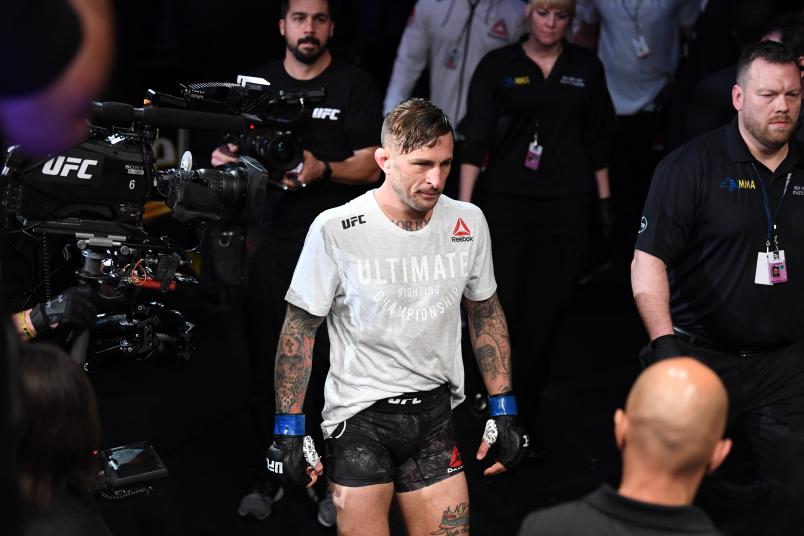 Gregor Gillespie walks to the Octagon prior to his lightweight bout against Kevin Lee during the UFC 244 event at Madison Square Garden on November 02, 2019 in New York City. (Photo by Josh Hedges/Zuffa LLC)

Talented lightweights looking to get back into the mix in the loaded 155-pound weight class collide on Saturday as Diego Ferreira makes his second start of 2021 against returning wrestler Gregor Gillespie.

Entering the year on a six-fight winning streak, Ferreira suffered a setback in his quest to rise to the top of the division in his initial appearance of the year, landing on the wrong side of a split decision verdict in a competitive, entertaining scrap with Beneil Dariush at the start of February. The Fortis MMA product is crafty on the ground and carries power in his hands, making him a tough assignment for anyone looking to crack the Top 10.

Gillespie was expected to end his extended hiatus last month against Brad Riddell, but the bout was scrapped the day of the contest for COVID-19 protocol reasons. Now the once-beaten standout from Long Island steps in against Ferreira, looking to recapture the form that carried him to 13 consecutive victories to start his career and finishes in five of his first six UFC appearances.

Welterweight combatants positioned alongside one another in the Top 10 meet on Saturday’s main card as one of the most active fighters on the roster, Neil Magny, squares off with talented Dana White’s Contender Series grad Geoff Neal in a pivotal pairing in the 170-pound weight class.

Magny makes the walk for the second time in 2021 this weekend, looking to rebound from a unanimous decision loss to Michael Chiesa in January. The Elevation Fight Team member has not lost back-to-back contests since the nascent days of his UFC career, posting a 16-5 record with victories over Tim Means, Kelvin Gastelum, Carlos Condit, Li Jingliang, and Robbie Lawler over the last eight years and counting.

Neal returns after landing on the wrong side of a unanimous decision loss to Stephen “Wonderboy” Thompson in his lone appearance of 2020. The fact that Neal was even competing was impressive, given that he was hospitalized with sepsis and heart failure in the summer. Healthy and having shaken off the rust, “Handz of Steel” will look to set the tone for the Fortis MMA team on Saturday by securing a victory ahead of Ferreira’s fight with Gillespie.

These two were scheduled to meet last summer before Neal fell ill, so there is some familiarity on both sides, adding further intrigue to this outstanding welterweight pairing. The 170-pound ranks are re-organizing themselves at the moment and the winner of this one has a chance to take a major step forward into the championship mix with a decisive effort on Saturday. 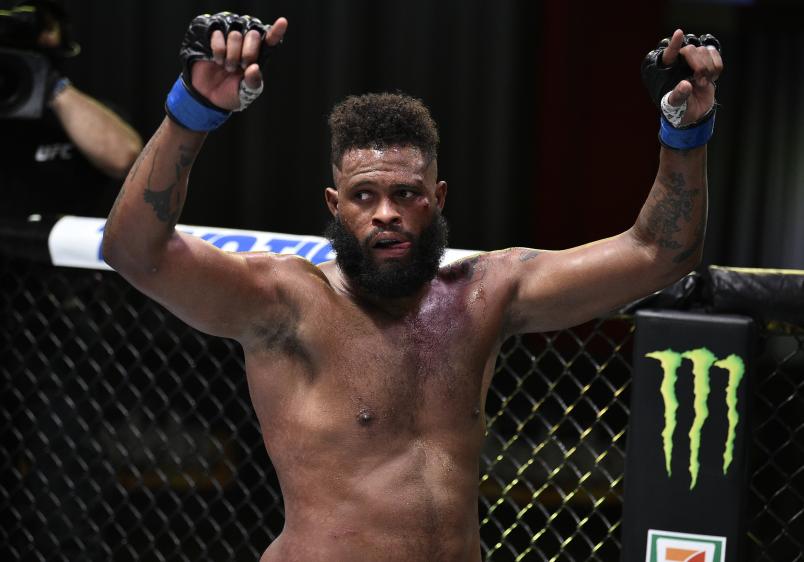 Maurice Greene celebrates after his submission victory over Gian Villante in their heavyweight fight during the UFC Fight Night event at UFC APEX on June 27, 2020 in Las Vegas, Nevada. (Photo by Chris Unger/Zuffa LLC)

Heavyweights who aren’t particularly fond of leaving their fate in the hands of the judges collide here as Maurice Greene takes on Marcos Rogerio de Lima.

A contestant on Season 28 of The Ultimate Fighter, Greene began his UFC tenure with three straight victories, but has stumbled to just a single win in four starts after taking a step up in competition. He’s earned seven of his nine career victories inside the distance and showcased his crafty submission game with a third-round arm-triangle choke win from bottom over Gian Villante last summer.

Like his opponent this weekend, de Lima matriculated to the UFC through The Ultimate Fighter series, competing on Season 3 of The Ultimate Fighter: Brazil. The 35-year-old has alternated wins and losses over his last 10 fights, with only one of those contests going the distance and seven ending inside the first round.

Given their joint propensity for finishing fights, this should be an explosive affair for as long as it lasts on Saturday night.

The first pair of ranked strawweights to hit the cage on Saturday night, Amanda Ribas and Angela Hill face off in what should be a competitive affair.

Ribas earned victories in each of her first four Octagon appearances to establish herself as one of the rising stars on the UFC roster. Her momentum took a hit in January when she ran into Rodriguez, but the effervescent Brazilian gets a chance to quickly rebound here by taking on one of the most active and experienced fighters in the division.

Following a frustrating 3-5 run to start her second stint on the UFC roster, Hill shifted her approach to fighting, viewing it more as a job while looking to “punch in” as frequently as possible. Since then, the TUF 20 contestant has posted a 4-2 record with those two setbacks coming by split decision in highly competitive scraps with Claudia Gadelha and Waterson.

After fighting four times in 2020, “Overkill” began her 2021 campaign with a victory over Ashley Yoder in March, and she looks to make it two straight on Saturday.

Which one of these women will take a step forward in the strawweight division this weekend and which one will be forced to regroup heading into the second half of the year? 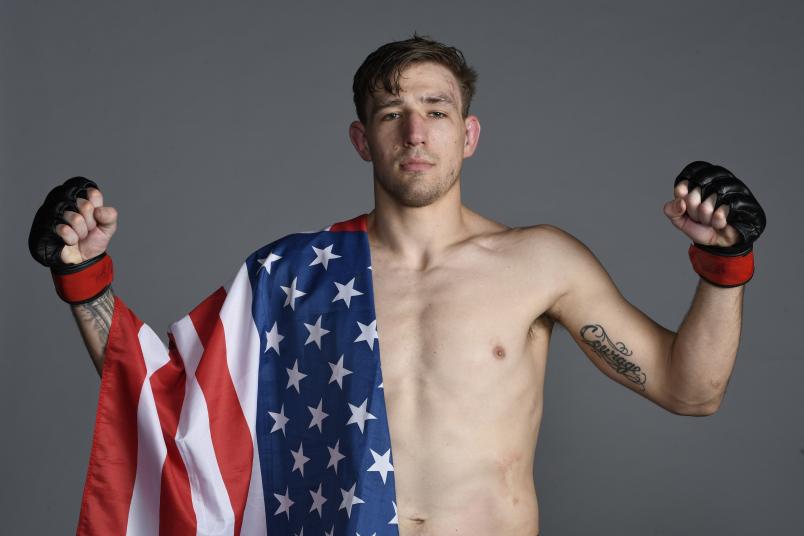 Kyle Daukaus poses for a portrait backstage during the UFC 255 event at UFC APEX on November 21, 2020 in Las Vegas, Nevada. (Photo by Mike Roach/Zuffa LLC)

It’s an outstanding matchup in the middleweight division, as Phil Hawes and Kyle Daukaus square off in a battle of elite prospects.

It took Hawes a little longer than anticipated to reach the UFC, but the Sanford MMA representative has wasted little time making an impression in the 185-pound weight class. After registering an 18-second stoppage win over Jacob Malkoun in his promotional debut, the 32-year-old Hawes pushed his record to 10-2 overall with a hard-fought majority decision win over another prospect, Nassourdine Imavov, in February.

One of a handful of former CFFC champions on the UFC roster, Daukaus turned in a solid effort in defeat in his debut, suffering the first loss of his career in a June assignment opposite Brendan Allen. The 28-year-old rebounded with a unanimous decision triumph over Dustin Stoltzfus in November and is aiming to join his older brother Chris as a ranked UFC fighter before the year is out. 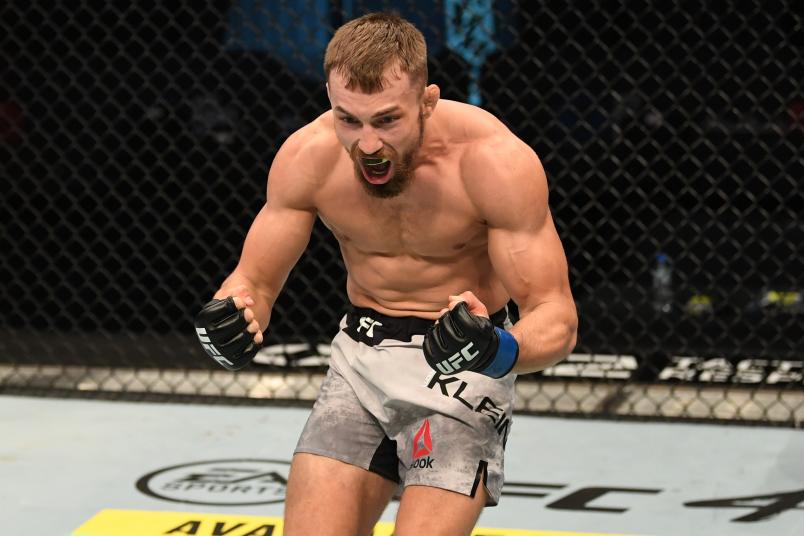 Ludovit Klein makes his second appearance inside the UFC cage this weekend, looking to build on his impressive debut as he takes on returning recent TUF winner Michael Trizano in an intriguing featherweight tilt.

The first Slovakian fighter signed to the UFC roster, Klein made a splash in his first trip into the Octagon, finishing Shane Young in 76 seconds last fall. Currently riding an eight-fight winning streak, the 26-year-old has earned 11 of his last 12 wins inside the distance and carries a 17-2 record overall into Saturday’s contest.

Trizano won the lightweight competition on Season 27 of The Ultimate Fighter, and then followed up his victory over Joe Giannetti with a split decision triumph over Luis Pena. He dropped to featherweight for his next bout, losing to surging upstart Grant Dawson, and he has been sidelined ever since due to myriad injuries.

Can Klein make it 2-for-2 in the UFC or will Trizano end his nearly two-year hiatus with a return to the win column this weekend? 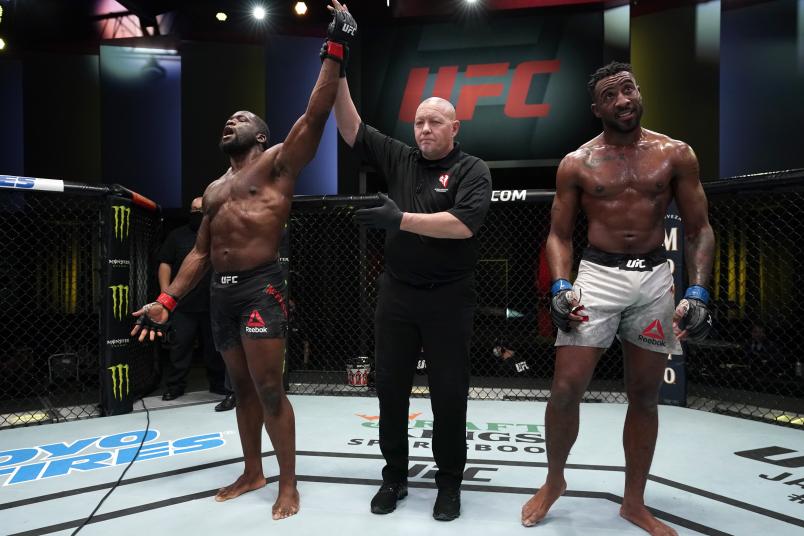 Tafon Nchukwi of Cameroon reacts after his victory over Jamie Pickett in a middleweight fight during the UFC Fight Night event at UFC APEX on December 19, 2020 in Las Vegas, Nevada. (Photo by Cooper Neill/Zuffa LLC)

In a 185-pound matchup, Junyong Park looks to extend his winning streak to three as he stands in with Contender Series graduate Tafon Nchukwi.

The 30-year-old Park carried a seven-fight winning streak into his promotional debut in Shenzhen, China, where he lost to Anthony “Fluffy” Hernandez. Since then, “The Iron Turtle” has posted back-to-back unanimous decision victories over Marc-Andre Barriault and John Phillips to push his record to 12-4.

Nchukwi earned his UFC contract with a second-round stoppage win over Al Matavao last fall in Las Vegas, and then picked up a unanimous decision win over Jamie Pickett three months later in his promotional debut. The unbeaten 26-year-old is still in the developmental stage of his career, but he looks like the kind of athlete that could make an impact in the middleweight division over the next couple of years.

Welterweight finishers Christian Aguilera and Carlston Harris clash in what should be an explosive preliminary card affair on Saturday night.

Aguilera debuted with a bang last summer, stopping Anthony Ivy in 59 seconds to register his first UFC victory and extend his winning streak to three. He had the unfortunate pleasure of sharing the cage with Sean Brady in his sophomore outing, losing to the streaking prospect, but now looks to rebound as he welcomes Harris to the Octagon for the first time.

A native of Guyana fighting out of Rio de Janeiro, Brazil, the 33-year-old Harris sports a 15-4 record overall and carries a three-fight winning streak into his promotional debut this weekend. The newcomer holds victories over current UFC talents Michel Pereira and Wellington Turman and has earned three straight stoppage victories since dropping the Brave CF welterweight title to Jarrah Hussein Al-Silawi in the fall of 2018.