"I really appreciate individuals that are badasses, but focused and dedicated. They show up and work, wave respectfully, and go on." - Jimmie Johnson 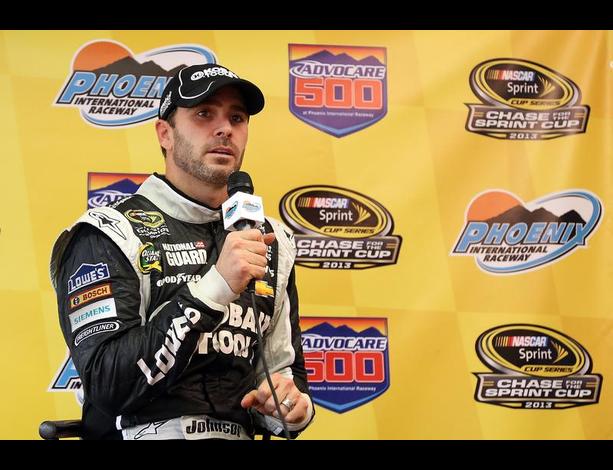 As one of the most decorated NASCAR drivers of this era, Jimmie Johnson hasn’t reached the pinnacle of his sport by being complacent. So as he enters Sunday’s Ford EcoBoost 400 at the Homestead-Miami Speedway in Florida, he isn’t resting on his laurels despite being on the verge of a sixth Sprint Cup Series title. In fact, he likens his status heading into NASCAR’s season finale to a fighter entering a bout as a heavy favorite.

“I’m just trying to keep things normal the best that I can, although this week is completely different than any other week in the year,” said Johnson. “You try to find things to keep it normal, and it’s not easy. Your mind slips and wanders, and there are some great correlations to a fight. Even if the stats show that it’s an advantage one way, the person with the advantage can’t go into that fight thinking any differently; you’ve got to go in and take your opponent seriously and treat them all the same and have respect for what’s gonna happen. If you don’t, it can backfire on you. So I’m trying to treat this, as much as I can, as any normal weekend where I have to go out there and win this race.”

And while he’ll be trying to win and earn yet another victory, with leads of 28 and 34 points on Matt Kenseth and Kevin Harvick, respectively, he only has to finish 23rd or better to clinch the title. Some would say Johnson could ride the brake and still pull that off, but he’s not approaching the race this weekend – or any race for that matter – like that. He’s too proud and he’s worked too hard to get here.

“I work so hard that it feels great to have the accomplishments and the emotions that come with it, but I know the following week and the following year is there and you’ve got to do it all over again,” he said. “One thing I pride myself on is working hard and work wears on you. The success that comes with it, if you’re fortunate to experience it, that’s what motivates you to do it again, because I guarantee there’s nobody that works as hard as I do or this team does, and those moments keep you going.”

Again, it’s similar to the journey a mixed martial artist goes through, and this week, one of the fighters Johnson recently met and spent some time with, number one welterweight contender Johny Hendricks, gets his chance to hit the Winner’s Circle when he faces off with champion Georges St-Pierre in the main event of UFC 167 in Las Vegas this Saturday.

“He seems like a super cool guy and certainly someone focused and dedicated and ready to roll,” said Johnson of Hendricks. “It was great to meet him and I’ve tuned in a lot more to a variety of fights and programming since our sport moved over to FOX Sports. Between our races there’s a fight or a recap, so that’s helped pull me in more and more. I also find myself chatting with Kevin Harvick a lot more about fights because he’s so involved and well-versed in it all.”

But Johnson is no newbie to the sport, having graduated from high school with WEC and King of the Cage veteran Charlie Kohler, who competed in MMA professionally from 1998 to 2007.

“His involvement and watching him train and seeing his focus with martial arts was always interesting and appealing to me, and I always respected him for the dedication he had in pursuing fighting,” said Johnson, who also enjoys the sport for the unique relationship the fighters have with one another.

“I think it’s the personalities,” he said of the appeal of MMA to him. “The fact that these guys have the level of respect they do for one another and climb in the ring beat the fire out of one another and shake hands and go on, there’s an element to that that I respect in competition. Granted, it’s not a direct comparison to what we do, but I really pride myself on having respect for others, although I want to go out there and smash them on the track. So there’s something there that really correlates with me. The world of self-promotion and hype, it wears on some people, and I’m one of them. I’m just kind of through with all the hype and the flash, and I really appreciate individuals that are badasses, but focused and dedicated. They show up and work, wave respectfully, and go on. And that’s really what I see in the bulk of the fighters that I watch. It’s different in that respect, and I really appreciate that.”

Top drivers like Johnson and top fighters like Hendricks don’t need hype and self-promotion; the proof is on the track and in the Octagon. And if Johnson walks away with his sixth title this weekend, that just means it’s time to start planning for number seven.

“If things go well, there’s a media circus that follows, but without a doubt my crew chief will be at the race shop working again on Monday morning,” he said.